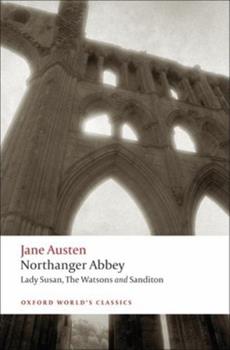 '...in suspecting General Tilney of either murdering or shutting up his wife, she had scarcely sinned against his character, or magnified his cruelty.'Northanger Abbey is about the misadventures of Catherine Morland, young, ingenuous, and mettlesome, and an indefatigable reader of gothic novels. Their romantic excess and dark overstatement feed her imagination, as tyrannical fathers and diabolical villains work their evil on forlorn heroines inisolated...

Published by Thriftbooks.com User , 13 years ago
I've always been a little hesitant to read any Austen novels, because I didn't think I was going to get anything out of them, and they would be hard to understand due to the different jargon involved. This book solves that problem. They give Austen's back story, have a timeline of important events that were going on at different parts in her life, so you can get a sense of what kind of world she was living in. Another great point is the glossary of terms in the back of the book. They even describe real places that are mentioned in the storyline, such as shop names. It's quite a good read and I believe it's the first time I've actually been taught something by a fictional novel. The only downside is that the characters they use to show you which terms in the story are in the glossary detract from the reading experience. They're kind of difficult to get past if you already know your stuff. SUGGESTION: If you're new to 19th century literature and are bad with geography, this book is going to be great for you. If you already know Jane Austen and are looking to add to your book collection, I wouldn't pick this one up.

A 'nice' collection of early Austen and a few out-takes

Published by Thriftbooks.com User , 16 years ago
This book brings together Austen's earliest novel, Northanger Abbey (although it was not published for many years after completion), with some of her earlier works and her final, unfinished, piece Sanditon. This edition also has a fine introduction, which gives an interesting view of Austen's works and fleshes out some of the details surrounding the three lesser known works. Northanger Abbey is, of course, the best known of these works, and a review follows below. Of the other three pieces, Lady Susan is the only completed one. It follows the epistolary format that Austen experimented with extensively in her early career, but ultimately abandons the format, a little disappointingly. It is an engaging piece, and the Lady Susan of the title is a vivacious, although reprehensible, character. Lady Susan has by far the strongest voice of the piece, but it is unclear whether she is truly intended as the heroine, or whether our sympathies should lie with her hapless daughter Frederica. Lady Susan is certainly a much more determined flirt than any of Austen's other major characters, and much older too (although perhaps not wiser). The Watsons is a much shorter fragment, also dating from Austen's earlier career. It is darker in tone than her other works, and seems to tend more towards realism. It seems that this may be one of the reasons she chose not to finish the piece, although it seems that she ultimately intended for the piece to have a happy ending. Sanditon is Austen's final work, begun shortly before her death and, sadly, never finished. The piece appears to have had a great deal of scope, describing the life and a times of the seaside resort of Sanditon. The tone and outlook of the piece are surprisingly upbeat, given the poor state of Austen's health as she was writing. I hear that authors never like people to pick their early works as their best, but I've always had a sneaking fondness for Northanger Abbey. Luckily, Jane Austen is unlikely to complain about me liking one of her earliest works. The novel's appeal is its extremely likeable anti-heroine, Catherine Morland. Catherine's appeal is her innocence and above all her fallibility. Of course, none of Austen's heroines are perfect, but Catherine has a charm that Austen's more self-possessed characters like Emma Woodhouse and Lizzie Bennett lack. For this reason, I would say that Northanger Abbey can be a good introduction to Jane Austen, especially for younger readers, who may identify more readily with Catherine's naivete than with some of Austen's more mature characters. As ever, Austen is in fine satirical form, but she and her characters stop short of outright mocking the fanciful Catherine and her unfortunate novel-reading habits. As one might expect, the novel ends with Catherine's reform, redemption would perhaps be too strong a term to use here, and Austen allows the imperfect Catherine to shine among a sea of other imperfect characters. (Naturally, some are more imperfect

Published by Thriftbooks.com User , 20 years ago
While this was one of the last Jane Austen novels published, it was the first one to be written. I read this book before I was familiar with the conventions of the Gothic novel, but this book is a worthy send up of all of those conventions. Even if you are not especially familiar with the works of Anne Radcliffe or Monk Lewis, this novel is worth your time. The opening three pages which describe why Catherine Morland really isn't the heroine type are as funny as anything you'd read today. Other great passages are when Austen defends the reading of fiction in a passionate aside, and when Catherine becomes convinced that General Tilney is keeping his wife locked up in the dungeon of Northanger Abbey.In this book, we have the beginnings of Jane's devastating wit as she tears apart society. We also have the benefit of some witty one liners, flighty characters and hilarious situations. (Of special note is the fact that it would seem that college men have ALWAYS been drinking and swearing type guys... although Austen discretely blanks out the 'dirty' words so as not to offend her readers.) I used to rush home from work to read this book, and was not disappointed in it at all, from beginning to end. This is the best place to start with Austen (well, you could also read her juvenilia if you want... it is more silly than anything, but entertaining nonetheless), and it's definitely a fun read.

A beautifully written satire of the Gothic novel

Published by Thriftbooks.com User , 21 years ago
Jane Austen was arguably one of the best writers of her time; however, only she took the bold leap into poking fun at the books of her time. Northanger Abbey brings Catherine, the heroine (on whom, among other things, Austen periodically comments from afar) through the joys and troubles of being an eligible young lady with a probing mind and endearing naivete, acquired from none other than the countless novels she has read. The elegance, and at some points speed, with which Austen plays out and then reconciles her young heroine's difficulties is at the very least extremely amusing. The foolish suspense and embarrassed relief which center around the Abbey are no less entertaining when one considers this book against darker novels where the papers in locked drawers have slightly more bearing. Catherine's friend Isabella, her vain (and in-vain) suitor John, and Mr. and Miss Tilney are brilliant foils for her character's development. Overall, I think this book rates as one of the true gems of the 19th Century.

A hilarious sendup of the Gothic novel

Published by Thriftbooks.com User , 22 years ago
I used to love Gothic novels. I collected out-of-print Victoria Holt paperbacks, I had stuffed animals named after characters in Charlotte and Emily Bronte novels, but ever since I've read Northanger Abbey, I can't read a Gothic novel with a straight face. Jane Austen does a marvelous job of sending up convoluted scary novels (and melodrama in general) in this book, and creates her most masculine and fascinating hero, Henry Tilney.Don't think that Catherine Morland, the heroine, is just a naive kid. Her naivete is a necessary component of the novel, as it allows her to see the wider world with fresh eyes, provide a foil to the more worldly characters, and ultimately capture the heart of the hero. And then there's Henry...he teases, he teaches, he forgives Catherine's regrettable fancies, knowing that he had a hand in encouraging them. He's witty, he's charming, he's kind of a slob, and he wears his greatcoats so well!As in all her novels, Jane Austen provides a great host of hilarious supporting characters, in particular John and Isabella Thorpe and Mrs. Allen. I defy anyone not to laugh at John Thorpe's nonsensical and contradictory comments. One wonders how many such "rattles" wearied Miss Austen's attention to provide such a character study.Great writing, great story, great characters...come to Northanger Abbey with a sense of humor and you will not be disappointed.
Copyright © 2020 Thriftbooks.com Terms of Use | Privacy Policy | Do Not Sell My Personal Information | Accessibility Statement
ThriftBooks® and the ThriftBooks® logo are registered trademarks of Thrift Books Global, LLC