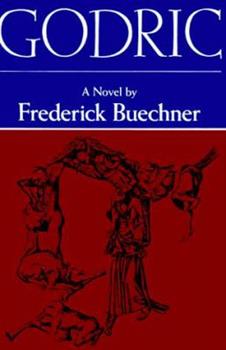 Frederick Buechner's Godric "retells the life of Godric of Finchale, a twelfth-century English holy man whose projects late in life included that of purifying his moral ambition of pride...Sin, spiritual yearning, rebirth, fierce asceticism--these hagiographic staples aren't easy to revitalize but Frederick Buechner goes at the task with intelligent intensity and a fine readiness to invent what history doesn't supply. He contrives a style of speech...

Published by Thriftbooks.com User , 19 years ago
Two thirds of my first time through Frederic Beuchner's re-imagining of the story of Godric, I realized that I had been reading blank verse for page after beautiful page. The beauty, earthy comedy, and plain-spokenness of the tale were so far uppermost in my mind that my ear didn't even calculate the music it was enjoying at first. Godric-Deric-Godericus-Drick-Godric bawls his story with such epic wrathfulness and lullabies it with such unearthly tenderness that we take it for the beating of our own blood, and not the mostly iambic measure. In the same way, Godric's self-knowledge, his all-too-human grief and shame at the imperfect acts of an imperfect life, and his savage irony at the biographer sent to him by his friend, serve to cast his saintliness into the shadows of a life lived ever in the presence of his own shadow self. But if we read with the eye of an open heart, the gentle, courteous irony is that Godric emerges for us much as the saint his medieval hagiographer, Reginald, would have had us believe him to be. Indeed, perhaps more the saint, because Godric makes us party to all the darker details of his struggle toward God. This is not an expose of the unseemly details behind the gilded sweetness of a medieval golden legend. It is an exigesis of a human heart. We are made, by singing Godric's song with him, raging his rages, freezing with him in the River Wear, to understand things at some level that no 20th century mind easily understands--punishing the flesh in freezing water and chafing irons, immuring oneself in a wood with not but a pair of serpents for companions, leaving off a life of prosperity for a life of privation, setting God above any mental, spiritual, or heart's ease, seeing visions, dreaming dreams, groveling in prayer until one's knees are callused, believing to the very depths of self there is a God and that God shows himself to us as the Blessed Virgin, or as a face made of leaves. The Godric of history is said to have been born about the time of William the Conquerer and to have lived a hundred years or more. The time, then, includes some of the same years readers of the popular Brother Cadfael mysteries by Ellis Peters will have encountered. It's a holy side trip from the cozy monastic whodunits to explore the isolated woodlands near Durham, and enter more fully the lives of the poor and dispossessed of those hard times. I have just finished reading this brief book a second time. I'm sure I'll read it many more, for love and pity's sake, for God visiting Godric, and for the music.

Published by Thriftbooks.com User , 19 years ago
So much of the literature of the late Twentieth Century was cynical, formulaic and predictable. Some became bestsellers (Lamb's "I Know This Much Is True"). Others won awards (Anything by Rushdie--whose formula is to be so weird that it must be presumed genius). With such fare glutting the market, it seemed that works could only be distinguished by the depth of suffering and lack of communication. Authors became ever more navel-gazing in their thoughts, faux introspection and angst. What was once innovative and new became trite. The art of subtlety was all but lost. It is amazing that any enduing work could spring from such a milieu. Yet several did.One masterpiece born of the later half of the Twentieth Century was Godric. Godric is the tale of an all too human man. The great theme of Godric is the difference between reality and truth. Godric's triumph is not his own but that of the God who shines through all his weaknesses. Frederick Buechner is a writer of great subtlety and a master of his craft. Filled with earthy wisdom and wonderful truth, Godric is not only one of Buechner's best books--it is one of the greatest books of its time.

Published by Thriftbooks.com User , 21 years ago
I was struck first by the creativity of Buechner. Godric was a historic figure, but Buechner's fleshing him out and delving into his soul were much more fascinating than the interesting historic facts. Secondly I was stuck by how well the story is crafted, in style and character development and progression of the story. There are scattered gems of commentary on human nature and theology. As other reviewers have pointed out, while part of us is appalled at some of Godric's thoughts and deeds, another part of us recognizes these dark shortcomings in ourselves. A book about humanity, sin and grace. Strangely, though a book that is at times raunchy and violent and appalling, it is also an honest book that can strengthen faith. Godric will be hard to forget.

Published by Thriftbooks.com User , 22 years ago
This is one of the greatest novels of the century. The style is unique: raw, earthy, yet poetic. Try reading it aloud and you quickly fall into a singsong rhythm that reinforces, rather than detracts from, the polish of the writing. _Godric's_ themes are deep as Wear, from the nature of friendship to the difference between religion and faith. This is one you'll read over and over; get several copies, since you'll want to loan it often and not everyone will want to give it back!

Published by Thriftbooks.com User , 22 years ago
The lasciviousness and depravity Buechner presents in this medieval monk and the emptiness of his ascetic attempts to discipline his own lusts are enough to disgust the reader -- until the reader begins to recognize that he or she is not that entirely different...This book is dark and oppressive -- but in such a way that the reader is drawn to it, identifying with the miserable struggles of the title character. It's not the easiest of books to read, and not likely the type of feel-good book you'll want to lounge on the beach and read, but it's certainly a book that should not be missed!
Copyright © 2020 Thriftbooks.com Terms of Use | Privacy Policy | Do Not Sell My Personal Information | Accessibility Statement
ThriftBooks® and the ThriftBooks® logo are registered trademarks of Thrift Books Global, LLC