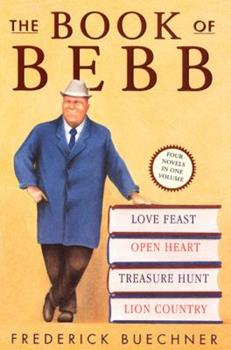 The Book of Bebb

Bebb & Co. Reek With The Joy of Life (And The Afterlife)

Published by Thriftbooks.com User , 18 years ago
Read the four novels that make up The Book of Bebb, and you'll never forget The Rev. Leo Bebb, one of the best-drawn characters in modern American literature. He lives, he breathes, he exposes his private parts, he raises the dead, he stands before the congregation with a Bible in one hand, reminding them that "charity" is the greatest virtue---and he's got his other hand out to receive the bounty of that charity.A half-holy conman who seems sincere down to his questionable core, Bebb is a blend of Jimmy Swaggart, WC Fields, Walt Whitman, PT Barnum--and there may even be a dash of Huck Finn and Fielding's Tom Jones mixed in there somewhere. If you stop and think about it, isn't it amazing what people can and do believe? People worship everything from stone gods to trees and rocks to Elvis Presley and space aliens, and they've always had "guides" such as priests and ministers to lead the way. The Bebb stories encourage us to question what we believe, who we believe in, and how we can possibly put our faith in anyone or anything these days----when we're faced every day with further evidence that people and their feet of clay generally stink. These stories were written in the 1970s, and in many ways they look forward to the media-exploded days of the 1980s and 1990s, when tv programs and internet content virtually replaced the "landscape" of daily life in middle-America. Leo Bebb is essentially a charismatic, Bible-thumping evangelist from the 1940s wandering in the wilderness of late 20th-Century America. He reminds me of those ubiquitous radio preachers on AM radio coming out of Lubbock, Texas, or somewhere down south, imploring all within the reach of their syrupy drawls to accept the love of Jesus--and to send down the cold hard cash. Although there was something creepy and unsettling about those messages, there was also some strange comfort in knowing that somebody out there still found a reason to believe. I first read these four Bebb novels in 1991, and upon re-reading them in 2003 it strikes once again me that Buechner's stories and characters are timeless. More so now than in 1991, I think these are American stories about American characters who are trying to "get ahead" in a big country filled with a roughly mixed cocktail of races, cultures, traditions, and values. They're all busy with the business of life, but they're looking for something to believe in, even in such a crazy place as modern America. Every one of Buechner's characters seems to have one foot planted on the ground and one foot stepping tentatively toward the gates of heaven.

eternity in a grain of american sand

Published by Thriftbooks.com User , 19 years ago
This is a find. Buechner is a fine writer with impeccable ears; but his special quality is a kind of humanity that gives merit to the meritless, rejoicing as he has us shake our head, chuckling at their goings-on. His religion is germane, and if this matter is quite different from G.K.Chesterton's, and his voice and ego less resonant, nevertheless there's an assurance here that reminds one of the latter. Fine work, and it's a heathen here that says so.

Published by Thriftbooks.com User , 21 years ago
A novel that is by turns heart breaking and comic. The writing is always clear and crisp. I first read this book 15 years ago and have reread it periodically. The novel centers on the relationship between a man struggling with the illness of a family member and a flim-flam minister who just may be an alien. It sounds corny but the writing is just so lovely that it all works. I find this book to be reminder of the beauty and pain in our daily lives and our search for some form of meaning and peace.

Published by Thriftbooks.com User , 21 years ago
This collections of stories about Leo Bebb, is an interesting vignette of life. Whilst Bebb swings from villan, to conn man, to careing pastor, the author is really showing how we all have good, bad and ugly in us and God's grace is active in our lives despite this.The stories are wiritten in a earthy and human way. They will make one laugh, cry and be disgusted at the characters. If one holds a curious facination for human life, in particular in the 1950's - 1960's then this book is for them.A truly good read.

The Wonderful World of Bebb

Published by Thriftbooks.com User , 21 years ago
For a priest to say one of the greatest sources of inspration is the fictional operator of a phony diploma mill might seem strange. But rarely have I found such lucid inspiration, deftly drawn characters and outrageous comedy as Frederick Buechner provides in this four novel series compiled here as the Book of Bebb. Buechner is a writer of rare beauty aqnd range. He soars poetically and dirties his hands scatalogically. He creatres a strange world, yet makes it utterly believable as it resonates with the human spirit. A relief from such popular religious fiction as the sacharine Joshua series, Buechner speaks of the sacred and the profane in a way any spiritual quester will recognize and appreciate. Bebb and his friends willl find a place to ocupy in your imaginations forever.
Copyright © 2020 Thriftbooks.com Terms of Use | Privacy Policy | Do Not Sell My Personal Information | Accessibility Statement
ThriftBooks® and the ThriftBooks® logo are registered trademarks of Thrift Books Global, LLC