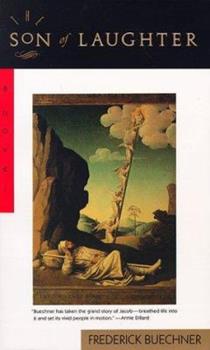 The Son of Laughter

Rich in family drama, passion, and human affinity, critically acclaimed author Frederick Buechner's contemporary retelling of this captivating and timeless biblical saga revitalizes the ancient story of Jacob, delighted our senses and modern sensibilities and gracing us with his exceptional eloquence and wit.

The Son of Laughter Frederick Buechner

Published by Patricia Baker , 3 months ago
This Novel I use all the time. It breaks down every character in parts. To call God the Fear struck as most interesting. I must say the reading is great and shows how we Fear God but seldom listen.

Published by Thriftbooks.com User , 19 years ago
Frederick Buechner's training and experience as an ordained Presbyterian minister, combined with his incredible literary skills make reading his works a pure joy. His retelling here of the story of Jacob, son of Isaac (whose name means Laughter), brings to life like no other author I've read the struggle toward God, the intra-family strife, and the sheer battle to stay alive in harsh times and an unforgiving landscape.Jacob was not a perfect man -- but his yearning toward God was earnest and all-consuming, at the very core of his being. Buechner shines the light of his talent on Jacob's life, on the right and wrong decisions and actions, on the joy and sorrow, on the good times and the difficult -- and he does so with a loving hand, making no judgements, illuminating the whole and allowing the reader a multitude of aspects upon which to meditate and ponder, drawing parallels to our own lives and times as we do so.The novel depicts a time during which people struggled within themselves -- and with their traditions -- to make the transition from worshipping many gods to worshipping one, and that transition was not an easy one. We can see the same struggle going on within our world today -- if we blur and expand the meaning of the word 'worship', we can see too many things that we value and allow to control our lives that should be peripheral to our journey, such as money, power, & c. Early in the book, Jacob makes reference to this transition (from p. 7), speaking of the 'old gods': 'When I say that I have forgotten their names, I mean that I cannot remember their names without trying. Maybe they also remember me. Who knows about gods? Maybe they have seen every step I have taken ever since. Maybe they are still waiting for me to capp once again on their queer and terrible names.'The question of the Name of God is addressed in several places in this wonderful novel. He is referred to as 'The Fear', as 'The Sheild' -- but not given a name in the true sense of the word. He is never referred to as 'Elohim' or 'Jehovah'. On p. 161, during a physical struggle with God on the bank of the river Jabbok, God gives Jacob a new name: '"(Your name) is Jacob no longer...Now you are Israel. You have wrestled with God and with men. You have prevailed. That is the meaning of the name Israel" I was no longer Jacob. I was no longer myself. Israel was who I was.' The question of the Name of God is burning within Jacob's soul. From the same passage: 'He was too close to me to see. I could only see the curve of his shoulders above me. I saw the first glimmer of dawn on his shoulders like a wound. I said, "What is your name?" I could only whisper it. (God replies:) "Why do you ask my name?" We were both whispering. He did not wait for my answer. He blessed me as I had asked him.'On p. 184, Jacob experiences a bit of an epiphany on this subject: '(God) refused me his when I asked it, and a god named is a god summoned. The Fear comes wh

Published by Thriftbooks.com User , 19 years ago
Jacob, to be truthful, had never really spoken to me before this novel. This hauntingly beautiful retelling seeks to explain why he acted the way he did without whitewashing him.The well known stories of his relationships with his parents and twin brother Esau are here, as well as his two wives and sons and the famous ladder dream and wrestling match with the angel. Jacob is no saint (for instance, the fact that he barely sees Bilhah and Zilpah as people when he thinks of them at all subtly brings the point home of what being a slaveowner really means), but he has spoken to Mr. Buechner through the ages about why he was justified in doing what he did to Esau and preferred Joseph to such an extent over his other sons (Joseph, incidentally, is the most loveable character in the book, finally breaking the cycle of pain as the embodiment of the reconciliation of Jacob's mind to Esau's heart, and Jacob's retelling of Joseph's story - presumably from what his son told him after their reunion - is beautiful and one of the highlights of the novel). Through his life there is only one constant - God - and their relationship reminds us how frightening the Lord must have seemed at times to the patriarchs and matriarchs long before the Good News.Buechner's voice for Jacob is utterly compelling, and the novel is biblically sound with one major exception. Like many before him and doubtless many who will follow, he doesn't deal with the thorny Biblical fact that Dinah was raped and Jacob wasn't all that concerned about it (the issue is skirted by theorizing that Jacob knew Dinah loved Sheckem and what happened between them was consentual).This will eventually become a classic. Please note that at times it is rather sexually explicit - definitely an R rating.

Published by Thriftbooks.com User , 21 years ago
Buechner captures both the human and the divine once again as he traces the life of Jacob, the son of Laughter (Isaac). While the biblical events of Jacob's life are present, Buechner fills in the biblical gaps with emotive images, powerful reflections, and realistic human commentary. Buechner simultaneously captures the human tendeny towards sin, and hope in a God who is not content to strand us in our wretchedness. He does so through the story of Jacob, which is really a story about the grace of God in one man's life; a grace we all can share in. This gritty story shows Buechner's ability to embrace one of Christianity's greatest paradoxes; that of a gracious and holy God who reaches into the lives and hearts of sinful man. The story remains true to the essence of Jacob's story in Genesis, but adds a gritty humanity to the gaps inbetween. I recommend this book to anyone who wrestles with sin and grace as I do.

The Biography of Jacob Brought Powerfully to Life!

Published by Thriftbooks.com User , 21 years ago
This biography of Jacob walks a fine line between Biblical correctness and speculation. Buechner never adds data in conflict with the Bible, but certainly the character traits, motivations, and numerous small details that bring the story to life are certainly speculative. Such as I know of it, Buechner appears to have borrowed from rabbinical traditions to fill in some of the gaps in the story. (For example, just how did Sarah feel when Abraham and Isaac came back and told her that her husband had tried to sacrifice her son?) The result nevertheless is a gripping story that will forever color how I read Genesis 12-50. Buechner has such a commanding way with words I almost believe that his books need to be read aloud. The images are so rich, the words are so carefully chosen, it is almost poetry. Warning: Genesis is a PG-13 or R rated story, and Buechner's portrayal of some of the characters may offend some church people. I'd love to give the book to my pastor, for example, because of the richness of potential sermon illustrations, and I'd love to do a book study on this book in a Sunday School class, but in both cases, I think that Buechner gives just a bit too many of the seamy details for it to find its way into my church. (In short, if you like the Bible and you like R-rated movies, get this book! If you like the Bible but you think PG-13 movies are the work of Satan, then you probably won't like parts of this book much.)

Published by Thriftbooks.com User , 23 years ago
This novel, my first Buechner book, has sent me in wild pursuit of his other writings. I have never read such imaginative, lush prose outside of the works of Umberto Eco. Buechner takes the biblical story of Jacob and literally brings it to life in this wandering, seductive tale of faith, deception and the indiscernable ways of the God of Abraham, Isaac and Jacob. Highly recommended.
Copyright © 2020 Thriftbooks.com Terms of Use | Privacy Policy | Do Not Sell My Personal Information | Accessibility Statement
ThriftBooks® and the ThriftBooks® logo are registered trademarks of Thrift Books Global, LLC