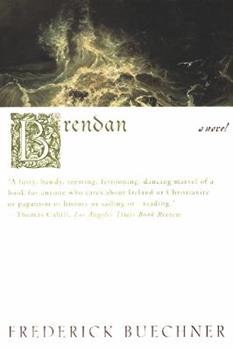 An acclaimed author interweaves history and legend to re-create the life of a complex man of faith fifteen hundred years ago. Winner of the 1987 Christianity and Literature Book Award for Belles-Lettres.

Published by Thriftbooks.com User , 13 years ago
This book was highly enjoyable. I am a fan of fantasy/fiction, and was pleased with the writing style, dialogue and mythic quality that Mr. Buechner brought to this historic figure. I am looking forward to hunting down more of Mr. Buechners fiction.

Published by Thriftbooks.com User , 18 years ago
The overviews represented above are fantastic, well-written and thorough. I enjoyed this book about St. Brendan despite the choice of narrator. I liked Buechner's evocation of the humanness of Brendan through the eyes of Finn, his loyal friend and companion. However, what I did not care for is the curiously flat quality of the book: a complete lack of understanding on Finn's part about spirituality and mysticism. Perhaps this is where I am coming from (as one who likes mysticism) but I'd have been much more excited to see a book written from a mystic's point of view, with a mystical evocation and understanding of the world. Finn's point of view is unfailingly, extremely physical, and any thoughts about the spiritual world are tentative at best. The character of Finn struck me as spiritually childlike; this is not a criticism, just an observation. In many ways, Finn is the perfect companion for Brendan, because he is low-maintenance, curious but not nosy, and he has a rather live-and-let-live attitude, which Brendan being Brendan needs. The writing in Mr. Buechner's book is first rate and the tie-ins with Gildas, Arthur, and Brigit were amazing, even if they were seen from such a prosaic everyman.

ANOTHER GEM FROM FREDERICK BUECHNER

Published by Thriftbooks.com User , 19 years ago
This is the third of Buechner's works I have read, and I have loved and devoured them all. The author takes us breathtakingly into the life and times of Brendan, a 6th century Irish saint -- Brendan the Navigator, as he is known by many. The language, imagery and power of this novel is astonishing.Brendan's story is related here by his long-time friend and travelling companion Finn -- excepting for a section of the book that deals with Brendan's first voyage, from whom Finn is excluded by the mishap of falling overboard as the ship leaves Ireland. This part of the story is related through Brendan's written accounts of that time.Taken from his parents soon after he was born by Bishop Erc, a relation, and placed into the hands of the Abbess Ita for the purposes of his education and upbringing, Brendan seems destined for a rich spiritual life from an early age. Forever seeking to grow closer to God, he takes as a quest the search for the earthly Paradise -- Tir na nOg (The land of the Young) of Irish legend. He makes two sea voyages in search of this blessed land -- his adventures are many, as are the epiphanies experienced by him along the way. On his second voyage, legend has it that he may have reached as far west as Florida -- predating even Lief Ericsson's discovery of America by 400 years or so.Brendan's spiritual struggles are even more arduous than his seafaring ones. An earth-bound human being, he is frought with contradictions -- as are we all -- and his battle to rationalize them with his deep-seeded faith is not one without its casualties, both within him and among his earthly companions. He is wracked by guilt and sorrow as a result of the choices he makes in his life -- and his search for meaning, and for ways to serve God, continue until his death. On page 216-17 of the novel he comes to a seemingly simple thought -- but one that is deceiving in its simplicity, an all-encompassing flame burning at the spiritual heart of our life's purpose. He is in a conversation with a Welsh monk who is obsessed with transcribing the sins of the world to paper. Gildas, the monk, says 'When the Day of Judging comes, there'll be so many sinners running about some may escape the flames altogether. My work is to set their names down here with all their sins written after them so the angels don't let a single solitary one slip through their fingers.' Brendan is saddened by this focus on man's evil -- his work, as he sees it, is more to help the poor folk, to offer aid and succor where he can. The following portions of his conversation with Gildas is moving and poignant: '(God) wants each of us to have a loving heart. When all's said and done, perhaps that's the length and breadth of it...To lend each other a hand when we're falling. Perhaps that's the only work that matters in the end.'Brendan passes through -- and witnesses -- much suffering, as well as joy, in his life. He has come to be honored and revered as a saint for the works he

Published by Thriftbooks.com User , 21 years ago
Brendan is the story of a sixth-century Irish monk's quest for "the land of the blessed" the terrestrial Paradise known in Celtic lore as "Tir-na-n-og". Buechner skillfully takes us to the doorstep of many rich and vibrant lands via Brendan's journeys... and lets us meet with a many-splendored cast of characters, none of which are superfluous. All of these places, and all of the characters play a vital role in both the building up and the tearing down of Brendan. Aside from the sheer beauty of this story, laced as it is with Buechner's unrivalled metaphors (all writers bow)... I feel there are many lessons in the book that further commend it to the realm of worthy reading.It is a book which in the end asks us to come to terms with our own questions we would address to God. Whatever they may be. In the process, we may find that many of those questions have already been answered. Others (perhaps the greater part) never will be. This is normal. Life is mystery. From the book I think I've learned that our inner search for God can be as much selfishness and pride if it does not work itself out in a love for others and a willingness to extend our "selves" for the purpose of nurturing enlightenment in others.For Brendan, this is a lesson learned in retrospect. And for all of us, I think there is an implication here that theoretical and practical spiritual truth is the fruit of a journey. Bitter if plucked too early; sweet if dropped when ripe. Towards the end of his life Brendan says (refering to God) "Perhaps we've given all but what he truly wants." And further "He wants us each one to have a loving heart."It seems that after a life of privation, striving, abstinence, and self-inflicted penance, Brendan finds his greatest spiritual fulfillment comes through his simple practical interactions with common folk (regenerate and unregenerate). The narrator Finn tells us, "Every day and every weather he'd go tramping off in search of them he thought needed succor most." And further, "Then the same Brendan that once was wont to blather for hours on end of the wonders he'd seen would for a wonder sit silent as a stick while some poor soul spun out his own drab story."At any rate, through Brendan's life we are afforded a glimpse of the truth that it is not primarily through our good works that we attain peace or favor with ouselves or with God. The life-long friend and narrator, Finn, concludes by saying that if he were Brendan's ultimate judge, "I'd sentence him to have mercy on himself. I'd sentence him less to strive for the glory of God than just to let it swell his sails if it can." Brendan is the story of a cold soul's migration to warmer climes. And back again. The confusion of the religious genius.If I were some sort of ultimate judge, I'd sentence everyone to a reading of Buechner's book.

Published by Thriftbooks.com User , 23 years ago
Brendan,represents the best view of mystical Irish christianity I have ever read.It is a book to be felt through the soul and the senses,if you want to know the celtic spirit and it's special relationship to god.Brendan himself is a product of both a pagan heritage and a christian calling,he blends in his preachings a love of rich celtic myth and pride of place, with the mytics empathic love of god.This book is a celebration of life,for anyone who believes religion should be life affirming,loves the celtic spirit and sees earth as a gift of gods creative powers;to be celebrated,cherished,and cared for. .
Copyright © 2020 Thriftbooks.com Terms of Use | Privacy Policy | Do Not Sell My Personal Information | Accessibility Statement
ThriftBooks® and the ThriftBooks® logo are registered trademarks of Thrift Books Global, LLC