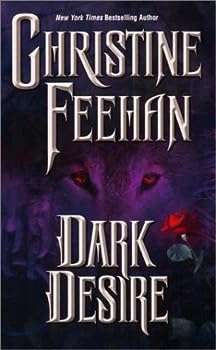 Terrific 2nd Novel In The Carpathian Series - A Must Read!

Published by Thriftbooks.com User , 17 years ago
"Dark Desire" is the second book in Christine Feehan's Carpathian series. This novel stands alone and it is not necessary to read the first book to appreciate this one - although I think you will enjoy it more if you do. Carpathians are a unique race of beings, originating in Romania's Carpathian Mountains, who have existed since humans first inhabited the earth. They are definitely not vampires. They are, however, a different race than man, gifted with the ability to change shape, fly, and move faster than the eye can see - and also able to communicate through both telepathy and language. Acquiring sustenance from human and/or animal blood, they do not kill or turn people into vampires. Carpathians mate for life but since the females rarely live to adulthood, and their childrens' mortality rate is high, not many males are able to find a female suitable for a lifemate....or any female at all. The women provide the light to the males' darker side. After 200 years, the Carpathian male loses all human feelings, unless he has a mate. The race is dying out and many males, having lived for centuries without wives, often choose to end their existence or turn rogue, (vampire), in despair. Jacques Dubrinsky, a brooding and once powerful Carpathian, was betrayed to vampire hunters who tortured and imprisoned him in chains where he has remained for seven years. His memory gone, Jacques' shattered mind reaches out in agony and finally manages to establish a connection with dedicated American surgeon Shea O'Halloran. His voice haunts her dreams and finally she feels compelled to find his place of imprisonment and try to save his life. Her compassion, courage and ability to love will return Jacques to sanity and restore his memory if anything or anyone is able. Shea has a rare blood disease and needs constant blood transfusions to remain alive. Shea does find Jacques but they are both in terrible danger. They must deal with Jacques' past and also Shea's - which is much more unusual than she knows. Also, the evil men, and vampire, who originally tried to take Jacques' life are hot on their trail, as are his Carpathian family. They believed he was dead and now want to help both Jacque and Shea. This is an extremely exciting and imaginative novel. The romance is sensual and scorchingly hot, but violent at times - remember, Jacques is not quite sane at first - also the descriptions of his torture are graphic. Ms. Feehan brings back characters from her first Carpathian novel and introduces others. These creatures, (beings?), are wonderful - certainly enough so that most women would offer up their necks without a qualm. Highly recommended. I can't wait to read the next Carpathian novel. JANA

Published by Thriftbooks.com User , 21 years ago
There are not many authors whose subsequent books are as good as the first. This author does it hands down in Dark Desire. The sexual tension is descriptive and riveting and the portrayal of a male who will always love you and put you first is impossible to resist. I liked it that the personalities of Jacques and Shea are totally different, as well as their emotional needs are different than those characters of Dark Prince. There was enough to tie in the previous book and keep the story flowing, as well as information to lead to new books. It was exciting to see Jacques as more animalistic and almost out of control and Shea act as his anchor; how as his lifemate, even when his emotions were off the deep end from his torture, he still couldn't hurt her and recognized her as his lifemate even when he wasn't all there. I am looking forward to the stories of Byron and more so of Gregori. I can't wait to get more books by this author.

Published by Thriftbooks.com User , 21 years ago
Whew! I must say that after reading Dark Prince, I could not wait for the next installment of intense passion. Even though I was--and still am--anxiously awaiting Gregori's story, I do not regret reading Jacques and Shea's story. Among other things, I appreciated the way Ms. Feehan set up the beginnings of the relation between Gregori and his future bride.In Dark Desire, Mikhail's brother Jacques is teetering on the brink of insanity after suffering innumerable wounds, being left for dead, and buried for years. He establishes a telepathic connection with Shea, a human American doctor. Shea doesn't know why she is being followed by mysterious men, but she hears Jacques' call and eventually goes in search of him. She finds this animalistic, riveting "man" and gets him on the way to recovery, but slowly realizes that her relationship with him is getting weirder by the minute. Together, Jacques and Shea must deal with his tenuous grip on reality, her acceptance of Carpathians, their intensely passionate bond, and being hunted by vampire killers.I loved both leading characters. Shea's scientific outlook makes it believable that she wouldn't totally lose her mind when confronted with the differences between Carpathians and humans, and that she could accept the existence of an entirely new species. The idea that Jacques is so detached from everything around him that Shea is his only reality, and only interest, was immensely seductive to me. His need for her is mental as well as physical, and he has the possessiveness of a caveman. His reactions and motivations are purely primal, which again I found incredibly appealing. With the Carpathians series, Ms Feehan does a wonderful job of re-introducing readers to the basic, instinctive rapport between male and female. Sensual heat radiates from every chapter, and leaves one lying in bed at night hungering for more.

Published by Thriftbooks.com User , 21 years ago
My sister introduced me to the first book in the series, Dark Prince. I was the one to find Dark Desire on the shelves, and I bought two copies and rushed directly to my sister's house to give her one of them.Jacques is a man teetering on the brink of insanity after years of torment. Shea is a brilliant surgeon with an endless supply of compassion and a lifetime of loneliness, struggling to find the cure for a blood disorder that will eventually claim her life. She is the one person who can keep him from madness, the other half of his soul. He is the one person who can end her loneliness and provide her the unswerving, unconditional love she both needs and fears.Christine Feehan has created a fascinating world, filled with drama, passion, and characters that grab your interest and hang on. The Carpathian life mate bond is an intense merging of souls, wonderfully depicted by Ms. Feehan's talented pen. What woman could resist the idea of a gorgeous man who will love her unconditionally, for all eternity, putting her life and happiness before his own?Whether you're a fan of vampire romance or not, this series is not to be missed for romance readers who love intense, passionate, emotional reads. I can't wait for the next installment.Good job, Ms. Feehan!

Wonderful! A must read!

Published by Thriftbooks.com User , 22 years ago
Fighting to survive unendurable torment, Jacques Dubrinsky's shattered mind manages to establish a connection with a stranger. A woman who might be able to save him, or who may be the cause of his agony. American surgeon Shea O'Halloran feels compelled to travel the thousands of miles to the Carpathian mountains, where she discovers a being like none she has ever known. In her desperate race to save Jacques, Shea must face the truth about what he is and about herself. Christine Feehan has given us another can't- put- it -down page turner with Dark Desire, the second book in her series about a race of people who face extinction and are hunted as vampires. I was pulled deep into the emotional impact of Jacques' destructive madness from page one. The relationship between Jacques and Shea reminded me of the Beauty and the Beast story. He desperately needs her but at the same time is dangerous to her, and she is drawn to him in spite of the fact that she knows it may lead to her destruction. Not for the faint of heart, this book does contain some graphic violence and some pretty hot romance. A very well written, entertaining story that I highly recommend.
Copyright © 2020 Thriftbooks.com Terms of Use | Privacy Policy | Do Not Sell My Personal Information | Accessibility Statement
ThriftBooks® and the ThriftBooks® logo are registered trademarks of Thrift Books Global, LLC