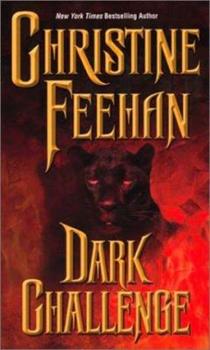 A wild and passionate love affair brings our hero and heroine together. Neither can resist the attraction they feel for one another and everything else takes second place.

Another great read from Christine Feehan!

Published by Thriftbooks.com User , 21 years ago
Dark Challenge proves to be just as engrossing as Ms. Feehan's previous books in the Dark series. Dark Challenge is the story of Julian (twin brother to Aidan, hero in Dark Gold) and Desari (part of a lost group of Carpathians and sister to Gregori, the hero in Dark Magic). This book sets itself apart from the rest of the series by pairing the hero with an ancient Carpathian female. Up until now we had been dealing with human females converted into Carpathians, or very young Carpathian females mated to ancient males. In book we learn that the females have their own unique gifts and are just as powerful as their male counterparts. The love story between Julian and Desari is a delight to read. Julian, like all male Carpathians is arrogant, and over protective, but he finally meets his match in Desari, a woman just as powerful as he is. Seeing a Carpathian male trying to figure out how to deal with a mate who is his equal will have you laughing out loud several times. Ms. Feehan also introduces us to several intriguing characters who will have her fans clamoring for their stories to be told. I look forward to reading more from this author. Also recommend, Dark Prince, Dark Desire, Dark Gold, and Dark Magic.

Dark Challenge is a WINNER

Published by Thriftbooks.com User , 21 years ago
Christine Feehan's newest book, DARK CHALLENGE, is a fabulous addition to the DARK series. Each book has a different feel to it and keeps me enthralled from beginning to end! It just keeps getting better and better! If you haven't read any of these books, start with Dark Prince and work your way up - you won't be disappointed.Julian Savage is powerful hunter for his people, the Carpathians. He expertly hunts vampires, the undead, who torture and kill his people as well as humans. He has had to live a solitary life, sometimes even hunting down old friends who turned vampire. But he does his duty, without fail. Separated from family, totally alone, he finally finds his lifemate. Their new relationship is only part of the story - someone is out to hunt down Desari and Julian must protect her at all costs while dealing with her family and an enemy from his troublesome past.The characters in Dark Challenge are fresh and the story takes a twist that leaves the door open for so many more possibilities! A roller coaster ride of emotions, this book had me laughing out loud at the lively banter and interaction between the characters. The family unit is very tight-knit and the heroine's brother, Darius, is awesome! I can see the legion of readers who will be begging for his story just like they did for Gregori! The sizzling romance had my toes curling and the emotional intensity touched me to tears. If you want to read a hot love story, this is the book for you! Julian and Desari are electric! I felt as if I was right there in the middle of all the action. One thing about these books is the respect the characters have for the earth, the animals, the elements. An appreciation that is beautiful to watch. The secondary story is very intriguing as well and I'm hoping we see more with the other family members in upcoming books.It is a story about light balancing out the dark. A story about love, peace, renewal and forgiveness. A story about learning, trusting, sacrifice and honor, not only for your mate, but for your family. In Julian and Desari we see a love that shines from their souls, a timeless touch of perfection, a joyful sharing of self. If I had to make a complaint about this book - it is only that it ended too soon!

Published by Thriftbooks.com User , 21 years ago
Somehow I stumbled onto the Dark series. I'm an old "Dark Shadows" fan (the original series), so I lean towards the supernatural genre anyway. I've read all of the books in the Dark series and enjoyed every one. It was easy to follow the story line, even reading them out of order as I did. I feel "Dark Challenge" is the best of the series (although the other 4 books are very good, too), probably because Desari is such a strong character, certainly able to deal with Julian's "cave man" tactics. Christine Feehan introduces four additional characters with Darius, Barack, Dayan, and Syndil, as well as mentions more about Lucien and Gabriel. Surely such fodder won't go to waste! I eagerly anticipate several sequels to this wonderful line of Carpathian romances.

Published by Thriftbooks.com User , 21 years ago
The fifth in the ongoing original saga of the Carpathians, this one introduces us to four new characters as well as the twin, Julian, of the 'hero' in Dark Gold. It also introduces Desari (Dara) a Carpathian Female who is equal in power to Julian, which makes for an interesting situation as none of the Carpathian males (except those in Desari's 'family unit') are used to dealing with Carpathian women who are the equal of their power. It also brings a unique twist into the mix as the two carpathian females introduced to us, each have a unique power that the Carpathian males were unaware that Carpathian women of power have.This book, I felt, had a deeper depth to it than the last four. It really showed how hard it was for Carpathian males to live together, and showed a deep interaction between the "family unit" of Desari (including a sweet sister relationship between Desari and Syndil, the other female Carpathian). All of the characters were delightfully interesting, and the situation between Julian and the other male Carpathians, especially between Darius and Julian, was quite amusing and real.This book also sets the stage for more books, introducing the reader to many interesting Carpathians, that I hope will all be seen in their own future books (Especially Darius--I think he will quickly score as high a following as Gregori, if not a higher following. Up until now, I actually liked Jacques the most, but now Darius has quickly tied with him.) Spoiler here, but it also hints big time that we will be seeing more about the legendary warrior twins, Gabriel and Lucian. I cannot wait to read their story. The story Christine gave in the book set up quite a stage for their stories, and so far Christine has proven that her sequels can stand on their own two feet and do not fall in the trap of most sequels of wearing out the same plot over and over.I could not put this one down, even though I had to get up at four the next morning for work. I would definitely recommend this book, and it is another that is going on my keeper shelf.

Published by Thriftbooks.com User , 21 years ago
This book was absolutley wonderful.Julian meets his lifemate,who is part of a lost group of Carpaithian,two of which are Gregori's brother and sister.The sister is Julian's lifemate.Desari is an ancient Carpaithian with gifts. We haven't seen the power of the woman until you have read this book. When Julian finds this group he gives the men hope because they did not Know about lifemates and that their was a posibillity of once more feeling again.Darius is Desari's brother, who is very protective and really does not like that Julian has bound his sister to him when Julian still has to face the vampire that maked him when he was young. There are undercurents between the other female in the group and one of the other men. I think they are lifemates but don't know it. A great book to read hope you enjoy it too. I hope to see more of the character's from this book in future books,especialy Darius.
Copyright © 2020 Thriftbooks.com Terms of Use | Privacy Policy | Do Not Sell My Personal Information | Accessibility Statement
ThriftBooks® and the ThriftBooks® logo are registered trademarks of Thrift Books Global, LLC