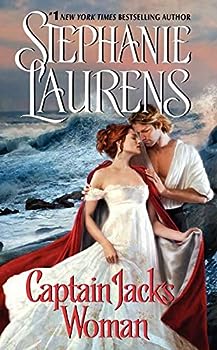 (Part of the Bastion Club Series)

They meet in a clash of swords, drenched in the moonlight of Britain's rugged eastern coast: Captain Jack, his handsome features etched in silver and shadow, his powerful physique compelling "Kit"... This description may be from another edition of this product.

Best of Her Books By Far

Published by Thriftbooks.com User , 15 years ago
I admit I've been disappointed in the last few of Ms. Laurens books I read, but I was pleasantly surprised to find this story so out of her usual story line. Kit is a high spirited young lady who resolves not to marry convinced she'll never find love. The ladies in her small home town plot to get her involved with Lord Hendon the area's most eligible bachelor and newly returned war hero. Kit is bored with the slow life and starts taking moonlight rides on her horse Delia dressed as a lad. She stumbles over a small smuggling gang and leads them out of danger when the watch almost catches them. She finds herself surprised when they make her or "the lad Kit" the leader of their gang. Soon a much larger gang takes over and she finds herself falling for their handsome leader Capt. Jack. Capt. Jack is really the pseudonym of Lord Hendon who is working undercover for the government to bust the real leaders behind a gang who is smuggling in spies from France. When his gang takes over the smaller gang, he almost immediately figures out Kit is a woman and falls for her, vowing to make her his mistress. He believes she is the illegitimate daughter of one of the local gentry and seduces her. When he finds out who she really is he vows to make her his wife. He doesn't however tell her the truth about who is he is really working for and she is worried when the gang starts bringing in spies. What is so great about this story is they take two characters who are head strong, but allow them to show their softer sides without ever appearing weak. Kit is the headstrong granddaughter who gets involved where she shouldn't, but she never comes across as spoiled or unlikable. Actually for once, the heroine is the perfect blend of sassy and smart and actually has some common sense. She is one of the best heroines in any book I've read yet. Jack is the man we all dream of having, he gets you all bothered just looking at you. He respects Kit more than most heroes in the regency books but sometimes still falls into that I'm the man , you're the woman trap. His strength is he does recognize that he and Kit are equals. If Ms Lauren had all books this refreshing , with original characters she'd never leave the best selling list.

Published by Thriftbooks.com User , 17 years ago
I kept feeling it just gets better! Never boring. Not many scenes on board ship. They mostly stick to land. He's a spy posing as a smuggler -- she is smuggling - in breeches/disguise. Lots of excitement. Funny. Sexy. Kit tortures the Captain with her curiosity. He doesn't guess she's an innocent legit lady. A+ for sexual tension. It's my favorite by this author, though it's not said to be her best. This is kinda the beginning of the Bastion Series; but before the 'club' was created. We meet Tony from "Gentleman's Honor."

Published by Thriftbooks.com User , 20 years ago
I've read most of Stephnie Laurens work and it's still a toss-up to me as to which hero is the sexiest. Up til now, it was Sebastian in the Devil's Bride (Bar Cynster series), but Captain Jack (aka Lord Hendon) takes my breath away. On a scale of 1-10 for sensuality this is definitely a 10!Sensuality aside, I really liked the story! Lady Kit is fresh and alive. On a midnight ride,dressed as a lad, aboard her fabulous Arabian mare Delia, she inadvertently saves a small smugglers gang from being caught by the revenue men and becomes their leader, unbeknownest to them that she is a woman! After a few well devised and successful smuggling ventures, she runs into Captain Jack and becomes engaged with him in, of all things, a sword fight! Still disguised as a lad, Captain Jack is wondering why the slight lad is giving him uneasy thoughts.Well, and so it goes. The story is really quite good. Quite a lot of interaction (sex) between the two main characters, once Captain Jack figures out who Young Kit is. I love the strength and arrogance of Captain Jack, who really has a way of taming the beautiful, wild and passionate Lady Kit - very steamy sex scenes. If this was Ms. Laurens debut novel, it is no wonder she went on to such great success with her later entries! A definite keeper and one to be re-read and savoured again, and again.

Published by Thriftbooks.com User , 21 years ago
I really wanted to like this book. I've read several of Ms. Laurens Regency novels and thoroughly enjoyed them; this, however, is a much larger book -- both in size and scope. Then I got into it, and I thought, Oh, no! Not another spunky, young, heroine who brings the mature hero to his knees, because she knows better about everything than he does.Oh, no! 'Tis not that way at all. This is a wonderful, swashbuckling period piece for (dare I say it?) intelligent readers of whichever sex who should happen to pick it up. It's quite true that Kit Cranmer is indeed a spunky heroine, but not so terribly young -- early to mid-twenties. And Captain Jack, now Lord Hendon, is indeed a mature hero, who brings Errol Flynn to mind in the blink of an eyelash. Kit has come back from an unhappy stay in London to stay with her grandfather, and promptly wanders her way into a smuggling den based on the coast facing France. The captain, home from the wars, is enlisted in a war against the smuggling of spies, but of course, first he must discern those smugglers from the ordinary contraband variety. Lots of laughs jump right off the pages of this delightful book, right along with sexual tension that is believable, for a pleasant change. And LOTS of it, plus the real thing. This is a very sexy book! Ms. Laurens deserves all the accolades she's accrued for this wonderful book, and I'll be part of the long line-up anxiously waiting for her next one.

Published by Thriftbooks.com User , 24 years ago
I really enjoyed this well written fast paced book. I thought all the characters in this story interesting, not just the lovers Jack and Kit. I also got the impression that these two adventurous souls were meant to be together. They were going to meet and marry it was only a question of when. It just so happens they meet with blades drawn. It's wonderful romp, this book is a definite keeper. After my 25 years of romance reading Stephanie Laurens is a wonderful new voice.
Trustpilot
Copyright © 2022 Thriftbooks.com Terms of Use | Privacy Policy | Do Not Sell My Personal Information | Accessibility Statement
ThriftBooks® and the ThriftBooks® logo are registered trademarks of Thrift Books Global, LLC