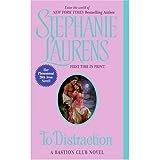 (Book #5 in the Bastion Club Series)

This description may be from another edition of this product. The gentlemen of the Bastion Club have proven their courage while fighting England's enemies, but nothing has prepared them for dealing with that most formidable of challenges: the opposite sex....

Published by Thriftbooks.com User , 14 years ago
I was searching for something to read and even if I Stephanie Laurens is not my favorite author I picked up this title and wow, I'm so happy I discovered this book!! This is a really great story, I don't know if my feeling come from the fact that this is my first complete Stephanie Laurens book, since I have read only some of her short stories but I truly enjoyed the characters, the interaction and the complete plot of this novel. If you are looking for something fun, romantic, sexy and mysterious you have found the right book, I can't wait to get my hands in the rest of the Bastion Series. Be well and take care.

Hot romantic erotica with a likable, sexy pair of lovers

Published by Thriftbooks.com User , 14 years ago
I honestly like almost everything Stephanie Laurens has written. Obviously some readers have gotten a wee bit tired of her standard formula, but if you're after hot and sexy historical *escapist* romances, she does a consistently better job than almost every other writer out there. She's writing for a 21st century audience, who likes hunky alpha males and intelligent, spirited heroines who aren't willing to settle for some ordinary, boring gentleman. There's been some surprising grumblings in the reviews here, so please note that the point of these novels is romantic erotica, not historical accuracy. The only historical romance author I've read who has handled realities such as contraception well is Robin Schoen, and her novels are a lot darker. The romance, the overall story and the writing here was good enough that I've read this book twice. Our hero may have initiated their relationship (doh! Isn't that what alpha males are supposed to do?), but, despite her initial reservations, she was a full, willing and intrigued participant, and well able to keep him from riding roughshod over her despite his "possessive, obsessive" tendencies and nearly overwhelming maleness. I also liked that he admired her for what she was doing to rescue women, and that he helped her rather than just take over. Overall, this is an excellent addition to the enjoyable Bastion series - all of which I recommend! And I can't wait to find out what kind of heroine captures the elusive Dalziel - so keep'um coming!

Published by Thriftbooks.com User , 14 years ago
I loved this book. The plot device is a common one: woman doesn't want to marry, man must change her mind. But in this instance Phoebe's desire not to marry was backed up with real evidence that she truly had an interesting, useful life and didn't need a man to fill her time. She had a purpose for going to teas and balls all day and her strength of character was real and vital. I loved her from the first when upon meeting Deverell she towed him around the house party introducing him to every OTHER marriageable female in attendance. Clever, clever girl. But most of all I just loved him! His little fantasy plays were delicious. I would have loved hearing him whisper all that sexy nonsense in my ear! Laurens has something new there, I hope she uses that again in the future. He was definitely a manly man but could also step back and allow Phoebe to lead when appropriate. Yes, What a man! Sigh, sigh, one can dream........

Published by Thriftbooks.com User , 14 years ago
I have to say this new addition to the Bastion Club series is devastatingly incredible. The characters might drive the other to distraction but I can assure you that the book will drive the reader to distraction as well, forgetting to what might be one of the several symptoms

Published by Thriftbooks.com User , 15 years ago
This is a very good story. This story is of a very open minded man and woman working together for a good cause and manage to love each other along the way. Stephanie Laurens captures your interest from the very beginning of this story when the woman doesn't swoon over the man but blink and dismiss him. I found the story was hilarious in some instances especially when she tried her best to get rid of him by openly pawning him off on any other lady. This story was very well written and totally enjoyable. To mix this with intrigue and mystery was a plus in my book. SL has done it again.
Copyright © 2020 Thriftbooks.com Terms of Use | Privacy Policy | Do Not Sell My Personal Information | Accessibility Statement
ThriftBooks® and the ThriftBooks® logo are registered trademarks of Thrift Books Global, LLC