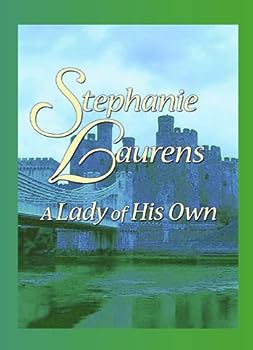 A Lady of His Own (Large Print) (Romances) [Large Print]

(Book #3 in the Bastion Club Series)

This description may be from another edition of this product. The seven members of the Bastion Club have served loyally in the perilous service of the Crown. Now they've banded together to support one another through their most dangerous mission of all: getting...

An unexpected delight. An "A" read.

Published by Thriftbooks.com User , 15 years ago
A Lady of his Own was a welcomed surprise. In recent years, especially with the Cynster series, Stephanie Laurens has fallen into a very predictable rut. While enjoyable, her books had basic carbon copies of characters and plots. Lady, however is a great exception. Main Characters Charles St. Austell, Earl of Lostwithiel and Lady Penelope "Penny" Selborne grew up together and had one intimate encounter 13 years ago. Now back from spending those 13 years as a spy in France, Charles needs a wife. He's bored and put off by all the vapid Misses and their willing subterfuge that he no longer wants any part of. He wants someone who will be a real, loving wife. A partner with a real connection. To his relief Charles has been sent to his home to investigate the possibility that secrets were sold there during the war. Enter Penny. And a mystery. Penny has tried to put Charles behind her. She loved him when she was 16 but was under the hurtful impression that he saw her as just a bit of fun. Of course, that couldn't be further from the truth. In the midst of her turmoil of Charles's return, she is running her own investigation, believing her family to be the ones who sold the secrets to the French. A thoroughly adult and cliché free tale, Laurens brings to life characters and a couple that are completely relatable with out any of the insane runaround and monologue that many other books indulge in. She even avoids the much over played line that 29-year-old Penny might be "incomplete" because she does not have a child. On the contrary, she is happy for her friends with children, but has never felt especially maternal. Penny and Charles know what they want and progress towards it with nary a misstep. Supportive, open, intuitive, and protective of one another they are everything you wish your own relationship could be. The mystery is a good one as well. While the perpetrator is obvious half way through, the exact nature of things is not revealed till the end. The only negatives I can list are a tendency to use modern terms like "cramp his style" and a few many redundant monologues concerning the mystery.

Published by Thriftbooks.com User , 16 years ago
The foremost reason I like this Bastion Club series is that the women are not the "teach me" types of other Laurens' novels. The Bastion Club women are assertive, intelligent women with a great deal of self-determination and lives of their own. No wonder they appeal to the Bastion Club men! I like Penny because she is tall, resolute, and wants equal participation in her relationships. Charles is confident, secure, and wants a partner. Perfect match! Their chemistry is obvious from the start, and the reader doesn't have to wait too long for some sexual sizzle. Oh, yes, Laurens includes a mystery that Charles and Penny solve together but only after a great deal of knife action that threatens everyone.

Her 'most in depth' characters yet, an exhilarating read

Published by Thriftbooks.com User , 16 years ago
Have read most of Stephanie's books. Thought this latest one her best by far. The plot was fascinating & believable, the suspense exhilarating rather than scary, the actions and words of the characters believable and true to their characters. I could put myself in either character and find it exactly as I would have done - and that is a rarity. The wonderful love scenes were honest in their presentation and did not have a lacivious feeling of sex for sex sake. I experienced the heroine's emotions, it was so well done. I could imagine myself in her shoes and wished I could have what she had in the total relationship!!!!It allowed me to fill the hero's shoes with a lost love of my own. It was so well written that when I looked up from reading I had to bring myself back to the reality of where I was and who I am. I was able to completely lose myself - a wonderful way to knock out the worries, constant physical pain, & problems in my own life. 5 stars plus.

Nothing better than a Stephanie Laurens book!!!!

Published by Thriftbooks.com User , 16 years ago
Well over a year ago I began reading historical romance novels and the first I read were Stephanie Laurens. I read every single one she wrote and each one seemed better than the rest! Since then I have been searching for an author I feel is as good as she is - and I am still searching. Yes, there are many great authors but there is just something about Laurens that reaches the very depth of a person. This book embodies that character development. Charles was so dynamic and you just loved to see someone so in control of everything in his life have to thoughtfully, seductively court Penny who 13 years before they had one night of passion. It is always so romantic when the man never forgets a lost love and it was so clear that Charles never forgot Penny. And Penny who is now 29 could never ever forget her first and only true love. It was so obvious how this couple was closer and more connected than most couples in romance novels. That is what I feel Stephanie does better than anyone. All of the passion seems so real - it is intense - it is absolutely beautiful. Someone wrote this book was too long - how anyone could think a Laurens book too long - I could just read on and on and never tire of any of her love stories. I have a special place for all of Laurens books and will be reading this one I am sure again and again. Totally a complete winner!!!

I'll Take Charles...A Man of My Own

Published by Thriftbooks.com User , 17 years ago
Although I've already read close to 200 romance novels this year (historical, medieval, erotic, contemporary, paranormal, etc.), this is the first book I've ever had the guts to write my personal opinion on... Girlfriend (SL) is all that AND the bag of chips! I didn't think she could match the sensuality of "Devil's Bride", but she dun did it again with her seductive exchange of Charles' and Penny's pent up sexual desires for each other, which spans 13 years of abstinence for Penny and maturing into manhood for Charles. Although neither will openly admit loving the other, their individual exploration of each other's passions, expresses their love not just physically, but blissfully includes their hearts and souls. Something the two were too inexperienced to understand 13 years earlier when Penny surrendered her heart and virginity to Charles. Now a grown woman, spinster at 29, and him a bachelor, Earl in need of a wife at 33, Penny offers Charles another personal "invitation"; one in which she never extended to any other man since her first and only time with him. By continuously intensifying each kiss and embrace, they are awakened to each other's sensual growth and ripened maturity that only the nurturing of time and experience could hone; they welcome their differences as man and woman vs the experimenting adolescents of their past relationship. Their new relationship gradually develops, which now transcends the physical plane and drives deeper into their hearts. Penny and Charles are satisfyingly surprised by one another when they recognize their coupling isn't quite the same as they remembered that afternoon they tumbled in the barn when they were youths of 16 and 20 years old. Charles slowly builds his plan of seducing Penny into surrendering her heart to him and becoming his wife. She relinquishes her stubborn attitude of `I am in control and call all the shots of my life' and little by little allows him to be the man in her life; friend, lover and protector. Her fervent moments of passion burst out as he guides her to "heaven" again and again by candle light and moon light; saturate his personal pleasure along slide ensuring hers. SL articulates very well their maturity, as well as the soul satisfying giving and taking of pleasure betwixt the found again lovers. SL had me in Penny's spell when Charles whispered a moan, succumbing to Penny's ravenous hungry eyes and seeking hands, "Whatever you wish, however you wish. I'm yours. Take me." Ohmigod... The `who done it' murder mystery plot of the story will keep your mind contriving trying to out wit the author between the love scenes. Charles and Penny constantly share their ideas and are basically honest with each in their joint efforts to clear her family name and find a brutal murderer and spy. Therefore, leaving little room for blatant deceptions (lies), allows them to `go hand and glove' in impromptu situations they face during their investigations. This is definitely a "deep read"
Copyright © 2020 Thriftbooks.com Terms of Use | Privacy Policy | Do Not Sell My Personal Information | Accessibility Statement
ThriftBooks® and the ThriftBooks® logo are registered trademarks of Thrift Books Global, LLC