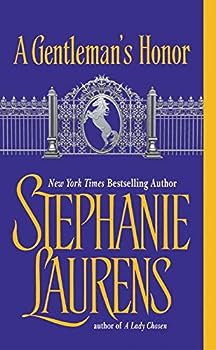 (Book #2 in the Bastion Club Series)

The Season has yet to begin, and the second member of the Bastion Club, tall, handsome Anthony Blake, Viscount Torrington, is already a target for every matchmaking mama in London. None of their... This description may be from another edition of this product.

Published by Thriftbooks.com User , 17 years ago
I have read all Stephanie Laurens' books. Some have been hits, some have been misses. This one is a hit! Book One of this new Bastion Club series was a good story and a good heroine. Book Two combines a great heroine and a sensuality that begins in chapter one and doesn't miss a beat throughout the entire novel. The series revolves around seven English spies, now off-duty, who bond over finding their own wives instead a letting society matrons manipulate their choices. Naturally, each book will be about one of the men, his wife search, and a mystery he solves using his spy skills. It works for me! The only three drawbacks of this novel are characteristic Laurens' style: the "mirror sex," the heroine's "teach me" excuse to have sex, and a mystery that takes a little too long to resolve. With that said, however, the mirror sex in this novel does not seem contrived as in some Laurens' novels, and the heroine's confidence and ability to defend herself against the villian is inspiring. I liked Alicia's spunk, resourcefulness, determination, self-preservation, leadership, and tenderness -- a great character! This book even brings back Jack and Kit from "Captain Jack's Woman" -- a book that causes second-degree hand burns while reading it! Laurens gives "A Gentleman's Honor" the same sizzle treatment...minus "Jack's" table sex!

Published by Thriftbooks.com User , 18 years ago
Ms. Laurens does an awsome job at keeping you reading this book. I couldn't put it down. I enjoyed every plot twist and change. The love scense are great. She keeps you guessing till the very end! I highly recommend this book.

Petty Raunchy for a Regency

Published by Thriftbooks.com User , 18 years ago
The sex is sizzling in this lovely second installment of the Bastian series. Although Alicia appears quite reckless in her decisions, Tony appears to be a man for whom any woman would bend the rules. There really isn't much else to say that hasn't already been covered in a review here. The book is a good one to curl up with on a cold winter night. Nicely done and fun to read.

Published by Thriftbooks.com User , 18 years ago
Tony meets Alicia over a corpse, not the most auspicious beginning, but definitely a grabber for the reader.Alicia is a poor but ingenious 24-year-old spinster, masquerading as a widow for propriety's sake. The family keeps up a pretense of genteel wealth while living on borrowed money for one London Season in order to launch Alicia's lovely younger sister. In addition to the two young women, there are three engaging younger brothers.Tony, who has newly inherited the title of Viscount, is recently returned from Europe where he spied behind enemy lines, not the most well-accepted form of service for a gentleman at the time. He's a typical SL alpha male, and I don't mean that in a bad way!Tony quickly decides Alicia is The One, and goes about to fix her affections. He plans to propose after he's cleared up the murder. Alicia is disinclined to resist Tony's seductions even though she's mistakenly sure Tony's intentions aren't honorable. While Tony hunts the murderer and seduces Alicia, Alicia's sister falls in love with a suitable young man, and the reader is treated to all these stories intertwining in a very satisfactory way.The Bastion books are set just before the Cynster books. None of the Cynster men is yet married, which gives Tony a chance to glare territorially at Demon Cynster. (Devil got elbowed out of the way in the first Bastion book.) Old favorites like the Dowager Duchess of St. Ives and crotchety Lady Osbaldestone help drive the plot along when the story shifts to the ton. Tony made his bow in Captain Jack's Woman, and Jack returns the favor by making an important appearance here.Altogether, a delicious foray into post-Waterloo era romantic suspense. Oh, and it's pretty dang sexy, too!

Stephanie Laurens Is Back

Published by Thriftbooks.com User , 18 years ago
"A Gentleman's Honor" is the 2nd Book in the Bastion Series. Though I enjoyed the 1st book in the series, A LADY CHOOSEN there was alot of background needed to get the reader up to speed. I feel with the second book, this book, that SL was able to focus on the story line and the hero and heroine more.As always Alicia is a strong and independent SL Heroine and is not likely to let our hero Tony come in and just save the day, not with out her knowing what is going on. We get to know more of the members of the Bastion club, sort of wetting our appitites for the books to come.SL also brings back characters from her Cynster series, nice to see characters we love before they are married, as well as the hero and heroine from her book "Captain Jacks Woman" Though its nice if you have read CJW it is not nessesary to enjoy "A Gentleman Honor." If you like SL you will more then like enjoy this book too.
Trustpilot
Copyright © 2022 Thriftbooks.com Terms of Use | Privacy Policy | Do Not Sell My Personal Information | Accessibility Statement
ThriftBooks® and the ThriftBooks® logo are registered trademarks of Thrift Books Global, LLC