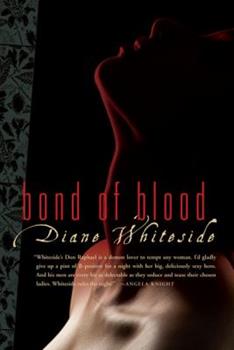 Vampire fiction with a twist-and a touch of Texas heat. First in an exciting new trilogy. Former Spanish knight Don Raphael Perez has been a vampire for seven centuries, and is now the leader of the largest vampire territory in North America, spanning Texas and Oklahoma. But a rival is challenging his rule. Then he meets veterinarian Grania O'Malley, who's never felt the touch of a man. Raphael has sworn never to initiate a woman into the eternal...

first of a wonderful, unusual trilogy

Published by Thriftbooks.com User , 13 years ago
This is, if I'm not mistaken, the first in a trilogy featuring the Texas vampires we met in The Hunter's Prey: Erotic Tales of Texas Vampires (Texas Vampires) (Berkley Heat). And boy, did it make me homesick. It has the same sensuality of the anthology, but this time there's a romance as well. Grania is a wildlife veterinarian at the Texas Hill Country Raptor Center, and Don Rafael Perez is a 700-year-old vampire who controls the Texas territory. Rafael and his territory are being threatened by old enemies, so when Grania shows up in the woods when he's feeding, his initial response is suspicion. All too soon, though, it seems that they have a rare connection, and his suspicion is replaced by a desire to possess and protect her. Grania is no less surprised, because Rafael is the man who's been in her dreams since she was a child. I really enjoy this series (I'm including the erotica anthology here) because it's sensual and well-written, but also in large part because it's unusual. Most vampires in fiction come from northern or eastern Europe. Don Rafael and his oldest compatriots come from Spain. There are Spanish terms for all the positions in his territory--his military commander-in-chief, for example, is the alferez mayor, and a vampire sire is a creador. He also uses Spanish words sprinkled here and there. There's a glossary at the back of the book, but even though I don't speak Spanish, I only referred to it on occasion. It was interesting to get the exact translations, but the terms were easily understandable from the context. The conflict with the old enemy was tense, and I appreciated the concept that Don Rafael had learned over the course of two centuries of torture at his hands, to lose to him. It added a nice psychological edge to the final battle. The only quibble I have is that in the beginning of the book, an owl speaks to Grania, and that thread isn't followed up on. I'm looking forward to more books in this series.

Published by Thriftbooks.com User , 14 years ago
Bond of Blood is an excellent book that contains every aspects of a thriller, a paranormal, and a romance. The characters have enough human qualities, such as love, greed, and revenge while the vampire and were parts of their persona are more than facinating. The sex is shocking but loving between Don Rafael and Grania. The background characters are essential to the book and I can't wait for the sequels. The use of Spanish and French is well placed in the dialouge. The languages never go beyond a high school class and there is even a glossary of terms at the end of the book. I recommend this book easily to all.

No problem with language here!

Published by Thriftbooks.com User , 14 years ago
This was my first venture into paranormal erotica/romance, and despite my busy schedule, I could not put this book down at night! I really liked the pychological twists with the good vs. bad vampires. Hey, haven't we all met our share of the bad vampires? And the thought of a noble vampire with paranormal sexual/romantic abilities sounds good to me! As for the complaints above of the foreign languange peppering, I liked it. I don't speak Spanish, but I can spot erotica and sweet-talk in any tongue, especially in obvious context. I do know a little basic Latin and enjoyed the characters from an era when Latin was the religous language actually using Latin, and it wasn't all that much or often to overlook for those who like their religion in English, even from a time when it was always in Latin. It was a learning experience, with all the levels of vampires. I look forward to the rest of the trilogy!

Published by Thriftbooks.com User , 15 years ago
Don Rafael Perez has had 700 yrs to remember all of his loses. Once a noble knight for the king he clings to his code of honor. He is the leader of the largest vampire territory in North America. But soon an old enemy is going to try to challenge this and take it all away from him. Rafael has not been alone this whole time and has cherished all the women he has put into ecstasy while he feeds. But when he meets Grania O'Malley the new Vet at the Texas Hill Country Raptor Center. he realizes that she is not only going to be a bit more difficult to seduce but that there is a special bond between them. Grania does not understand why she is not in control of her body lust when she is around Rafael or what the dreams she has had since she was a child in the orphanage reminds her so much of him. Her dreams are about Rodrigo and he has been dead for many centuries, but still every time she looks into his eyes they are the same eyes she sees when she is in her dream lovers arms. Can dreams come true?

Published by Thriftbooks.com User , 15 years ago
For seven hundred plus years, Spanish knight Don Rafael Perez has been a vampire and now he leads the Texas Oklahoma chapter. Madame Celeste head of the New Orleans contingent warns Rafael to cooperate or her assassins will take care of business. He knows that means the evil Diego, a former agent of the Russians who wantonly kills and enjoys torture; Rafael knows that first hand. Now Rafael plans to destroy his foe, who murders anyone in his way as collateral damage is road kill to this malevolent person. However, Rafael's world spins out of control when he meets Texas Hill Country Raptor Center veterinarian Grania O'Malley; his shock is less than hers as she recognizes him as the hunk that has starred in her lustful dreams. As they become acquainted and begin to fall in love the mortal animal doctor is stunned further when she realizes her beloved is a vampire, whose prowess thrives on sex; something she gladly offers him. Celeste and Diego know how to destroy their enemy as Rafael has an Achilles' heel, Dr. Grania O'Malley. BOND OF BLOOD is an exhilarating heated vampire romantic suspense thriller that makes the world of the undead alive through the political power struggles. The action-packed story line stars two courageous ethical star-crossed lovers who know their heated chemistry is taboo. The villain is an evil killing machine who brings the non-sexual intrigue and tension to Diane Whiteside's terrific paranormal romantic suspense thriller. Harriet Klausner
Copyright © 2020 Thriftbooks.com Terms of Use | Privacy Policy | Do Not Sell My Personal Information | Accessibility Statement
ThriftBooks® and the ThriftBooks® logo are registered trademarks of Thrift Books Global, LLC