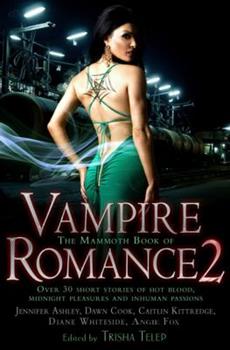 The Mammoth Book of Vampire Romance 2

This exciting follow-up to the wildly successful Mammoth Book of Vampire Romance contains 30 short stories of hot blood, midnight pleasures, and inhuman passions. Containing the best names in the field, such as Eileen Wilks, Caitlin Kittredge, Jennifer Ashley, Dawn Cook, and Diane Whiteside, this compilation is sure to arouse attention.

Published by Thriftbooks.com User , 12 years ago
Editor Trisha Telep has done it again, she's used her connections - and apparently her cyberstalking talents - to amass another BIG batch of vampire quickies - 25 in all. If you are a short story fan looking for a whole bunch of little reads perfect for squeezing into even the busiest of schedules, this is the book for you. Unlike its predecessor The Mammoth Book of Vampire Romance (Mammoth Books), not only are the majority of the stories presented here actually romances, but a good number of the authors successfully delivered tales complete with back story, hookup and at least the promise of a `happily-ever- after' in their small number of allotted pages. Most of the stories here avoid the darker side of vamp romance but there are a few that shun the light. If you are an avid urban fantasy and paranormal romance fan like me, you'll recognize most of these authors, but even I discovered a few I hadn't read before. My favorites stories were the ones by Bacon-Smith, Stein, Trent and Aguirre. And though there didn't seem to be as many connected stories in this incarnation of the 'Mammoth Book' - quite a few of the authors seemed to be breaking into new territory - Ione's Demonica short was good too. So here's just a few words each to give you an idea of what's lurking within MBofVR2's 556 pages. 1. Jordan Summers - "Paris After Dark" -- A NYPD cop broken by the loss of her partner, finds a new life in Paris after a run in with a vamp serial killer - While the heroine gets a resolution, I liked that Summers didn't try to force a HEA on the starring pair. She just delivered a romantic connection complete with hook-up and left the HEA to the readers imagination. (4 stars) 2. Deborah Cooke - "Coven of Mercy" -- An oncologist who refuses to ever quit the fight, learns of mercy from an unusual `angel' - The hero had potential but his part of the story was too brief to make up for the fact that, although she was fairly well developed, I just didn't connect with the heroine. (3 -stars) 3. Karen MacInerney - "Le Cirque de la Nuit" -- A circus aerialist whose performance stirs a hidden watcher, wants to go solo in the spotlight, but is she willing to pay the cost of succumbing to the dark allure of Le Cirque de la Nuit? - Not a romance, even though there is a sensuality to the woman's performance, vampire fans who like their vamps with bite will appreciate the dark HEA. (3 stars) 4. Caitlin Kittredge - "Perdition" -- Doc Holiday is a vampire slayer in the old west - The romantic elements of the story are told in flash backs, but for some reason this one just didn't grab me. - (3 stars) 5. Dina James - "Deliver Us From Evil" -- A fake psychic eases a vampire's hunger - I was hoping for a continuation of Jame's story from the Mammoth Book of PNR, so that may have colored my reaction. (3 - stars) 6. Camille Bacon-Smith - "Blood and Thyme" -- The owner of vampire catering company, whose servers are also the hordeuvres, needs to find a chef when huma
Copyright © 2020 Thriftbooks.com Terms of Use | Privacy Policy | Do Not Sell My Personal Information | Accessibility Statement
ThriftBooks® and the ThriftBooks® logo are registered trademarks of Thrift Books Global, LLC