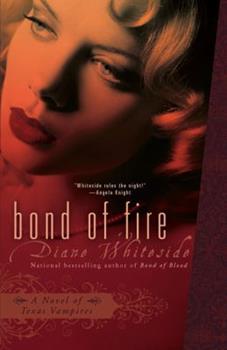 A sexy, paranormal romance about vampires in Texas, this novel features Helene d'Agelet, who must choose between simmering passion and family loyalty."

Actually 4.5 If You Like Your Books With More Substance

Published by Thriftbooks.com User , 14 years ago
After reading all of this author's books, I thought I had a better handle on her style of prose. This one caught me by surprise. Typical in this series is the mish-mash of languages--French. Spanish, Imaginary--and the heaviness of the writing. I believe there is aspiration towards literary fiction because the prose is intense, thickly written and nothing you can causally read through. That said, doggone it, I liked her characters and the detail she builds into them. Although sometimes I wanted to smack the book against the wall for ponderous writing--check out the first seduction scene and the e-t-e-r-n-i-t-y it takes for the knickers to scoot. That's not sexy--that's tedious. But I kept with it because I liked the characters, each very well defined and with a story of their own waiting to be told. This author remains an auto-buy for me, but I do it with heavy sighs knowing it's going to be a loooong read.

Published by Thriftbooks.com User , 14 years ago
Anyone know of any hot romance books where vampires turn into bats? I've always been a werewolf-type person with paranormal books. I just love the part where man(or woman) becomes beast. So, any paranormal romance books that have a vampire character(s) that transforms into a large bat?

Published by Thriftbooks.com User , 14 years ago
I liked this book, but, I liked the first one better. However, I will be reading the next in the series. I am hooked.

Published by Thriftbooks.com User , 14 years ago
During the French Revolution, Jean-Marie St. Just met Helene d'Agelet in Paris. They fell in love, but were fated to separate as he was turning into a vampire and she was a mortal. However, he remained unaware that after he left her she was changed over too. Over the next two centuries fate seemed to intervene keeping them apart. In the present, Helene is stunned to see a photo of her beloved Jean-Marie that indicates he is alive. She searches for him so that they can finally share eternity together. However, they still have issues between them as Jean-Marie has been assigned the task of killing the wicked vampire Queen of New Orleans Hélène's sister, Madame Celeste. Although much of the story occurs before the first tale (see BOND OF BLOOD) the second of Diane Whiteside modern vampire trilogy is an exciting horror thriller. Readers obtain a bit of the history that led to the vampire kingdoms that carve up much of modern day America. Interestingly the lead couple spends much of the two hundred plus years (and most of the book) separated to the chagrin of romantic fantasy purists; yet the look through time strengthens the final showdown making BOND OF FIRE an entertaining read. Harriet Klausner

Published by Thriftbooks.com User , 14 years ago
Jean-Marie St. Just and Helene d'Agelet share a long and tormented past, with brief moments of great joy together. Tragedy tore them apart centuries ago, with each believing the other dead. Follow this pair as their romance traverses several centuries, from the time of their initial meeting in 1787 Paris to their reunion in present day Texas. Through all of their travails, in all of their years, neither vampire has forgotten the other, nor has their love abated in the slightest. But an old enemy is determined to see them destroyed... With the second story in her Texas Vampires series, Bond of Fire, Diane Whiteside delivers a complex and captivating paranormal romance sure to delight her fans! This books encompasses a range of genres, from regency historical to modern paranormal. I have to admit, I found the first book of this series, Bond of Blood (Texas Vampires, Book 1) a little difficult to read. The story and characters were wonderful, but the book contained so much Spanish that it was hard to read if you don't have a good grasp of that language. I was nervous that I would have the same difficulty with Bond of Fire, but Whiteside did a much better job of weaving both the French and Spanish languages into her prose and dialogue so that the context made it easier to deduce the meaning of the foreign words. In addition, she includes a glossary at the end of the book that guarantees the reader will be able to fully enjoy her story. As a lover of both historicals and paranormals, this book was right up my alley. With a cast of vampires, it was natural for the story to progress from the 1700s to the present day. The lengthy time span provided many a compelling scene, with subplots guaranteed to thrill the reader as much as the one major intrigue that spans the many centuries in Bond of Fire. Along with Jean-Marie and Helene, we experience great joy, heart-rending pain, and ultimate satisfaction when the happy ever after is finally delivered. We also see a return of the characters we fell in love with during Bond of Blood. In fact, due to Jean-Marie's long association with Rafael/Rodrigo Perez, we learn much more of Rafael's past and how it affects Jean-Marie. With this book, Diane Whiteside gives us a story of great betrayal, steadfast friendships, and abiding love - three elements sure to touch even the most hardened of hearts. Series Order: Bond of Blood (Texas Vampires, Book 1) Bond of Fire (Texas Vampires, Book 2) Connected Books: The Hunter's Prey: Erotic Tales of Texas Vampires (Texas Vampires) (Berkley Heat)
Trustpilot
Copyright © 2022 Thriftbooks.com Terms of Use | Privacy Policy | Do Not Sell or Share My Personal Information | Accessibility Statement
ThriftBooks® and the ThriftBooks® logo are registered trademarks of Thrift Books Global, LLC