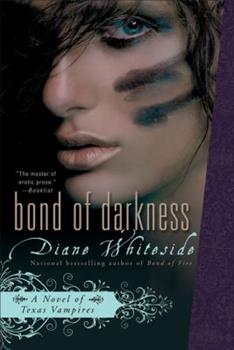 National bestselling author Diane Whiteside delivers the third and final novel in her acclaimed Texas Vampires trilogy. Texas Ranger Stephanie "Steve" Reynolds knows all about vampires, since she has a demon lover of her own. For the past several years, Ethan Templeton has been helping her on cases when he wasn't sharing her bed. But Steve, craving mortal motherhood, refused to get serious about the handsome vampire. Especially after she saw him kill...

Reviewed by Wild on Books!

Published by Thriftbooks.com User , 12 years ago
Stephanie Reynolds, Steve as she prefers, is on the trail of a murderer. As a Texas Ranger, she has heard and just about seen it all but when the deaths of young women - otherwise healthy young women - begin occurring at an alarming rate and can not be explained, Steve knows that the killer she is searching for is not normal. How does she know this? She is the lover of a vampire. She knows that the foul entity that is murdering these women could be nothing less than what her lover is and actually, if she is honest, the killer could in fact, be her lover. Vampire Ethan Templeton is the protector of the most influential and powerful vampire in Texas. As the leader of his boss' military, Ethan has more duties to fulfill than he actually wants. His patron is not an easy man to protect to say the least and Ethan has his hands full trying to protect him as well as making sure that other vampire clans do not come to Texas with the intent of overthrowing his boss. If things could get worse, they would but Ethan doubts it. Now he has to contend with the deaths of several young women that put him in the direct line of suspicion. Ethan is innocent but isn't so sure that Steve, his lover, believes him. If one thing is certain in BOND OF DARKNESS, it is the fact that Steve and Ethan love each other. They trust each other; after all, they have been lovers for over fifteen years and the only reason Steve is not a vampire is because Ethan's boss has a strict rule against turning humans. Ethan fights with this knowledge and I could sense his absolute longing and desire to make Steve his forever. Steve loved Ethan just as much. She wanted to believe and him and while I think her job made her less trusting, I honestly think that she trusted Ethan explicitly. Their every touch was sensual and gratifying to read. BOND OF DARKNESS surprised me completely and in a good way. I felt before I started that I had read every type of vampire novel alive and unrightfully judged this novel before I started. I knew it would be a good read, Diane Whiteside does not write anything less, but I wasn't sure if it would be original. What a marvelous read BOND OF DARKNESS turned out to be! The world of the Texas Vampires just wound its way around my heart and before I knew what was happening, I had engulfed the entire novel in one sitting. The sensuality and love of the two main characters was especially noteworthy because they truly belonged together. BOND OF DARKNESS not only captured my attention but it held it steadfast the entire book. Suspenseful, sexy, and seductive, BOND OF DARKNESS will hold you enslaved and not let go. And frankly, I did not want it to. BOND OF DARKNESS released October 7, 2008 and since it is the third installment of a series, I highly recommend reading the first two novels of this addicting series. The Texas Vampires Series: Bond of Blood, Book 1 Bond of Fire, Book 2 Bond of Darkness, Book 3 ***Natalie S. for Wi

Published by Thriftbooks.com User , 13 years ago
Texas Ranger Steve (Stephanie) Reynolds needs help finding a killer. Unexplained deaths of healthy young women are becoming entirely too numerous. And the only man she really trusts, is the only man she knows of, who could have committed the crimes. Ethan Templeton is the military leader to the most powerful vampire in Texas. He has his hands full protecting his patron, his patron's love interest and keeping rival vampire's out of Texas. Now it looks like Steve's case is linked with his search for his patron's enemies. Ethan and Steve have been lovers (off and on) for 15 years. Ethan would love to spend all of eternity with Steve, but he will be executed if he breaks his patron's laws and turns her. He is contemplating the end of their relationship when circumstances force him to make a choice. He is more than willing to accept the consequences in order to save the woman he loves. I love Diane Whiteside and she hasn't disappointed me yet. Bond of Darkness is the latest in Ms. Whiteside's Texas Vampires series. Her world of vampires is complicated, intriguing and sexy. Just the kind of story to draw you in and keep you there. Ethan and Steve are so captivating, I couldn't pull myself away from them. I even got teary a couple of times. A definite keeper. I Joyfully Recommend Bond of Darkness. Willow Reviewed for Joyfully Reviewed

Published by Thriftbooks.com User , 13 years ago
I must say, right from the beginning, that I found the sex scenes between Steve (Stephanie) Reynolds and Ethan Templeton to be hotter than a scalding steam bath. A reading of certain passages will keep you burning on a cold night. Steve is a tough gun toting Texas Ranger ready to go after whatever nasties are around. There is, however, another side to her. Steve has dreams of a nice little house with a white picket fence and little kiddies running around the yard. Here's the problem. She is madly in love with Ethan a hot, hunky, sexy guy who is also a vampire. That means no little house, or little kids, and absolutely no picket fence. In a moment of madness she breaks away from Ethan and marries Fred, much to her regret. The marriage didn't last, of course, and as soon as she is once again available Ethan let her know he is ready to take up where they had left off. So is she! Their get-togethers are to die for. But Bond of Darkness is more than erotic fantasy. It is also a gritty tale of justice seen mainly through the eyes of Steve and Ethan. Steve hunts down dangerous drug dealers and then goes after a serial killer that makes the viciousness of the drug lords look like child's play. Ethan owes allegiance to Don Rafael, a 600 year-old, powerful vampire who rules Texas and Oklahoma. The Don is furious because of the horrific murders that have taken place in his territory. It will be up to Ethan and his men to hunt down the killer. Steve and Ethan do love one another but Ethan's poor impulse control, even when in Steve's defense, causes a serious breech. Not to worry! This is a romance after all, and a darn good one.

Published by Thriftbooks.com User , 13 years ago
Bond of Darkness by Diane Whiteside Oversize trade paperback release date: October 7th, 2008 Rating 4 stars Bond of Darkness is a non-stop vampire thriller. This is the third in Diane Whiteside's Texas trilogy. From page 1, the story begins at full throttle without letting up as Texas Ranger, Stephanie `Steve' Reynolds, searches for a serial killer-hoping it's not her `sinfully' handsome vampire lover, Ethan Templeton. The duo work together to solve the mystery and are caught up in old jealousies from the past, murder attempts, and drug smuggling. For first time readers, I recommend reading the first and second books from this series to fully appreciate the complexity of this romance. The storyline jumps to different time and places throughout the book, making it exhilarating, but, unfortunately, difficult to keep up with the action. In a few areas of the plot, I concentrated so much to understand what was occurring, that I lost the enjoyment of the book! Diane Whiteside's book brims with the richness and flavor of the Spanish past making you feel at home in old-time Texas . The vampire culture and social structure are well thought out and intriguing. Those expecting Whiteside's usual dose of steamy scenes may be disappointed; however, those who have loved the heroes Don Rafael and Ethan Templeton will satisfied with this series conclusion. Reviewed by Steph at Bookaholics Romance Book Club