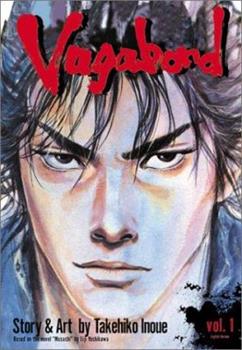 by Eiji Yoshikawa and Takehiko Inoue

In Tokunaga-era Japan, a new government has just taken power and the land is disarray. Amidst the turmoil, a young man sets out on a journey seeking spriritual enlightement by way of the soword, prepared to slay anyone who gets in his way. Adapted from the fictionalizad biography Musashi by Eiji Yoshikawa, this graphic novel depicts the life and times of real-life "sword saint" Miyamoto Musahi(1584-1645)

Published by Thriftbooks.com User , 12 years ago
Those who are interested in starting Vagabond have no reason not to buy this version, considering it's got 3 books in one and costs half the price of buying them separately. Besides being thicker, the book is also a bit bigger both horizontally and vertically so you get bigger pages-and believe me this is a series where you will want big spreads in order to admire the art. As for the series itself, it's based off of the life of the world-renowned swordsman Miyamoto Musashi, and is a seinen manga (meaning it's aimed at adults). Be aware that it's not extremely historically accurate though, as it is meant to be entertainment and the actual details of Musashi's life are too vague to really piece together. That said, Takehiko Inoue does a great job adapting the man's life into a truly intense and interesting storyline, both thanks to his storytelling skills and his gorgeous artwork. Also as a note-it is a violent manga but not mindlessly so. Basically, if you're interested enough to have read this far then I say definitely go for it. You won't be disappointed.

Published by Thriftbooks.com User , 18 years ago
I bought this manga without ever having heard of it and it quickly became my favorite. I usually don't read manga (though i do watch anime) but this one I fell in love with. I would suggest it to anyone. Beautiful artwork, neat story and the fact that it's historically based is the icing on the cake. I can't wait to read the rest.

Fantastic manga, not even one like this in every 10 years.

Published by Thriftbooks.com User , 19 years ago
I've been reading various Manga for more than 15 years. I read Japanese manga in various genre not only ones in English but also the old ones that never made it to English translation. The first two volumes of Vagabond so far are fantastic. Definitely a tall cut above the average. I can even compare it across genre and say it's a lot better than Akira Toriyama's Dragon Ball (one of my top choices before I read Vagabond).Vagabond is very poetic and alive. It fully exploits the advantage of the manga as a media and I feel the scenes from the comic are actually more alive than movie or novel. Look carefully at the expression of the characters. My favorite is Takuan Soho - it feels almost like you can get a glimpse of "Satori enlightenment" just by looking at his features as drawn in the manga. Beware that you may end-up being converted into a big Musashi / Japanese swordsmanship fan after reading this manga! This graphic novel is very absorbing!

Published by Thriftbooks.com User , 19 years ago
This is a very good historically based Manga. anyone interested in Japanese culture , swordsmanship , or likes a serious comic should pick this one up. The artwork is great and gives a fleeting and suspenseful sense of whats going on.I warn that this has some very violent and adult situations but the overall story is excellent.If you liked the book "Musashi" or "the Book of Five Rings" this is a definate pick!

This manga has transcended the level of manga !!

Published by Thriftbooks.com User , 19 years ago
Super-excellent!!I, as a Japanese, have been engaged myself in reading manga for more than 20 years. I know a lot of manga I can truly recommend, but this is the very masterpiece! Although this manga has many violent scenes, they are expresssing the "lives" we live. I also recommend this manga to those who are insterested in Zen Buddhism and enlightment.
Copyright © 2020 Thriftbooks.com Terms of Use | Privacy Policy | Do Not Sell My Personal Information | Accessibility Statement
ThriftBooks® and the ThriftBooks® logo are registered trademarks of Thrift Books Global, LLC