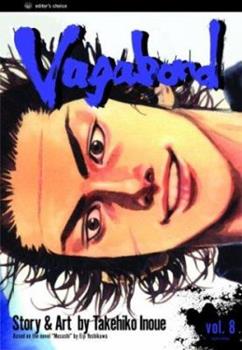 In Tokunaga-era Japan, a new government has just taken power and the land is disarray. Amidst the turmoil, a young man sets out on a journey seeking spriritual enlightement by way of the soword, prepared to slay anyone who gets in his way. Adapted from the fictionalizad biography Musashi by Eiji Yoshikawa, this graphic novel depicts the life and times of real-life "sword saint" Miyamoto Musahi(1584-1645)

Published by Thriftbooks.com User , 12 years ago
Bought 1-3 in separate manga editions, but bought this one on the strength of those showings. I'm going to continue with the series and the format because they both deliver.

Published by Thriftbooks.com User , 12 years ago
Tis' the story of the ichiban swordsman in all of Japan. Partake in it and it will carry you away into the days of Fuedal Japan and into the mind-set of legendary SWORD-SAINT... Miyamoto Musashi

Even better than the First

Published by Thriftbooks.com User , 15 years ago
Vagabond is about the journey of Takezo, a young man, future master swordsman, who is in search of purpose and meaning to his life. In the first book he thinks its to become the best swordsman by challenging and defeating the best in the world. Having experienced disillusionment about people, he meets a monk (You'll love this guy) who strives to teach Takezo the value of a person, beginning with the youth. Book 2 gives us more of Takezo's background as he desends into a bestial killing machine. Can the monk help Takezo save himself? No alone. If you like Manga that does not romanticizes war or swordsman, Vagabond should peak your interest. The storytelling is excellent in the drawings, more so than the text. I would rank such adept skill in the same arena as Lone Wolf and Cub. LWC is the standard for balancing poetic story telling and showing the hardcore grit of life as a swordsman. The Vagabond sereis starts with a youth, a teen, not a man with a child. So Takezo maturity is not yet there. What drives him to succeed and overcome his past makes this series promising. The characters show a range of emotions in this manga, and the situations they deal with does an excellent job of targeting a mature audience. Takezo struggle for "his" truth becomes ours to learn from his journey about becoming complete. Read each book like a wine, one delicious sip at a time, enjoy the flavors.

Published by Thriftbooks.com User , 18 years ago
Vagabond is one of the few stories I have read that make me sweat with anticipation before flipping to the next page. The action becomes so intense you will feel bad you're flipping through the pages and missing the superb artwork in you're haste to discover the outcome of the last few pages. Overall the action is some of the best I have seen in the manga format. A powerful story of one man's quest to become "invincible under the sun", Miyamoto Musashi drifts through the world questioning his one principle: his strength. A raging beast in battle, Musashi, only knows what it is to fight but gradually learns of the world beyond strength, blood and death throughout the course of his duels. Some fights take up entire volumes but they are well worth it. The one negative aspect of Vagabond would have to be that not all the volumes are translated yet, and the reader might have to wait for the next volume to come out. Maybe the age-old story of "the quest" might seem cliché to some readers but if you can stomach it, Vagabond does its take on Musashi's journey in swordsmanship incredibly well. I am not a Samurai buff, or even a big action fan but Vagabond's has me sold. I have read most (no lie) of the English translated manga you can find in America and easily place Vagabond right up there with Nausicaa, Maison Ikkou, GTO, Akira and Ghost in the Shell. I believe that all types of comic readers can appreciate Vagabond although shojo manga (girls comics) readers might be a little put off by all the blood and death. A must have.

Published by Thriftbooks.com User , 19 years ago
I just found out about these titles, bought and read them before I could throw out the box they came in. Being a martial artist and student of Iaido (Japanese sword drawing), I am very Familiar with the Musashi story. Yet these books (vol I & II ) are told from a fresh perspective that keeps you tuned in. I can't wait for the rest of the series to follow. The artwork alone makes these books worth buying.Also worth a look are the Lone Wolf and Cub Series...
Copyright © 2020 Thriftbooks.com Terms of Use | Privacy Policy | Do Not Sell My Personal Information | Accessibility Statement
ThriftBooks® and the ThriftBooks® logo are registered trademarks of Thrift Books Global, LLC