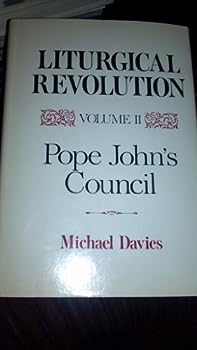 (Book #2 in the Liturgical Revolution Series)

Must reading for every fair minded Catholic!

Published by Thriftbooks.com User , 22 years ago
Pope John's Council is an unbiased examination of the procedure, work, documents, and friuts of the Second Vatican Council by the President of the International Una Voce Federation. Its fair, even-handed approach is to use large quotations from Popes, bishops, theologians, and Protestant observers who participated in the council.Mr. Davies cogently argues that it is the ambiguity in the conciliar documents themselves, not the "Spirit of Vatican II" alone, that has lead to so much confusion. Pope John's Council goes a long way towards explaining causes of the devastation in the Catholic Church that Cardinal Ratziger has commented on extensively the last few years.

Description in Detail: The Revolution in the Church

Published by Thriftbooks.com User , 23 years ago
This is an outstanding account of the events that revolutionized Catholicism. The fruits of the revolution abound around us. Millions of Catholics lost their religion, and the larger society has changed irreversilby since the Council of the mid 1960's. How did this happen? Why did the traditions of nearly 2000 years get jettisoned in an apparently mindless quest for "relevance". This book details what may be the most significant event of the twentieth century. It is certainly the most underappreciated event. It is written from an unabashedly traditionalist viewpoint and describes the revolution within the Church and how it was executed. Pope John's Council is the second book in Davies' trilogy and is the most accessible of the three. Anyone curious about what has happened to either Roman Catholicism or Western Civilization over the past 30 years needs to read this book.
Copyright © 2020 Thriftbooks.com Terms of Use | Privacy Policy | Do Not Sell My Personal Information | Accessibility Statement
ThriftBooks® and the ThriftBooks® logo are registered trademarks of Thrift Books Global, LLC