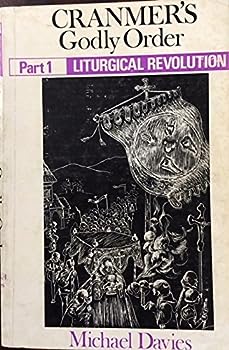 (Book #1 in the Liturgical Revolution Series)

This description may be from another edition of this product. "Cranmer's Godly Order" is a classic...revised and expanded by Mr. Davies during his final years. Drawing upon the best of Catholic and Protestant scholarship and on primary sources, Davies traces the...

Published by Thriftbooks.com User , 11 years ago
One of the best books on the subject of the English reformation I have ever read. Mr. Davies rewrote the book in the 1990s to take advantage of the best current scholarship, especially the excellent work by Dr. Eamon Duffy. Simply wonderful! The book is Roman Catholic in orientation, and it is clearly a bit polemical. That said, the case it makes is incredibly strong. Getting tired of the liturgical wasteland that is contemporary Catholicism, I was intrigued by a traditional Anglican Catholic Church that had opened in my area. This "Cathedral Church" is not in communion with Rome. The Bishop of this Church intends to refuse Rome's very generous offer of the personal ordinariate. Having read this book I am more convinced than ever that Anglican orders are invalid and that traditional Anglicans should respond to Pope Benedict's generous offer with hearts full of gratitude. What a blessing to be able to be able to retain what is authentically Catholic within their Anglican praxis, but still have communion with the Church in Rome. To be able to be priests of God, in communion with the Successor of Peter, is an honor beyond words. It is stunning some are responding that the offer is unacceptable. I hope they recognize how generous the Holy Father is being. This book is beautifully bound. I got mine on sale from Angelus Press, which sells all three volumes of Davies incomparable "Liturgical Revolution" series. These three books are the ones that Mr. Davies knew he would be remembered for, and they are clearly his most important. Highly recommended.

Published by Thriftbooks.com User , 15 years ago
An excellent book by the late Michael Davies, the former President of Una Voce International. "Cranmer's Godly Order" is about the destruction of Catholicism by Thomas Cranmer, the Archbishop of Canterbury. Though Henry VIII removed the Pope's authority in England as well as the church property and ransacking of all monasteries and convents---he refused to abolish the traditional Latin Mass celebrated since the conversion of England by St. Augustine of Canterbury. Thomas Cranmer's liturgical renewal has since been the liturgical service of the Church of England until today in the 21st century. The removal of the essence of the Catholic liturgy in England with the introduction of the celebration of the Lord's Supper celebrated by the Anglican minister facing the congregation and conducted in the English language rather than the unbloody Eucharistic Sacrifice offered by the priest facing the altar and conducted in the Latin language by the Catholic Church. Cranmer abolished Latin because he believed that English people should worship in their own language and have much availability in participating in worship in Mass. The altar and tabernacle were done away with and a table was placed in its former place. Communion in the hand was enforced and communion under both species of bread and wine was allowed. A detailed book on the events that led England from a Catholic country to a Protestant Anglican country until now. How this liturgical revolution of Thomas Cranmer, an apostate Catholic archbishop inspired the modern liturgical renewal of the Roman Catholic liturgy after the Second Vatican Council ended in 1965.

Excellent introduction to the protestant reformation

Published by Thriftbooks.com User , 22 years ago
This book focuses on the protestant reformation in England from the time of King Henry VIII to Queen Elizabeth I. It draws extensively from quotes by key persons involved in the Anglican reformation, as well as opponents. The author's conclusions paint a very different picture from many other texts on the subject. Highly recommended.
Copyright © 2020 Thriftbooks.com Terms of Use | Privacy Policy | Do Not Sell My Personal Information | Accessibility Statement
ThriftBooks® and the ThriftBooks® logo are registered trademarks of Thrift Books Global, LLC