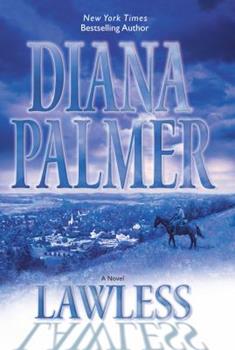 Following the phenomenal success of her hardcover debut, Desperado, New York Times bestselling author Palmer takes her fans back to the place she knows best: Texas.

Published by BBRevis , 24 days ago
I loved this book! It was my first DP book and I am still buying them. Crissy was so loving and independent. I did not like Tippy and I do not like her in future books. I would like to have read more about Judd and Crissy in future books. I did, however, like Cash's character.

Published by Thriftbooks.com User , 17 years ago
I don't usually like comtemporary romance, I sway toward historical. But this story intrigued me. I was not disappointed. There was some great dialog in this book and some things that made me laugh. There were also some very tender moments. Judd is a very lovable hero. Crissy is a good women, lots of sass and whit but she is also very loving and faithful. Cash Grier add a great deal of spice to the story as well. He's rough around the edges but it's hard not to love him. I really enjoyed this book and would recommend it. This is my first Diana Palmer book and I have already bought more.

Published by Thriftbooks.com User , 18 years ago
One of Diana Palmer's best ever. You want to root for Cash Grier 'cause he is all man. You want to tell Judd to smarten up! Men Honestly!!! Being from Texas I can tell you the author has a firm grasp of the Texas male. I'm waiting on the book on Cash.

One of Diana Palmer's Best! I love it!

Published by Thriftbooks.com User , 18 years ago
Lawless is one of Diana Palmer's best. Some people want Cash Grier to be Christbel's love instead of Judd Dunn. However, they forget that in real life people love with their hearts instead of their mind. When you love someone, you accept the best with the worst. Because the best parts is often outweighted the worst parts, you believe it is worth it. I cannot wait to see the new book that Palmer will write about Cash Grier and Tippy. It will be a great story, too.

Fans will love this one.

Published by Thriftbooks.com User , 18 years ago
Christabel (Crissy) Gaines and Judd have been friends for a long time. Though fourteen years separate their ages, she has been in love with him for years. In fact, you would think she would be thrilled, she has been his wife for five years, since she was sixteen and he rescued her from her abusive father.The drawback is that the union is only in name, Judd has never touched her, just been her friend, protector, and business partner. She is almost of age to be able to stand on her own, and then Judd will annul the marriage. To Crissy, it looks like he is more than ready for them both to move on, but Judd's life as a Texas Ranger has made a few enemies for him, and now one of them is planning to use Crissy to get to him. Will danger awaken the passion she has longed for for so long?***** Once again, Diana Palmer follows the lines that she has used to win fans and create a successful career. The days of the wild west seem closer, and she utilizes the marriage of convenience plotline that has worked well with Regencies. As always, a young, innocent but spunky heroine loves a man it would be impossible not to love. Judd, like all her Texas men, will win your heart, just as he wins Crissy's. *****

Published by Thriftbooks.com User , 18 years ago
I admit I had second thoughts on pre-ordering and paying for the hardback version of this book after being dissapointed with "Desperado", but being an avid Palmer fan I bit the bullet and hoped for the best. I'm glad I did. This book's style is "classic Palmer" without being stale, and repeating sayings and scenes from previous books. The story of Judd and Chrissy is a page turner! The characters each stand on their own and even though the heroine is young and innocent, as most Palmer heroines are, she does not come across as a wimp. Judd is a character who is strong-willed, but completely loveable. Coupled with the wonderful love story, hint of a story with the secondary characters and a murder mystery thrown in, makes this a wonderful read. One of the best things about this book is that Palmer managed to keep her unique writing style while updating it at the same time. Awesome read!
Copyright © 2020 Thriftbooks.com Terms of Use | Privacy Policy | Do Not Sell My Personal Information | Accessibility Statement
ThriftBooks® and the ThriftBooks® logo are registered trademarks of Thrift Books Global, LLC