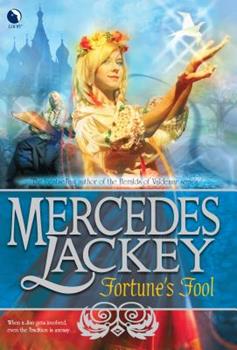 "She'll keep you up long past your bedtime." - #1 New York Times bestselling author Stephen King "The prolific Lackey (the Valdemar series) draws on the darker, Brothers Grimm side of fairy lore for her enchanting tale...". --Publisher's Weekly The seventh daughter of the Sea King, Ekaterina is more than a pampered princess-she's also the family spy. Which makes her the perfect emissary to check out interesting happenings in the neighboring kingdom...and...

Published by Thriftbooks.com User , 14 years ago
Mercedes Lackey proves once again that she is an extraordinarily talented author. In this, the 3rd tale of the hundred kingdoms, she invites the reader to suspend disbelief and enjoy. Her characters pit themselves against the force of the "tradition" of fairy tales and create fantastic solutions to the problems put into place by not only the other characters, but the the ruling magic of the realms, the "Tradition". This book was fun to read and kept you turning the pages just to see what would happen next. It easily stands alone, but if you have read the first two books in the series you will get some inside jokes and touch on those characters as well. Wonderful!

Published by Thriftbooks.com User , 14 years ago
If you absolutely abhor love stories then this is not the book for you. While love stories are not my favorite storyline, Mercedes Lackey managed once again to make the story more than your typical girl meets boy. I grew up on the fairy tales in these books and the adult spin has me eager for more. The main characters are well developed and I enjoyed catching up on old friends from prior books. Even if you have not read the first two books in the series you will be able to enjoy this stand alone third book. I can not wait for book four!

Published by Thriftbooks.com User , 14 years ago
i'm not real good at this, but i loved this book. i started to read it in a library and couldn't wait to get my own copy. Mercedes Lackey, as always, writes a great story. I would recommend this to any Lackey fan.

A Fool and His Honey

Published by Thriftbooks.com User , 15 years ago
Fortune's Fool (2007) is the third fantasy novel in the Five Hundred Kingdoms series, following One Good Knight. In the previous volume, the evil Queen Cassiopeia and her lover Solon had a fatal falling out. Godmother Elena performed some transformative magic and then conducted a double wedding. The dragon couple flew off to Glass Mountain to become the first dragon Champions and the human couple remained behind to become the Queen and Prince-Consort of Acadia. In this novel, Princess Ekaterina is the seventh daughter of Sea King Vladislav. Katya is the only one of his children who can operate equally well on land or under water. Thus, she has become Vladislav's agent -- i.e., spy -- on the land. Today she is tasked with finding out why the neighboring Kingdom of Led Belarus has been peaceful for so long. Prince Sasha Feliks Pavel Pietervich is the seventh son of King Pieter Ivan Alexandrovitch of Led Belarus. Due to his birth position, Sasha is fortune's fool, a personage of luck and mischief under the local Tradition. Although the nobility and common folk think that he is just a minor nuisance, the royal family knows that he is performing an essential role within the kingdom. Sasha makes rounds of the kingdom on a random basis to weed out major problems, yet leaves some minor troubles to keep the people of the kingdom more alert. He is also a songweaver, composing songs to bend the Tradition in the proper direction. And he attends weddings to bring luck to the young couples. Katya meets Sasha by the seashore and soon learns why Led Belarus has been so peaceful. They both find themselves with extra time on their hands and they fall in love. They agree to marry, but then they are each summoned by their fathers and have to separate. In this story, Katya is sent to find a missing swan maiden and is soon abducted by a Jinn. Sasha becomes worried and sets out to find her. But her father finds him first and briefs him on the situation. Sasha makes contact with Katya and they start working to rebottle the Jinn. This story includes a pair of dragon Champions -- Adamant and Gina -- last seen flying off in the previous novel. Glass Mountain has provided some professional assistance to Sasha and Katya. The story is drawn mostly from Russian folk tales. It includes Baba Yaga and her chicken-legged hut, a Rusalka and her pool, and the swan maidens. Yet the story also includes elements of Japanese folklore and, of course, the Jinni of Araby. Highly recommended for Lackey fans and for anyone else who enjoys tales of an overpowering Tradition with magical clout, clever usage of the Traditional ways, and a greatly modified Traditional romance. -Arthur W. Jordin

Published by Thriftbooks.com User , 15 years ago
I've read my fair share of Romance novels and was looking for something a little different. I got it. I love this series. It really is something totally different than the normal romance novels. Great read. It gets even better in the second and third books!!!
Trustpilot
Copyright © 2022 Thriftbooks.com Terms of Use | Privacy Policy | Do Not Sell My Personal Information | Accessibility Statement
ThriftBooks® and the ThriftBooks® logo are registered trademarks of Thrift Books Global, LLC