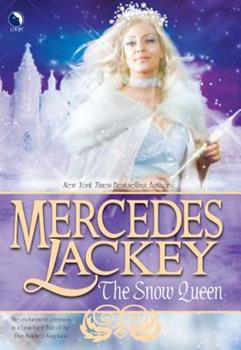 The Snow Queen (Tales of the Five Hundred Kingdoms, Book 4)

The legends of Godstruck were just that--legends. Until, in an attempt to defend her people, Captain Kallista Varyl called on the One for aid and was granted abilities such as no one had seen in centuries. Now Kallista has been charged with a new destiny as one of the most powerful women in the land--but her power is useless if it cannot be controlled. Mastering her "Godstruck" abilities is the first step. The next, learning that she cannot unlock...

Published by Thriftbooks.com User , 13 years ago
Once again, Mercedes Lackey whisks her readers off into the 500 Kingdoms. This time, it's to the far north, where there is a case of stolen identity. This book seems to be slightly slower than the first three in the series, but it still makes you want to curl up in front of the fireplace with a mug of hot chocolate and the book.

When fairy tales are not so sweet--enjoyable

Published by Thriftbooks.com User , 13 years ago
Aleksia is bored and lonely. As the Godmother of the north, she's stuck playing the role of Snow Queen, which means she takes away spoiled boys, gives them what they think they want, and lets them discover they would have been happier with their girlfriends back home. It's an important job, but just when the boys become human it's time to send them away again. When Aleksia learns that a powerful sorceress has stolen her title and is actually killing villages from the stronghold of a look-alike ice palace, she decides she's got to move from a behind-the-scenes godmother role to become an active player in the quest. The false queen has stolen a young sorcerer and that sorcerer's mother and fiancee set out to rescue him. The two join with Aleksia but, before they can confront the false queen, they are forced to deal with an even more powerful force--an Icehart. The Icehart can freeze anyone instantly, and seems an unstoppable force. Yet, Aleksia is convinced that he has a secret--one that might allow the three women (and their allies) to defeat him, but also a secret that might ultimately help them unravel the mystery of the false queen. Author Mercedes Lackey continues her Five Hundred Kingdoms series of combined fairy tale and fantasy with a strong offering. In THE SNOW QUEEN, the females form the strong players, with men available as assistants, as rewards, and as romantic interests. Lackey's magical system--the power of Tradition seeking stories to fit people into--makes for interesting story-telling and forms a clever device connecting Lackey's stories to fairy tales that formed many of us as children. THE SNOW QUEEN is an enjoyable story with just a bit of depth.

Published by Thriftbooks.com User , 13 years ago
I find Mercedes Lackey's ability to put a new spin on old favorites delightful. I would highly recommend this book and all the books in this series to anyone who enjoys fantasies

Published by Thriftbooks.com User , 13 years ago
The Snow Queen (2008) is the fourth fantasy novel in the Tales of the Five Hundred Kingdoms series, following Fortunes's Fool. In the previous volume, Guiliette forgave Rheinhardt and herself and a beam of light took her into the heavens. Katya, Sasha, the Queen of Copper Mountain and the dragons returned the Jinn to his bottle, then sent the bottle to the City of Brass to hold until the Jinn reformed. In this novel, Aleksia is the Snow Queen and the Ice Fairy, the Godmother of her domain. Although the ice and snow come from the position of her palace high in the mountains, she does have the northernmost Godmother domain. She almost exclusively deals with boys who are following traditional paths into evil ways. While Aleksia has the brownies for company and mirror contact with Godmother Elena, most of the time she is dealing with self-centered boys and love-struck girls. Her days get quite lonely and irritating. She is beginning to detest sulky boys and naive girls. Kay is her latest project. He is very clever and even more spoiled by his parents. He wears black garments despite his fair coloring and tends to stick out his lower lip when he is frustrated. Kay is well on his way to becoming a Clockwork Artificer. Gerda is a very determined -- yet dependent --- maiden who loves Kay. Unfortunately, she is currently incapable of denying him anything. She is well on her way to becoming the forgiving, defensive and verbally abused wife of an arrogant man. In this story, Aleksia has brought Kay to the Palace of Ever-Winter and given him everything he desires except company. She is acting ever so haughty toward him and has made the brownies invisible. Moreover, she is keeping the Palace rather cold so that he is always chilled. Hopefully, he will soon become so lonely that he recognizes the worth of Gerda. Meanwhile, Gerda is traveling toward the Palace to rescue Kay. She is so nice that farmers and other travellers have given her rides most of the way. But now she is traveling cross-country and is soon to be accosted by a band of robbers within the woods. Overall, everything with Kay and Gerda is following the script devised by Aleksia from long and boring experience. While she is waiting for developments, Aleksia receives a mirror call from her friend Alena. It seems that someone is impersonating the Snow Queen and something else called an Icehart is killing people. The problem appears to be restricted to the land of the Sammi. These reindeer herders are not directly served by a Godmother, but are vaguely within Aleksia's rather extended domain. At least, she is the only nearby Godmother. Aleksia starts gathering information on the impostor. Her mirror spirit Jalmari searches for mentions of the Snow Witch while she finishes up the situation with Kay and Gerda. However, the data provided by Jalmari convinces Aleksia that she must become directly involved in the new problem. This tale takes Aleksia into the Sammi Underwor
Trustpilot
Copyright © 2022 Thriftbooks.com Terms of Use | Privacy Policy | Do Not Sell My Personal Information | Accessibility Statement
ThriftBooks® and the ThriftBooks® logo are registered trademarks of Thrift Books Global, LLC