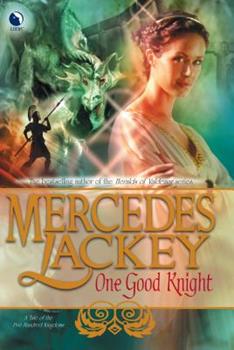 One Good Knight (Tales of the Five Hundred Kingdoms, Book 2)

One Good Knight by Mercedes Lackey released on Feb 28, 2006 is available now for purchase.

Published by Thriftbooks.com User , 13 years ago
After devouring The Fairy Godmother, I wasted no time in getting my hands on a copy of One Good Knight and I am so glad I did. I was a little worried because the reviews weren't all glowing. The heroine of this story, Andie is a poor little rich girl, the daughter of a Queen. She is undervalued and overlooked, and tends to blend into the background. She enjoys reading, researching, and spending time with six guards, who are the only people she considers friends. One day, the Queen and her 'consort', a wicked wizard, take notice of Andie's smarts and hire her on to provide information to the Palace. Shortly thereafter, a dragon is spotted making havoc in the small Kingdom. While they send for help from another Kingdom (one where Godmother Elena prosides), the palace begins a Lottery of young virgins. If that person's name is picked, they are offered up in sacrifice to the Dragon. Now Andie must find a way to free the Kindgom from the dragons and stop the sacrifices...maybe they will finally get help from a good Knight? You really should pick up this book and see how the story unfolds. There is adventure aplenty. There are also several interesting twists that work well here. The characters are charming and smart. They don't often make silly mistakes for the sake of advancing the plot. The brief visit with Elena and Alexander is exciting. In my opinion this is another five star novel. I have alredy picked up the next in the series.

Published by Thriftbooks.com User , 15 years ago
One Good Knight (2006) is the second Fantasy novel in the Tales of the Five Hundred Kingdoms series, following The Fairy Godmother. In the previous volume, Alexander and Elena organized resistance to the invasion of Fleurberg by a Dark Magician. After the death of the Katschei, Alexander and Elena were wedded, becoming Godmother and Consort. Then an Order of Champions was established at Glass Mountain, with Alexander as their Master, and Elena was given charge of Fleurberg in addition to her other kingdoms. In this novel, Princess Andromeda of Acadia is nineteen years old, but is still considered a child by her mother, Queen Cassiopeia, and Chief Advisor Solon Adacritus. She writes a report on the merchants for a trade conference and impresses both the Queen and the Chief Advisor. After that, her mother orders redecoration of the Princess wing, appoints two ladies to design her wardrobe and jewelry, and assigns a steward to handle her affairs. Andromeda is quite overwhelmed by this attention and augments her studies to further impress her mother. She notices that income from wrecked ships has grown due to an increase in the number and severity of storms. Her studies and inquiries suggest that this increase is probably due to the manipulations of a great wizard. She reports this matter to her mother. Afterward, Andromeda is resting high up in a tree within the palace garden when she notices a strange flying creature. As it comes toward her, she recognizes that it is a dragon. Then it reaches the palace and she observes that it is a very large dragon. It flames some high architectural features, grabs a couple of animals and flies away. The panic within the palace is phenomenal and the subsequent meeting of the Queen's advisors is very lively. Andromeda has quickly reviewed the literature on dragons -- consisting mainly of myths and legends -- and reports to the advisors that the only known method of managing a dragon is the sacrifice of virginal maidens. The ensuing discussion is even livelier, mostly concerning the means of choosing such sacrifices. Queen Cassiopeia states that the only fair way to select sacrifices is by a lottery. After the spate of crazy volunteers dies down, a lottery is organized. Some women find ways to disqualify themselves, but others are taken by the dragon. Rumors begin spreading that anyone who speaks out against the Queen is more likely to have a family member selected for the sacrifice. But then Andromeda is selected. This novel is mostly about the influence of the Tradition within the Five Hundred Kingdoms. Andromeda's knowledge of the Tradition comes in handy at various points in this quest. The Queen has sent to Glass Mountain for a Champion to fight the dragon, but the good knight doesn't come forward as expected. Someone has erected a magical barrier at the border to keep out such warriors. However, Andromeda is sort of saved by a Champion at the sacrificial site. Andromeda convinces t

Great continuation of a new series

Published by Thriftbooks.com User , 16 years ago
Princess Andromeda is growing up in a small island nation within the Five Hundred Kingdoms. She is desperate to become the sort of daughter that her mother will recognize and be proud of. All of her hard work, however, is jeopardized when her name is drawn in a lottery and she must be sacrificed to appease an invading dragon. This book has a completely different feel from The Fairy Godmother which really helps to emphasize the unique perspectives from within the different Five Hundred Kingdoms. Although I have to admit that the first book was slightly more engaging, overall, I thought that the plot was creative and the characters were believable. I think that if the series can continue to keep up momentum, it will be an incredible addition to fantasy collections.

Published by Thriftbooks.com User , 16 years ago
Princess Andromeda just wants to be useful. She isn't as beautiful as her mother, but she can't believe she's completely useless. When she comes up with the idea of writing up what she's learned from her studies into actionable reports for her mother's chief advisor, she finally gets the acceptance she so craves. Her mother and the advisor call on her assistance in identifying problems, researching difficult points of law, and even give her a new staff with instructions to make her look better . When a dragon invades the little Kingdom of Acadia (one of the 500 Kingdoms), Andromeda (Andie) is given the job of researching a cure to the dragon. This research job, though, definitely does not make her feel better. Until a champion can be summoned, an evil dragon can only be placated by a weekly sacrifice of a virgin. As a virgin herself, Andie is on the candidate list. Andie's research also indicates that there's something wrong in the kingdom. Too many storms are causing too many shipwrecks--possibly disrupting trade in a trade-dependent nation. As the nation has been without a Godmother for generations, magical cures to their problems are slow in coming--and even when the Champions try to send a representative, they find that they're blocked by some magical barrier. The power of magic and tradition will create a solution--but as Andie discovers, tradition likes tragedy as much as happily ever after. And falling in love with the first hero who comes along, while certainly fitting the tradition, is not anything that either Andie, or George, the hero, has any interest in. Somehow Andie has to find a way to make tradition work in her favor, rather than letting tradition take unbridled control. In the second of her 500 Kingdoms novels, Mercedes Lackey continues to play with the fairy tale genre, laughing with (certainly not at) the traditions of these stories--princesses may be beautiful or smart, but not both; foxes are clever and offer unexpected help; maidens must fall in love with their rescuers; unicorns have an uncurable addiction to virgin human females; and a ragged army has more chances of success than a professionally clad army. Andie is a likable character, not quite on the wrong side of too perfect, and not quite on the wrong side of too innocent (but close in both cases). Her ultimate romantic conflict adds to the fairy tale feel and will increase the satisfaction of Luna's strong romance readership while amusing Lackey's fantasy fans as well. I found the first chapter a little narrative-heavy as Lackey went into information dump mode. By the second chapter, though, she had picked up the pace of the story. Once she did this, ONE GOOD KNIGHT was one good book.

Published by Thriftbooks.com User , 16 years ago
From the author that brought the Valdemar series and the Joust trilogy, One Good Knight is a great read! Taking place in the land of Five Hundred Kingdoms, this story tells of the bookish Princess Andromeda who was ordinary and just wanted to please her mother. But what does one do when a dragon appears and begins to make things complicated? The Tradition is to offer the dragon virgins, and the Princess is next on the list! A strange Champion shows up to rescue her and begins a Quest through the land to find the dragon. Then unexpected things begin to happen... Taking place in the same universe of "The Fairy Godmother", one does not need to read "The Fairy Godmother" to understand the story. But I highly recommend that the two are read together! It's a great story when one is looking for a good fantasy, but not a full blown ordinary fairy tale.
Trustpilot
Copyright © 2022 Thriftbooks.com Terms of Use | Privacy Policy | Do Not Sell My Personal Information | Accessibility Statement
ThriftBooks® and the ThriftBooks® logo are registered trademarks of Thrift Books Global, LLC