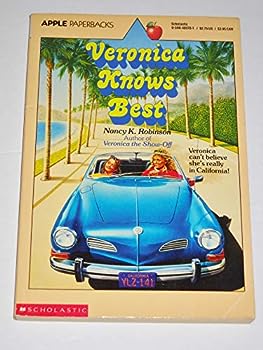 (Book #2 in the Veronica Series)

No longer a show-off, Veronica decides the best way to make friends is to "take an interest" in people and determines to practice this theory on Kimberly Watson.

Published by Thriftbooks.com User , 22 years ago
Like the first book in this series, Veronica The Show-Off, Veronica is at it again! This book is a lot of fun! Veronica is trying to make friends and she has a habit of telling outrageous stories and they get her into all kinds of trouble. Also, she gets to go visit her father who lives in sunny California (her folks are divorced). THe thing I hate though is that I think Veronica's mother is a materialistic snob who spends too much money on herself and neglects her daughter, and tries to get her to eat carrot sticks. That seems like it gives lip service to the diet world that says you have to look like a stick! also Veronica's mother makes her daughter call her by her first name because she thinks it makes her feel younger. Does that mean she regrets having kids? THat irritated me. But this book is still cool that part just made me mad.
Copyright © 2020 Thriftbooks.com Terms of Use | Privacy Policy | Do Not Sell My Personal Information | Accessibility Statement
ThriftBooks® and the ThriftBooks® logo are registered trademarks of Thrift Books Global, LLC