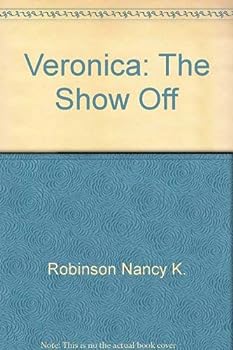 Veronica: The Show Off

(Book #1 in the Veronica Series)

This description may be from another edition of this product. Although lonely and desperately in need of friends, Veronica overwhelms her new classmates with her outrageous behavior in a bid for attention.

Published by Thriftbooks.com User , 14 years ago
Veronica's got two big problems...she doesn't have any friends, and she can't seem to stop showing off. And thanks to the second problem, she'll never fix the first! Every time she meets some girls she likes, she exaggerates and makes up stories, because she's afraid they won't like her otherwise. It's gotten so terrible, most of Veronica's classmates groan and walk away whenever they see her approaching. Then Veronica meets Hilary, a shy girl who seems to like Veronica just as she is. The problem is, though, that Veronica is so accustomed to showing off, she doesn't really know how to stop...and could easily ruin the closest thing to a friend that she's got.

Published by Thriftbooks.com User , 19 years ago
I read Veronica the Show Off which is a great book to read because it is not too short or too long. The story is about Veronica trying to make new friends at her new school, but is she showing off? That will be up to you to find out. When she finally found someone who liked her as a friend, she didn't think that she wouldn't be friends with the girls she liked. Veronica is a little imaginative because she makes up wild stories about her life and what she owns. This book is great for road trips.

THis is an excellent book.

Published by Thriftbooks.com User , 22 years ago
I first read this book when i was about 10. I could really relate to Veronica in that i was lonely and wanted people to like me, and i thought it was cool the way she wasn't afraid to stand up for what she believes in. This book covers a lot of things that young kids go thru growing up. It's a must-have!
Copyright © 2020 Thriftbooks.com Terms of Use | Privacy Policy | Do Not Sell My Personal Information | Accessibility Statement
ThriftBooks® and the ThriftBooks® logo are registered trademarks of Thrift Books Global, LLC