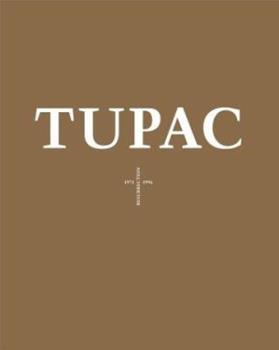 A chronicle of the life and career of the rapper Tupac Shakur, which offers a collection of previously unpublished interviews, writings, and private photographs that provide a portrait of the influential late musician.

After reading this book. It changed my way of thinking!

Published by Beverly K. Serfass , 2 years ago
I never listen to or read about TUPAC. I picked up this book and did not put it down till I was at the end of the last page. It made me think of how amazing this young man was! In the way he thought, to how brilliant this young mans mind was. After finish reading this book, I went and ordered another book so I could put one of them in my library and share one with my family and my friends. If it was up to me. Everyone that loves to read and has an opened mind or better yet a closed mind read this book! And just see if it changes their mind, as it did mine!!

Published by Thriftbooks.com User , 17 years ago
First off I want to reply to the review called "I just don't understand" by a reader in MI. Why the hell did you only give it two stars? You didn't even say ONE DAMN THING AT ALL about this book. You admit you know nothing about Tupac, never read into anything about him. Do you even have this book? Did you ever look in this book? Apparently not since you admit you are ignorant. So why the hell would you rate a book that you have never even looked at? It's people like you that ruin these forums for reviews. All you do is say ignorant crap and admit you know nothing about him and give the book a low score. You didn't even say one thing about this book. Don't you know these reviews are about the products? This isn't a forum for you discuss your ignorant opinions. You are supposed to rate the product. Also, you want to know what he did for his community? He helped out poor kids that came from single-parent families and kids that came from households where drugs were a problem. He gave them food and shelter. He kept this quiet from the media because he didn't want people to think he was doing it just to make himself look better. He did it silently because he really cared for people. Also, his music helps people. Music is very therapeutic and all kinds of people can relate to the emotions that are evident in his music. That aside, I give this book 5 stars. If you want a biography look elsewhere. This is a book version of the film Tupac Resurrection. It contains his poems, letters, thoughts, and many pictures from his early years up until the end of his life. I think it's very interesting and encourage anyone who likes Tupac and admires his passion to get this book. It's very sad to think about Tupac when you go throw this book. It appears he's been wronged and been taken advantage of his whole life. Thankfully his passion, intelligence, and immense ability to express himself let us know who he is better. This book shares some of the passion that Tupac had and is indirectly a gift from him to us.

Published by Thriftbooks.com User , 17 years ago
There are no words to describe the unique life of Tupac Shakur. Even though he died at a very young age, he still managed to live a life that's as rich and diverse as his personality. This book allows the reader to take a glance at Tupac's life and his thoughts. Unlike other Tupac books out there, this one takes a different approach. It doesnt feature several people who knew Tupac talking about him. On the contrary, it has Tupac talking about Tupac himself accompanied with many, never before seen pictures. There are photos that any Tupac fan has seen before as well as some very personal family pictures and snapshots of everyday Tupac. I have read a lot of Tupac books and trust me when I tell you THIS IS IT. Ever wondered what it would be like if you were at Pac's house and his mom was showing you the family photo album? With this book not only you will be able to experience that but at the same time you will get an access at Tupac's thoughts accompanying every page. This is the life of a man who rose from the ashes of ghetto life, who became a superstar rapper, critically acclaimed actor, wondefully touching poet and finally to us true fans, nothing short of a LEGEND. R.I.P.

Published by Thriftbooks.com User , 17 years ago
If you wanted to know anything about this phenomenal human being then pick up this book! It is totally awesome! There are so many original items in it. It's a must-have for his true fans and those just getting turned on to 'Pac. There's his lawsuit against the OPD, pictures after getting beat, the handwritten contract signed while he was in jail on sexual assault... just a whole slew of personal artifacts from the man himself. It's a treasure and a timepiece that those who really loved him, must own.

Autobiography of a poetic genius....

Published by Thriftbooks.com User , 18 years ago
Tupac has been dead for 7 years now, and despite many books being written about him, there has never been an official autobiography--until now. "Resurrection" is his official autobiography, entirely in his own words, and is written in cinematic fashion, starting with him as a young boy up until his rise as the biggest and most influential rap artist of all time.In addition to the many unpublished lyrics and poetry here, fans also get many copies of various documennts here, including letters he wrote in prison, his lawsuit against the city of Oakland after being beat up by the cops, dozens of rare photos, scripts, and more. But most important is the autobiography itself, which shows a whole side of Tupac that the media seem to negelect. Often portrayed in the press as a "gangster", Tupac was far too intelligent, well read, revolutionary, and ahead of his time to be labeled as a mere gangster. He was leader, and activist, and in many ways, a PROPHET. Though he has become one of the biggest icons of our time, many people dont seem to realize just how powerful he was and still is. This is THE essential Tupac book, as it is easily superior to any other Tupac book out there. Every Tupac fan should own this, and those who seek to understand him and his music better should also purchase this book.

A beautiful testimonial to the late Rap legend's life

Published by Thriftbooks.com User , 18 years ago
Tupac Amaru Shakur was the enigmatic Rap artist known for the "Thug Life" tattoo on his abdomen and songs in praise of strong women, such as his mother ("Dear Mama"). He was a paradoxical display of machismo and sensitivity that many consider to have been the greatest Rap artist of all time. Tragically, his life was cut short in a hail of bullets in 1996. He was only 25-years-old. His murder remains an unsolved mystery. Through glossy and high quality reproductions of hand-written songs and poetry on notebook paper, early family photos (he already had the smooth iconic Tupac face at age two), polaroids with friends (including a shot with Jada Pinket, future wife of Will Smith), photos of his rise to fame and time as the biggest star in the Rap world, copies of complaints filed against the Oakland Police for harassment (with accompanying pictures of Tupac with a black eye and other facial wounds), on up to what may be the last picture taken of him alive, TUPAC RESURRECTION is a scrapbook any fan will appreciate. Andrew Parodi
Copyright © 2020 Thriftbooks.com Terms of Use | Privacy Policy | Do Not Sell My Personal Information | Accessibility Statement
ThriftBooks® and the ThriftBooks® logo are registered trademarks of Thrift Books Global, LLC