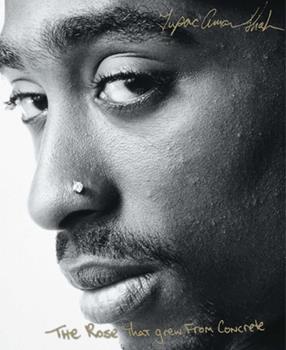 The Rose That Grew from Concrete

Tupac Shakur's most intimate and honest thoughts were uncovered only after his death with the instant classic The Rose That Grew from Concrete . His talent was unbounded -- a raw force that commanded attention and respect. His death was tragic -- a violent homage to the power of his voice. His legacy is indomitable -- as vibrant and alive today as it has ever been. For the first time in paperback, this collection of deeply personal poetry is a mirror...

The Thug of Peace

Published by Thriftbooks.com User , 20 years ago
Tupac's book of poetry is by far the best book I have ever read and I have read many a books in my life. Tupac's poetry will move even the most cold hearted human being. Any one who's down and out and is looking for inspiration and hope for the future should read Tupac's poems. They are a collection of poems about his life but they are also poems that have a message in them and often that message is that tomorrow will be a brighter day. I never even knew Tupac wrote poetry untill everyone started talking about this book and when I finished reading it I cried cause I finally understood why he is so loved by so many millions of people. I went to SOuth AFrica summer of 2000 and people there were feeling Tupac too. There were posters of him in stores and messages of his name and legacy spray painted on walls everywhere. Tupac wasn't just an American hero and leader, he was the light that shone across the globe. Reading Tupac's book of poetry is like reading his soul and feeling his prescence with you. I would recommend this book to anyone. And for all you people out there who are over analyzing his poems and saying they aren't up to poetic standards or whatever, you need to open your mind and realize that poetry is poetry no matter what form it's in. The only thing is that people interpret it differently. I always have been and 4-ever will be one of tupac's # 1 fan.

See The World Through The Eyes of a Great Man

Published by Thriftbooks.com User , 21 years ago
"The Rose That Grew From Concrete" is an amazing collection of poetry by Tupac Shukur. The poems let you go deep in his mind and see a side of Tupac that most people have never seen. As you read his poems you start to realize how he truly feels and what messages he wants to get across. You also see the pain and obstacles in his life that he had to overcome. Some people listen to Tupac's music and just hear the negative and the cussing. Not understanding that you have to know the negative to see and understand the positive. Some people see Tupac's music as a bad influence, because they don't listen to all the words to get the real message. This collection of poems is a great way to understand Tupac's life and to receive his true message, to end crime and to stop the hate. This collection of poems has had a great influence on my life and the way I look at the world. I think that everyone who reads this book can relate to Tupac in some way and I would recommend this book to anyone who is a fan of poetry about life and of course to anyone who loves Tupac.

all eyes on him

Published by Thriftbooks.com User , 21 years ago
The Rose that Grew from Concrete by Tupac Amaru Shakur, is made up of 100 poems written by Tupac at the age of 19 before his fame, before getting shot five times and before going to jail for a crime many believe he never commited. This book shows the true Tupac. The sweet Tupac that was pure and never did anything but simply tell the truth. His poems show his honesty. They reveal his true intentions and the beliefs held so stronly in his passionate heart. A preface written by Afeni Shakur, Tupac's mother, starts off the book followed by Nikki Giovanni's foreword and Leila Steinburg's heart-breaking introduction. Steinburg, Tupac's first professional manager and adult friend, shares her treasured experience of meeting Tupac. She is responsible for releasing these poems to the public. Her introduction alone, is sure to leave readers drowning in tears and, if not already, in awe of Tupac. The first poem in the book, "The Rose that Grew from Concrete," is about how Tupac learned to strive for his goals against all of the obstacles in his life that tried bringing him down. "Sometimes I Cry" and "Life Through my Eyes" explain how alone Tupac felt and show his struggles through poverty. In other poems he talks about love, racism, liberty, heartaches and goals. Readers will be able to identify with at least one poem in this book if not all of them. The book is almost like a guide that can make a person feel better and be referred to whenever someone feels alone, lost or confused. It is as though Tupac reached into his hear and brought all his feelings out onto paper. Only great writers are able to express how they really feel and are not scared to speak the truth. But as Giovanni says in her foreword, "I guess it will always be the case that when someone brings a new idea or, mosre accuratley, a truthful idea there will alway be those people who are wrong, who try to shut the truth and daring down." In his poems he talks about real issues and the ultimate truth of life. But since so many do not want to admit Tupac, the young black rapper who rose above poverty and the streets, is actually right, they make up ignorant excuses such as "they are always cursing" and "profane language is bad." Since this book is free of any profane language, maybe now people who were ready with excuses before, will realize that they have no reasons to hide from the truth Tupac shows. They will realize they have no reason to make Tupac seem low just to put him down. Readers who always thought Tupac was deep, will be shocked to see how deep he really was and still is. Tupac's 12 recorded landmark albums and six major motion pictures are still here to remember him by, and now his collection of poems have been released to the public to remember Tupac's beautiful face and precious thoughts as well. Hopefully, readers will realize that the point of reading this book is to understand Tupac and see that was no

TUPAC IS THE MAN

Published by Thriftbooks.com User , 21 years ago
AS I WAS READING THIS I FOUND MYSELF LAUGHING, CRYING, MAD, SMILING AND MOST OF ALL UNDERSTANDING LIKE TUPAC SAY IN 'SOMETIMES I CRY' THE WORLD ESPECIALLY THE MEDIA DIDN'T STOP TO THINK THAT HE WAS A MAN THAT LIVES AND BREATHS LIKE THE REST OF US HE WAS A TRUE ARTIST BUT FIRST HE WAS A MAN AND NO ONE TOOK INTO CONSIDERATION THAT HE CRYS TOO. THIS BOOKS SHOWS PEOPLE A SIDE OF TUPAC THAT THE MEDIA CHOSE NEVER TO AIR. THEY WERE TO BUSY WORRY ABOUT HIS RAP SHEET. SO TO TUPAC WHERE EVER YOU MAYBE KEEP YA HEAD UP BECAUSE YOU STILL HAVE TRUE FANS THAT KNOWS THE REAL PAC.

The man was a GENIUS!

Published by Thriftbooks.com User , 21 years ago
Anyone who has read this book certainly knows that Tupac was certainly a genius! The man wrote with such raw talent & his poems were so real & beautiful. Some of them made me cry. He was probably the best poet/rapper of our time. The man was human & if you read this book, you'll know that he love, cryed, wanted, needed, & hurt like any human. People didn't know how creative & trouble Tupac was. People think because he was in the rap game that he doesn't have a positive message or talent. The man was a GREAT writer & he wrote about his life as a Thug, & he WAS a thug & he knows the life. But Tupac wanted to rid the world of violence & racism, & if you read his work & listen to his music, you'll notice this. He was true & kept it all real! Unlike most rappers these days. He & Kurt Cobain were the only REAL, RAW talents in the 90's & it's sad they're not with us anymore. They were hear to spread a message, & I hope everyone understands it. RIP Tupac, I LUV you, you were 1 in a 1,000,000!
Copyright © 2020 Thriftbooks.com Terms of Use | Privacy Policy | Do Not Sell My Personal Information | Accessibility Statement
ThriftBooks® and the ThriftBooks® logo are registered trademarks of Thrift Books Global, LLC