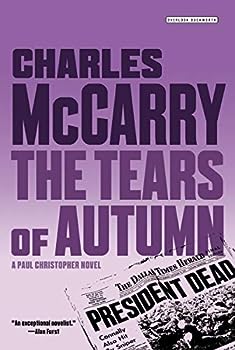 (Book #2 in the Paul Christopher Series)

This description may be from another edition of this product. "As soon as he began publishing fiction more than three decades ago, Charles McCarry was recognized as a spy novelist of uncommon gifts" wrote Charles Trueheart in The Washington Post. Tears of...

Who shot JFK? It's obvious!

Published by Thriftbooks.com User , 15 years ago
McCarry crafts a more plausible Kennedy assassination theory than most conspiracy devotees. Kennedy countenances (at a minimum) the assassinations of Ngo Dinh Diem and his brother on 1 November 1963 (so says the book; in reality the date was 2 November). Three weeks later, JFK is assassinated in Dallas. US agent Paul Christopher concludes that the Vietnamese did it. He quits the agency and sets out to prove it. The tale sprawls across 4 continents with rapid pacing as he chases down the truth. The book's interesting characters are mostly believable, at once familiar yet not completely typecast. Christopher is the expert and honest US agent. David Patchens is the honest-broker spy chief. Foley is the JFK worshipper and political operator. The Truong toc is the ancestral head of Diem's family (OK, not so familiar, but intriguing). Luong plays Christopher's trusted agent (guess what happens to him!). And there's a Cuban agent, a Mafia don, a Vietnamese fortune-teller, and more. Molly, Christopher's obligatory love interest, provides important motivation, but is otherwise uninspired. The book gives readers a peek into Vietnamese culture that is quite interesting. The book also suggests that if the American people had been told the connection between the assassinations that support for the war, not yet fully under way, would have dried up overnight. Highly recommended for fans of the spy genre.

Published by Thriftbooks.com User , 16 years ago
This book was out of print just a short while after it was originally published in 1974. The author, who currently enjoys a bit of a cult status, was an unknown at the time and this book slipped under the radar screen. But with his popularity growing ever stronger with each of his books, many of which now are out of print, the publisher "Overlook" has recently republished this book , now available in hardback for all McCarry fans. This is my first McCarry novel, but it will not be my last. McCarry tackles the Kennedy assassination in this his first book. I was a bit reluctant at first to read this book because I was frankly tired of all the silly conspiracy theories revolving around Kennedy's assassination. I think that the lone crazy assassin theory has been largely vindicated. I am tired of the ridiculous grassy knoll Oliver Stone nonsense. These theories held a certain fascination for me when I was much younger, but no more. This book however approaches the assassination from an entirely different perspective. I won't give away the plot line by discussing McCarry's theory, but suffice it to say, he does not insult our intelligence. This book is a very intelligent, elegant, and cleverly written story about the assassination and the world of espionage. His story and his characters make sense. He does not stretch credulity to the breaking point. I'm not saying that I endorse the theory of this book only that it is plausible. And that's what makes for such an interesting read. Paul Christopher, the protagonist, David Patchen, his Harvard college roommate and now his supervisor, Tom Webster, his case officer, Tom's wife Sybille Webster, and Paul's girlfriend Molly are all immensely likable and believable characters who, no doubt, we will hear from again in later novels. If you enjoy historical fiction and have any interest in Vietnam, the Kennedy assassination, and the inner workings of the CIA during this period then you will thoroughly enjoy this very good first effort by a fine writer. P.J. O'Rourke has called McCarry the "absolute best thriller writer alive." This is very high praise and in this case well deserved praise.

Published by Thriftbooks.com User , 16 years ago
For its type, this book is almost perfect. Long out of print, it has now been reissued by a small publisher. McCarry wrote a number of espionage thrillers utilizing many of the same characters in The Tears of Autumn, but this book and The Secret Lovers are by far the best of McCarry's books. The ingenious plot is an unusually clever conspiracy theory based on the Kennedy assasination. The quality of writing and characterization are excellent. This book is just a bit below the level of LeCarre's best novels and on par with the best of Alan Furst's books. I hope the same publisher is bringing out The Secret Lovers.

Don't pass this one by

Published by Thriftbooks.com User , 17 years ago
I also stumbled across The Tears of Autumn a long time ago, and have never forgotten it. I went on to read and enjoy a number of McCarry's novels, particularly The Last Supper and The Better Angels. But no one I've talked books with in the fifteen or so years since then has ever brought up his name. Which I find sad and weird, because Charles McCarry is up there with LeCarre and Robert Stone (not Oliver, nor strictly a thriller writer, but nonetheless). Not only is hero and narrative viewpoint Paul Christopher one of the few fictional spies as interesting as George Smiley, but the plot of Tears of Autumn is genuinely original, compelling, disturbing, thoroughly plausible--all you could ever ask from a thriller. Put it next to DeLillo's Libra and you have two utterly contradictory scenarios for what lay behind Dallas '63 that both feel true.Oh, and did I mention he could write? I mean the pages turn themselves and the world around you fades until the story ends. Then it lingers with you. He can write.Blah blah. I won't go on further because, like I say, it's been years. I only came here because I'd forgotten the exact title of "that Kennedy assassination book". But when I got here I found myself wanting to add my praise to that of the two previous reviewers and to wholeheartedly recommend it, along with the McCarry's other Paul Christopher novels, to anyone who's curious. It's well worth dipping into. Not to be missed, really, if you like good spy books (or well-constructed conspiracy theories).

Re-reading The Tears of Autumn

Published by Thriftbooks.com User , 18 years ago
I remember reading and enjoying Charles McCarry's "Tears of Autumn" many years ago. Re-reading it, I find that it quietly comes up with a very plausible theory for the Kennedy assasination. It is not the typical spy novel--nor is Paul Christopher the typical spy. There's an intelligence and sensitivity to Christopher that James Bond lacks. The evocation of various locales--Vietnam before the war, the Congo, France, and Italy--are amazing. Christopher's friends, the Websters and Patchen, are also well-drawn. A very rewarding read. Why has this excellent novel never been made into a film, Hollywood or otherwise?
Copyright © 2020 Thriftbooks.com Terms of Use | Privacy Policy | Do Not Sell My Personal Information | Accessibility Statement
ThriftBooks® and the ThriftBooks® logo are registered trademarks of Thrift Books Global, LLC