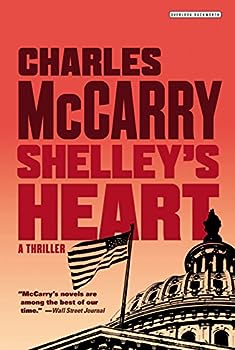 (Book #8 in the Paul Christopher Series)

This description may be from another edition of this product. An intricate and intelligent novel set in the not-too-distant future, by the author of The Miernik Dossier. The president is still celebrating his victory when it's discovered that his over-zealous...

Published by Thriftbooks.com User , 12 years ago
Shelley's Heart is spectacular. Charles McCarry's many other novels are uniformly excellent, but Shelley's Heart stands out. The suspense builds and I couldn't put the book down, particularly as the "good guys" (if you're of moderate or conservative political views) finally turned the tables on their conspiring opponents. I except that liberals and Ivy Leaguers won't like the premise of the book, which is that ex-Yale and other prep elite graduates have penetrated all three branches of the government and maintain a secret society dedicated to the victory of Shelleyian ideals. I did have on question based on reading prior Charles McCarry books. Why and how did the Hubbards become bad guys? McCarry definitely has turned on them.

Published by Thriftbooks.com User , 12 years ago
Charles McCarrey is one of the great writers of this genre in the literary world today. This book is written with a plausible plot, good story line, great dialogue, good character development, a good ending, and with humor. What more could you ask. I believe you will enjoy this book more if you go back and read some of McCarrey's earlier works. That will help you identify the major characters and will aid in their personality identification. Has any of the earlier reviewers identified the reason his books have a lag time in their publishing in the States from when they were published in England. Yes there are large number of Deer in the District. This is American fiction. If you know anything about our politics you can identify with the plot. Get a large coffee or a large brandy (depending on the time of day) and turn to page one. Be carefull, you may not be able to put it down. The Squire

Published by Thriftbooks.com User , 12 years ago
a greatly crafted, very well-written novel full of hilarious two-liners ("Sad day, Albert.""I see you've lost your speech impediment, Mr. President"). "shelley's heart" is good enough to be read three times so far--a praise that i cannot give to many books around!

Published by Thriftbooks.com User , 15 years ago
Charles McCarry is one of the top writers of espionage, suspense/thriller fiction and most definitely in the same literary league with John LeCarre, Alan Furst, Eric Ambler and Ken Follett. McCarry's nuanced, at times poetic, writing style, his ability to create real, flesh and blood characters who will move you, and his fast-paced, taunt storylines, put him at the top of the list for craftsmanship and inventiveness. Therefore, I do not understand why McCarry's books are out of print and have been for some time. In order to read them I have had to look for used book sellers who have his novels in stock at a reasonable price - not an easy task. However, for anyone who reads this review and becomes motivated to search out "Shelly's Heart" or any of the author's other suspense thriller, I urge you to follow through. You won't be sorry - I promise. I should note that McCarry worked for the CIA many years ago, during the height of the Cold War, and the air of authenticity that permeates his books makes them all the more fascinating and absolutely riveting. His position as one of the "Old Boys," and his knowledge of "The Company" and the political goings-on in the DC Beltway add tremendously to his most original plots. I was amazed while reading "Shelly's Heart" that this book was written and published in 1995 because the novel's themes, which might have seemed extremely farfetched ten years ago, are not unbelievable at all today - especially not after the 2000 presidential election and the events of 9/11. The story opens in January 2001, the day before the presidential inauguration. Incumbent President Bedford Forrest Lockwood, a political progressive, (read liberal), learns from his worthy former opponent Franklin Mallory, a staunch conservative, that there is documented evidence of election fraud in California, Michigan and New York which brings into serious question Lockwood's right to assume office. The disputed outcome hangs on a few thousand votes in a single state. Sound familiar? A presidential impeachment is also involved in this riveting thriller, as are terrorism, dirty bombs, Muslim extremists, Washington DC politics and presidential staff machinations, of the shadiest kind, at the highest levels. Throw in lots of dark humor, terrific characters, including a newly appointed obsessive compulsive Supreme Court justice with delusions of grandeur and two androgynous lawyers, lethal beautiful blonde super women types who work for him, and you have the makings of an unputdownable story. Forgot to mention a subplot involving a Yale-based secret society a la Skull and Bones, but more subversive...I think....and a constitutional crisis. I have now read almost all of Charles McCarry's books and cannot recommend them highly enough. I have had to go out of my way, as previously mentioned, to acquire his work but am so glad I did. If you are a fan of John le Carré, Alan Furst, Eric Ambler and Ken Follett, you will certainly become a McCarry

Another Great Book By Charles McCarry

Published by Thriftbooks.com User , 23 years ago
First, Charles McCarry is truly a great American writer. Evidence his novel "The Last Supper" discussed later. Shelly's Heart was hard to put down and certainly an enjoyable political thriller that explored what could happen in a Constitutional crisis and impeachment situation. I gave Shelly's Heart a 9 only because it is hard for me to imagine any book topping the performance and range of quality of "The Last Supper" that establish Charles as a great American author. Certainly timley, considering current political events, regardless of your political pursuasion. And I didn't think McCarry particularly evidences a particular political bias in his writing either, although he does have some strong feelings about a few things. I am already a McCarry fan having read all seven or eight fiction novels he has written, (except "Bride of the Wilderness") up to now. I prefer his espionage novels from which this book draws on events and characters. McCarry considers himself an author not of a particular genera, but a general author. He has explored and written in several: espionage (what he truly knows), western/histroical and contemporary political thriller like Shelly's Heart. He is skilled at his writing craft and can be very intellectually profound and deep in his writing. (He was consistantly so in "The Last Supper.") He also writes with a great range and depth of emotion. His writing flows so well that you become completely and comfortably absorbed in the story and characters. Seldom if ever does anything appear contrived. Just like good fiction and storytelling should be. And it appears to me (having read his other boooks) that McCarry draws on his insiders knowledge as a field case officer in the CIA (his former profession) during the cold war era. McCarry writes from personal knowledge and experience. His fictionalized secret "Society of the Poet", in the seemy political backdrop of the novel is based on other real secret societies such as the Yale Russel Trust or Skull and Bones. (Anyone who knows about the history of the CIA should know about the "Skull and Bones".) Perhaps the reviewer who ranted about vast right wing conspiricy theory (to requote Hillary) was just uninformed and iliterate, as history and men are by their natures conspiratorial, witness David Humes classic "History of England". (Or maybe he is just a paranoid left wing conspiracy nut. So touchy!) But that reviewer does a disservice to readers who might be mislead and persuaded to pass on an opportunity to experience a great American author. The book does bring out the sometimes conspiratorial nature of man in politics and existance and influence of secret societies but makes no real comentary thereon and is just a great story. The book does not tout any right wing conspiracy theories but simply takes an authors liberty to employ a very creative literary fictional device, "The Society of the Poet" i.e, Shelly. It becomes appearent quickly from reading
Copyright © 2020 Thriftbooks.com Terms of Use | Privacy Policy | Do Not Sell My Personal Information | Accessibility Statement
ThriftBooks® and the ThriftBooks® logo are registered trademarks of Thrift Books Global, LLC