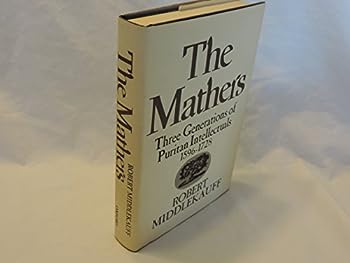 In this classic work of American religious history, Robert Middlekauff traces the evolution of Puritan thought and theology in America from its origins in New England through the early eighteenth... This description may be from another edition of this product.

Published by Thriftbooks.com User , 12 years ago
The world of Richard, Increase and Cotton Mather was so hugely different from our own that it could easily be unfathomable. The principal dissimilarity, far more profound that the political, technological or demographic differences, was the intense religious focus, including a strong belief that the day of judgment was very close, and the predominance of personal struggles with sinfulness, prayer, the need for a rebirth in Christ and the path to the glory of the afterlife. The commercial and tangible motivations that we assume predominant in human behavior were of secondary importance. The brilliance of this book is the way in which it illuminates this world through his intimate and largely sympathetic portrait of three generations of intellectually powerful, eloquent and truly God fearing men. Their own voluminous writings are the bedrock of his story but his own narrative has a clarity and pace that brings the three Mather men and their world alive.

Published by Thriftbooks.com User , 15 years ago
This very well written book is a detailed study of the thought and psychology of 3 prominent New England Puritan clergymen, Richard, Increase, and Cotton Mather. Middlekauf uses a careful study of their life and thought to illuminate the nature and historical evolution of New England Puritan thought from the founding of the Massachusetts Bay Colony to the early 18th century. Father, son, and grandson, each of the Mathers is used by Middlekauf to explore the nature of Puritan thought and its adaptation to the different circumstances faced by each generation of Puritan divines. Based on a careful reading of the enormous amount of writings left behind by these remarkably productive individuals, The Mathers discusses the differing approaches to Puritan religious experience, church government, state-church relations, and eschatology developed by the Mathers. Middlekauf is both thorough and sensitive in his exploration of the nature of Puritan ideology and the differing psychology of these men. He does an excellent job of relating the changes in their thinking to the differing circumstances of the Massachusetts colony. Written for scholars in American history, this book does presuppose a fair understanding of American and British history of this time but could be read very profitably in conjunction with Francis Bremer's excellent survey of the Puritan experience.
Trustpilot
Copyright © 2022 Thriftbooks.com Terms of Use | Privacy Policy | Do Not Sell My Personal Information | Accessibility Statement
ThriftBooks® and the ThriftBooks® logo are registered trademarks of Thrift Books Global, LLC