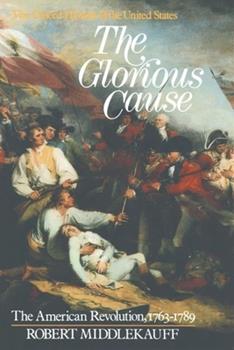 The Glorious Cause: The American Revolution, 1763-1789 (Oxford History of the United States, Vol. 3)

(Book #3 in the Oxford History of the United States Series)

The first book to appear in the illustrious Oxford History of the United States, this critically acclaimed volume--a finalist for the Pulitzer Prize--offers an unsurpassed history of the Revolutionary... This description may be from another edition of this product.

Excellent Resource, but Kindle Version Has Some Problems

Published by Thriftbooks.com User , 13 years ago
"The Glorious Cause" is an excellent secondary source on the Revolutionary Era. However, in this review I will focus on the presentation of the Kindle edition rather than the book's contents. The Kindle edition has some problems. The biggest issue is that in two places, large chunks of text appear out of order (e.g., toward the end of Chapter 21 there's a sudden break mid-sentence, followed by several pages of text that belongs at the start of Chapter 22). The other issues are ones that seem to be shared by many non-fiction Kindle books. The maps and the index are illegible. Also, while the notes are linked (a good thing), you can't page through the notes themselves. Thus, if you click on a particular note and find that it reads "ibid.," there's no easy way to access the preceding notes and find out what source "ibid." is referring to. Notwithstanding these problems, I'm delighted that Oxford has made "The Glorious Cause" available as a Kindle book. Oxford has been one of the most active Kindle publishers and should be praised for jumping in.

Published by Thriftbooks.com User , 16 years ago
For the most part, I enjoyed this one and found if very, very informative. The author is quite detailed in his writing and the book appears to have been very well researched. I did enjoy the footnoting and found the notes most helpful. Unlike other reviewers, I did find this not to be the easiest of reads. I suppose much of that was due to my lack of knowledge of English law. I also found it quite difficult, at times, to follow the numerous characters. I did find it easier one I finally caught on to the author's style. The book addresses the cause of the revolution quite well and the author is quite detailed. This work would perhaps be more appreciated by those quite interested in the politics of the situation, examined from both the American and British point of view. I did find this interesting, if somewhat boring at times. The author does repeat himself a lot. The author does assume that the reader does know something of the subject and this leads to some mad dashes for reference books, anyway it certainly did on my part. (This of course is my defect, not necessarily the authors). All in all I would highly recommend this one. I learned a lot from it, and for that I a grateful I read it.

A wonderful and full overview of the Revolutionary War

Published by Thriftbooks.com User , 16 years ago
This is a very good book on the Revolution, or The Glorious Cause. Right from the beginning you get a sense of what Middlekauff is attempting to portray as he describes in detail the major factors that led to the Declaration: debt from the Seven Years War and the taxes that were meant to help recoup that debt. His recursive style - of starting a new chapter by backtracking in order to fill the gaps that are needed in order get back to the timeframe of the previous chapter - is an amazing way to write. I haven't seen much of this style of writing in nonfiction, only in fiction by authors such as Faulkner and Morrison, and it does well in furthering the story along. The additional chapters scattered throughout that explain some of the non war aspects are very helpful and interesting to read. This is a long read, though, so prepare yourself. It doesn't help that the last 80 or so pages is about the debates at the Constitutional Convention, which is an extremely dry read that should not have been included in the first place. Additionally, there is a focus on the battles fought, so if you prefer not to read about battles than this book would not be for you. All in all, Middlekauff did exactly as he set out to do - even with the Constitutional Convention chapters, since this does fall into the premise of his book - and I would recommend this book to anyone interested in the time period. For those who are also interested in the French and Indian War read Anderson's Crucible of War, which is a perfect lead in to the The Glorious Cause.

The war of "The Children of the Twice-Born"

Published by Thriftbooks.com User , 20 years ago
The inaugural volume of the highly honored but still unfinished "Oxford History Of The United States" series is "The Glorious Cause: The American Revolution, 1763-1789," a superbly written, scholarly, and highly literate account of the America's War for Independence. Written by Robert L. Middlekauff, Professor of History... this is the finest account of the Revolutionary War I've found to date... even better than Benson Bobrick's "Angel in the Whirlwind," which I've already reviewed. "The Glorious Cause" is a comprehensive account of the American Revolution designed to give readers a well rounded overview of not only the causes of the war, but also of how the war was fought. The book succeeds admirably at its task. After finishing "The Glorious Cause," I felt a much greater appreciation for the men and women whose struggle for freedom brought forth on the North American continent a new and independent nation - the United States of America. "The Glorious Cause" begins by examining the causes of the American Revolution. In one of the book's earliest chapters, entitled "The Children of the Twice Born," Middlekauff carefully lays out his closely reasoned and well argued thesis: that the seeds of revolution were planted long before the war was actually fought. Those seeds, embodied in the economic, social, political, and religious fabric of American society, made the evolution to democracy on the North American continent almost inevitable. The earliest settlers came to the New World because of their disenchantment with authoritarian English laws and what they viewed as centralized, overly ritualistic, dogmatic Anglican religion. When the settlers arrived with their ideals of political and congregationalist religious democracy, they found land cheap and plentiful. Whereas only about 20 percent of all Englishmen were landowners, and hence were eligible to participate in England's parliamentary democracy, over 50 percent of American colonists owned land and therefore could take part in colonial parliamentary government. The result: provincial representative assemblies tended to do the bidding of their constituents rather than the royal governors. After the Seven Years' War, tension between American political and economic interests and the interests of the British government was exacerbated by Parliament's intent to restore Britsh prerogatives in America. Tension was bound to lead to conflict, and that conflict wasn't long in coming. The American colonies were left pretty much to their own economic and political devices during the Seven Years' War, so long as they provided support for Britain's war against the French. The colonists bore the brunt of the fighting during the war against the French in North America; at war's end, they expected to be permitted to return to some semblance of self-government. It was not to be, however. Under Britain's new King and a Parliament with a new-found awareness of the American colonies' potential to enrich their coloni

Published by Thriftbooks.com User , 24 years ago
This second volume of "The Oxford History of the United States" provides an objective, sober look at the American Revolution without denying its role in world history as a truly "glorious cause". In demythologizing the war as we saw it through grade-school eyes, author Robert Middlekauff profiles our Revolutionary forebears as they really were: men of courage and vision who were not without their flaws. Likewise, the British redcoats we loved to hate may not have been entirely hostile or unsympathetic to the legitimate grievances of the Americans, yet their often condescending view of the colonists and an incompetent colonial policy gave America no option but to rebel in the end. The book's well-written accounts of the Revolution's major battles will increase the reader's understanding of political, logistical, and strategic problems on both sides which contributed to the conflict's drawn-out, six-year duration. Unlike other histories of the war which end with the Treaty of Paris in 1783, Mr. Middlekauff offers an absorbing narrative of the drafting of the Constitution in 1787 and its subsequent ratification by the states. After reading "The Glorious Cause", I can better appreciate the sacrifices made over 200 years ago by a determined people who, in defending divinely-established rights and liberties for themselves and their posterity, defended virtue and morality as well.
Trustpilot
Copyright © 2022 Thriftbooks.com Terms of Use | Privacy Policy | Do Not Sell My Personal Information | Accessibility Statement
ThriftBooks® and the ThriftBooks® logo are registered trademarks of Thrift Books Global, LLC