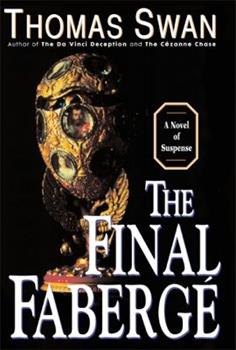 The Final Faberge: A Personal Handbook for Recovering from Affairs

Rumor has it that a mysterious Faberge Egg disappeared in the days just before the Russian Revolution. It's up to Scotland Yard art crime detective Jack Oxby to solve the mystery and find the infamous art treasure. Trouble is, whoever attempts to find the Faberge Egg turns up dead. No matter for Oxby, the fearless hero of Thomas Swan's two previous art crime thrillers, The Da Vinci Deception and The Cezanne Chase. The Final Faberge is a page-turning...

Published by Thriftbooks.com User , 21 years ago
No question, The Final Faberge is Thomas Swan's best in his Jack Oxby series. The storyline moves from the dramatic assasination of Rasputin, to today, following the change in ownership of the last Imperial Egg designed and produced by Peter Carl Faberge's workshops. The settings are authentic, particularly the scenes set in St. Petersburg and Uzbekistan.

Enlightens as it entertains

Published by Thriftbooks.com User , 23 years ago
In 1916 Petrograd, Rasputin picks up the Imperial Easter Egg he commissioned master artisan Peter Carl Faberge to create. Rasputin loves the work and dubs it "The Egg of Eternal Blessing." He places a near perfect sapphire and diamond inside the egg. Rasputin intends to give the Faberge egg as a present to Czarina Alexandra Feodorovna. That very night, friends kill the enigmatic monk. Nikolai Karsalov stealthily steals the egg.In the 1990's, Mike Carson owns several car dealerships. An old family friend from Russia, Sasha Akimov visits Mike and informs him how his father lost Rasputin,s egg in a rigged poker game around the time of the Kennedy assassination. When someone murders Akimov, NYPD detective Alex Tobias investigates. Meanwhile, New Scotland Yard Inspector Jack Oxby takes a leave of absence to accept a job to find the missing Faberge. Jack and Alex meet and connect murder with the egg.THE FINAL FABERGE, the third entry in the Oxby art mysteries, is a wonderful tale that takes readers across the globe in a non-stop story line. The intertwining of the two cases strengthens the plot especially when Mr. New York and Mr. London join forces. As with THE DA VINCI DECEPTION and THE CEZANNE CHASE, Thomas Swan instills this tale with warm characters, deadly villains, and a fabulous art mystery that will entertain sub-genre readers.Harriet Klausner
Trustpilot
Copyright © 2022 Thriftbooks.com Terms of Use | Privacy Policy | Do Not Sell My Personal Information | Cookie Preferences | Accessibility Statement
ThriftBooks® and the ThriftBooks® logo are registered trademarks of Thrift Books Global, LLC