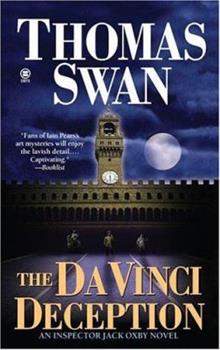 When an original Leonardo da Vinci folio is discovered missing from Windsor Castle, and a conspiracy to falsify these lost manuscripts is discovered, Scotland Yard's Inspector Jack Oxby of the Art and Antiques Squad must travel from London to New York and northern Italy to uncover a trail of betrayal, blackmail, and murder.

Published by Thriftbooks.com User , 14 years ago
I have to say I actually enjoyed this book. Multi millionaire, Jonas Kalem puts together an art fraud team to try to create an authentic-looking Da Vinci sketch of the Mona Lisa. There's lots of action, a few twists and turns and some great settings. I do admit the author got a few facts wrong, but the story itself is interesting enough to forgive him for that. This is FICTION, people. An author is free to create his own world as he sees it. This is a fun read and I found myself really rooting for a couple of the members of the gang--totally innocent Eleanor Shepard and the paroled counterfeither, Curtis Stiehl; as well as the main detective, Walter Deats. Won't spoil it by telling you why. I do agree it shouldn't be called a "Jack Oxby" novel. He only makes a couple of apperances in the whole thing. And it's not really a mystery since we're informed of everything as we go along. It was much more about Walter Deats and I rather liked him. A very sympathetic character. Would rather read more about him than the rather flamboyant Oxby.

Published by Thriftbooks.com User , 21 years ago
I loved this book! Great story, great characters, andthe pacing of it just never lets up. Furthermoreit avoids the nauseating politically correct propagandajunk that mars so many mysteries and action storiesin today's world; ones where women perform featsof daring physical, psychological, and intellectual stunts(while the men waffle around like flawed, clueless bozos)that in real life just don't happen. If you want deep characterizations andallthat, go back and reread Shakespeare. This bookplays out almost like a very satisfying, high quality movie.I'd definitely be willing to seek out and read other works by this author inthefuture. Highly recommended.

Published by Thriftbooks.com User , 23 years ago
This is the second Thomas Swan novel taking place in the art world. A set of theives set up a complex deception involving Leonardo Da Vinci, as the title implies. Jack Oxby is not very prominent in this book, but other characters move the book along. The chapters are short, which keeps you moving. I found it difficult to put down. I disagree with the review here stating that character developement is weak; I have a feel for each one of them. Surprises abound and it is a good view into the art world; as someone who works in it, it is not nearly as idealized as the museums would make you think! Good job Mr. Swan...please send us more!

Published by Thriftbooks.com User , 24 years ago
This is Thomas Swan's inaugural art crime and introduces Jack Oxby from Scotland Yard's Art & Antiques Squad. It is, as was Swan's The Cezanne Chase, a Book of the Month Club Featured Selection. Fran Wood wrote in The Newark Star Ledger, "While Swan provides rather more detail on DaVinci and the mateiral used by the Renaissance artists than most mystery fans will care to wade through, there is plenty of action, and Swan masterfully pulls together the various threads of the adventure in a breakneck climax." Its a great read and highly recommended.
Trustpilot
Copyright © 2022 Thriftbooks.com Terms of Use | Privacy Policy | Do Not Sell My Personal Information | Cookie Preferences | Accessibility Statement
ThriftBooks® and the ThriftBooks® logo are registered trademarks of Thrift Books Global, LLC