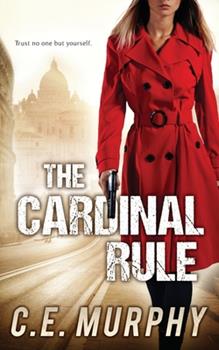 (Book #1 in the The Strongbox Chronicles Series)

by Cate Dermody and C.E. Murphy

When CIA Agent Alisha MacAleer's cover is blown by ex-lover Frank Reichart, she's forced into a spy game that draws a curtain back on a world she never even suspected existed... The clandestine Sicarii have hired Brandon Parker, the brilliant, estranged son of Alisha's handler, to develop an artificial intelligence capable of enforcing their divine right to rule. No one, not even Brandon's father, imagines he can do it--not until Alisha herself faces...

Published by Thriftbooks.com User , 16 years ago
I mostly only read books in the science fiction/fantasy genre, but I picked up The Cardinal Rule because Dermody is another name used by writer C.E. Murphy, author of Urban Shaman. I'm still waiting on Urban Shaman, but judging by The Cardinal Rule, when I get it I will really enjoy it. Cardinal is a spy thriller - sort of. Those looking for espionage a la Robert Ludlum are doomed to be disappointed, but I wasn't. It's the most fun I've had reading a non-SFF novel in I don't-know-how-long, a blend of Bond-style hecticness with something of the sensibility of TV's Alias (a program I'd like if they cut out the mystical-Renaissance crap and actually added some realism) and a plot that crosses over into what looks like SF territory at times. It's helped by the fact that it takes itself seriously, but not too seriously, and the heroine, Alisha MacAleer, is just pure fun to read. Absolutely pure fun.

Published by Thriftbooks.com User , 16 years ago
First in a new series. CIA Agent Alisha MacAleer's new assignment isn't going well. She's immediately "made" and barely escapes with her life. Her ex-fiancee shows up working as an agent for the Russians and her target that she is supposed to be investigating may or may not be one of the good guys. No one seems to be whom they seem and the only thing Alisha is sure of is that she can't trust anyone. This is a series I'm really looking forward to seeing more of. Hopefully Ms. Dermody writes fast.

Published by Thriftbooks.com User , 16 years ago
CIA Agent Alisha MacAleer hates her current assignment. Her handler and mentor Greg Parker informed her that she must go undercover looking into the activities of an American scientist working at a base in Kazakhstani. No matter what she does she knows she will hurt someone dear to her as the target is Brandon Parker, son of her mentor. Still she does the job as the professional she is seeking to learn whether he is developing a robotic soldier and if yes how far along has he come. However, the investigation falls apart from the beginning as Alisha is outed immediately. Not sure who gave her away, she flees trusting no one; not even those from her agency. Professionals follow her with plans to silence her about what little she has learned. This thrilling suspense will leave the audience breathless, but also like the heroine bewildered with who is doing what to whom except that everyone seems to be after Alisha. Adding to her confusion (but in this case not the audience) she has no idea what she learned that has made her a target. Readers will commiserate with Alisha as everyone she meets is a potentially deadly stranger especially the wild card Riechart, whom she is very attracted to even though is a freelancer. Harriet Klausner
Trustpilot
Copyright © 2022 Thriftbooks.com Terms of Use | Privacy Policy | Do Not Sell or Share My Personal Information | Accessibility Statement
ThriftBooks® and the ThriftBooks® logo are registered trademarks of Thrift Books Global, LLC