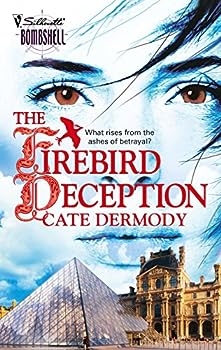 The Firebird Deception (The Strongbox Chronicles)

(Book #2 in the The Strongbox Chronicles Series)

It should have been simple. Get in, get the goods, get out. Yet what should be simple almost never was... Once more Alisha MacAleer was racing around Europe, this time searching for the black box from... This description may be from another edition of this product.

Published by Thriftbooks.com User , 16 years ago
I recently read The Firebird Deception and enjoyed it thoroughly. In my opinion Cate Dermody creates an extremely dynamic character with Alisha. She has all the sensability of an average woman but she has the dangerous and edgy traits which makes her quite unique. It is basically Tomb Raider meets CIA agent. Like Tomb Raider Alisha goes on dangerous missions while having fun and being an emotional woman all at the same time. She meets and works with varying shades of men from dark and sexy to the ones who are tricked by loyalties. However unlike Tomb Raider she doesn't explore lost civilizations hunting or protecting treasure she deals with top government secrets involving out of the way organizations. She travels around Europe following orders however when she is unable to trust the higher ranking officials she is not afraid to go out on a limb and get answers to the questions she seeks. In this way she finally comes to terms with her past and is able to move on with her future.

Published by Thriftbooks.com User , 16 years ago
CIA Agent Alisha MacAleer is in the mountains of Spain seeking the black box from an American military spycraft plane shot down by an earth-to-sky missile. If by some chance the plane is recognizable she is to take appropriate action to insure no one knows this was a spycraft. Alisha has always been a dedicated agent and patriot, but her mission causes her some major doubts as her country should not be spying on its allies. Adding to her trepidations is the realization too many people seem to know her whereabouts and her mission for something so top secret. Someone is giving her away, but whom. Could it be her former lover and espionage mercenary Frank Reichart who seems the likely one as he probably found the right bidder or perhaps even her so called partner on this clandestine mission Brandon Parker who she begins to believe is a double agent working for some clandestine take over the world group? The simple answer is she has gone paranoid, but it is too dangerous to accept that solution as she must accomplish the assignment to insure her country is not embarrassed. THE FIREBIRD DECEPTION is an exciting espionage thriller with the emphasis on action. Alisha is a fascinating protagonist whose paranoia is intriguing but her consistent switching on who to not trust can become irritating as the audience tired of more flips than Kerry wants to shout TRUST NO ONE. Still Cate Dermody provides an action-packed spy thriller that never slows down from the first climb in the Spanish mountainside to the treks across Europe until the final triangular confrontation. Harriet Klausner
Trustpilot
Copyright © 2022 Thriftbooks.com Terms of Use | Privacy Policy | Do Not Sell or Share My Personal Information | Accessibility Statement
ThriftBooks® and the ThriftBooks® logo are registered trademarks of Thrift Books Global, LLC