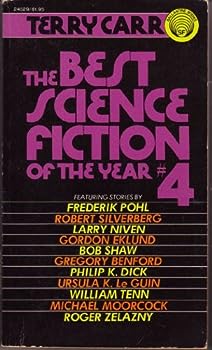 The Best Science Fiction of the Year #4

July 1975. Stated First Printing. Ballantine Books, Inc., 304 pages. 10oz (Black Paperback with purple, yellow & orange lettering). The Best Science Fiction of the Year #4: Featuring Stories by... This description may be from another edition of this product.

Published by Thriftbooks.com User , 13 years ago
Not as good as some of the others, this edition, at only 3.60. This is from 1979: Part of Carr's comments in his intro ".. the fact that science fiction's real strength is its ability to see out of the present, past the concerns of the moment..and the nearly limitless possibliites that lie in our future. The idea that a "view from tomorrow" should always be directed back to today is not only; silly it also has led to an increasing myopia in science fiction's vision...Science fiction readers are intelligent people; they don't need to be lectured at about things that are obvious already." Terry Carr 04 : We Purchased People - Frederik Pohl Terry Carr 04 : Pale Roses - Michael Moorcock Terry Carr 04 : The Hole Man - Larry Niven Terry Carr 04 : Born with the Dead - Robert Silverberg Terry Carr 04 : The Author of the Acacia Seeds and Other Extracts from the Journal of the Association of Therolinguistics - Ursula K. Le Guin Terry Carr 04 : Dark Icarus - Bob Shaw Terry Carr 04 : A Little Something for Us Tempunauts - Philip K. Dick Terry Carr 04 : On Venus Have We Got a Rabbi - William Tenn Terry Carr 04 : The Engine at Heartspring's Center - Roger Zelazny Terry Carr 04 : If the Stars Are Gods - Gordon Eklund and Gregory Benford Alien sex control destruction. 4 out of 5 Werther, a bit down, looks for something new. 3 out of 5 Quantum black hole is ridiculous overkill. 3.5 out of 5 Ex-life wife pursuit not so interesting when examined cold. 4 out of 5 Lower order communication. 3.5 out of 5 Hawk cop Fireman takedown. 4 out of 5 Time to avoid own deaths. 4 out of 5 Space Age Jew certainly can be blue. 2.5 out of 5 Bork Bork borked. 3 out of 5 No longer the good Sun at all. 4 out of 5
Copyright © 2022 Thriftbooks.com Terms of Use | Privacy Policy | Do Not Sell My Personal Information | Accessibility Statement
ThriftBooks® and the ThriftBooks® logo are registered trademarks of Thrift Books Global, LLC