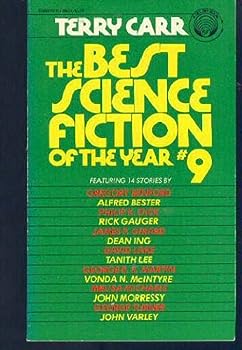 The Best Science Fiction of the Year, No. 9

Stories by: Alfred Bester, Rick Gauger, Dean Ing, Tanith Lee, Vonda N. McIntyre, John Morressy, John Varley, and many more. This description may be from another edition of this product.

Published by Thriftbooks.com User , 13 years ago
A very fine example of the series, averaging 3.89. No less than two Australian stories here. Carr also expounds upon anthologies in general, suggesting they are good for finding new writers (not just his, and no argument here). He also talks about anthology construction - saying the first or lead story should be a strong one, as should the last (or first at least the biggest name author). Stuff should be spaced out by length and by story type and theme, as well, same with amusing or depressing stories. Charles N. Brown's SF roundup is pretty savage, in general, saying there were a few good fantasy novels I've never heard of, some good collections, but Clarke, Sheffield, Zebrowski, Herbert etc., not so good. Bit grumpy when he did this, perhaps. Third book of a fantasy trilogy or The Fountains Of Paradise? Not much of a hard choice there. Not that we care about fantasy trilogies at all, in a best SF of the year book to start with. There's a short other stories recommended list by the editor, too. Terry Carr 09 : Galatea Galante The Perfect Popsy - Alfred Bester Terry Carr 09 : Sandkings - George R. R. Martin Terry Carr 09 : Time Shards - Gregory Benford Terry Carr 09 : In the Country of the Blind No One Can See - Melisa Michaels Terry Carr 09 : Re-deem the Time - David J. Lake Terry Carr 09 : Down and Out on Ellfive Prime - Dean Ing Terry Carr 09 : The Exit Door Leads In - Philip K. Dick Terry Carr 09 : Options - John Varley Terry Carr 09 : In Trophonius's Cave - James P. Girard Terry Carr 09 : Fireflood - Vonda N. McIntyre Terry Carr 09 : No More Pencils No More Books - John Morressy Terry Carr 09 : The Vacuum-Packed Picnic - Rick Gauger Terry Carr 09 : The Thaw - Tanith Lee Terry Carr 09 : In a Petri Dish Upstairs - George Turner Mistress maker random walk acid touch. 4 out of 5 Feed your pets properly, fool. 4 out of 5 Potty past talk. 3.5 out of 5 No twin killing, whatever the zygote. 4 out of 5 Space race wimpout = backwards people. 4.5 out of 5 Drifters and grifters dragooned due to space station rain problem. 3.5 out of 5 Show some backbone, bibleboy. 4 out of 5 Transgender tryouts. 4.5 out of 5 Past message sacrifice. 3 out of 5 Hybrid distaste. 3.5 out of 5 Corporal punishment necessities. 4 out of 5 Skinny walk home. 4 out of 5 Greatetcgrannicicle now bloodnut alien people eater 4 out of 5 Orbital-Earthworm relationships and differences with brainwashing meltdown muscular mayhem. 4 out of 5
Copyright © 2022 Thriftbooks.com Terms of Use | Privacy Policy | Do Not Sell My Personal Information | Accessibility Statement
ThriftBooks® and the ThriftBooks® logo are registered trademarks of Thrift Books Global, LLC