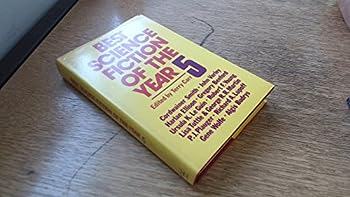 The Best Science Fiction of the Year, No 6

Every year, critics hail Terry Carr's annual anthology as The Best of the Bests, and this year is no exception with stories like these: I See You - Damon Knight; The Phantom of Kansas - John Varley;... This description may be from another edition of this product.

Published by Thriftbooks.com User , 13 years ago
In 1976, here is what Terry Carr has to say: "The short story is a dying art-form everywhere but in science fiction and the reasons are worth considering." Comparisons to tv and movies etc. and goes on further "I have a theory that short stories don't thrive today because people don't like to think...it has been said a good short story is essentially the pivotal chapter of a novel..inviting readers to extrapolate the background and aftermath for themselves...people prefer to have their thinking done for them by the authors...want writers to tell them what Maria said to her lover when she found out he was her uncle..Who wants to speculate?--We live in a world that worships data. Well, maybe that's why the science-fiction short story isn't dying: because sf is a genre based on speculation." He also has another theory: "I suspect most sciene-fiction readers being by reading novels, and only later do they graduate to novelettes and short stories. The shorter form is more demanding." His thoughts aside, this is a fine collection, with a class start and finish, let down a bit by the middle, with the absolute nadir the overly tedious Christopher Priest story that could certainly have benefited from being shorter. There is a brief recommended reading list, and several page overview of the science fiction year by Charles N. Brown. Terry Carr 06 : I See You - Damon Knight Terry Carr 06 : The Phantom of Kansas - John Varley Terry Carr 06 : Seeing - Harlan Ellison Terry Carr 06 : The Death of Princes - Fritz Leiber Terry Carr 06 : The Psychologist Who Wouldn't Do Awful Things to Rats - James Tiptree Jr. Terry Carr 06 : The Eyeflash Miracles - Gene Wolfe Terry Carr 06 : An Infinite Summer - Christopher Priest Terry Carr 06 : The Highest Dive - Jack Williamson Terry Carr 06 : Meathouse Man - George R. R. Martin Terry Carr 06 : Custer's Last Jump - Steven Utley and Howard Waldrop Terry Carr 06 : The Bicentennial Man - Isaac Asimov A switch to the left, a switch to the right, let's watch the time warp again. Either with voyeuristic or revolutionary intention. Or whatever. 4 out of 5 Recording robbed revenant revenge Rat. 4 out of 5 Mutant eye theft breakdown. 3.5 out of 5 Comet info feed. 3.5 out of 5 People experiments maybe more fun. 3.5 out of 5 Blind boy, no threat, maybe. 3 out of 5 Freeze freezer. 3 out of 5 Tornado topology opportunity slowdown splashdown. 3.5 out of 5 Dead love handles. 4 out of 5 Dirigible Big Horn. 4 out of 5 Robot evolution legal test case. 4 out of 5 4.5 out of 5
Copyright © 2022 Thriftbooks.com Terms of Use | Privacy Policy | Do Not Sell My Personal Information | Accessibility Statement
ThriftBooks® and the ThriftBooks® logo are registered trademarks of Thrift Books Global, LLC