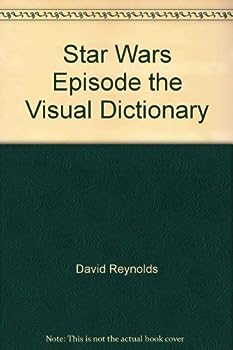 (Book #1 in the Star Wars: The Visual Dictionary Series)

The Visual Dictionary is an essential guide to Star Wars. DK's renowned Eyewitness style brings the characters, costumes, droids, and gadgetry of the Star Wars universe to life in astonishing visual... This description may be from another edition of this product.

Published by Nancy , 25 days ago
Myriad of characters and critters as well as weapons and paraphernalia

Published by Thriftbooks.com User , 17 years ago
Great pictures and information about characters.

A long time ago in a galaxy far far away....

Published by Thriftbooks.com User , 17 years ago
STAR WARS the Visual Dictionary! This great book features some amazing facts about Star Wars Episodes IV, V, and VI and I love it! It has details about all of the major characters and a lot of minor characters ranging form Luke Skywalker, to Princess Leia Organa, to the Rancor, to the slave girl in Jabba's Palace. This book has info on the Stormtroopers, C-3PO, Yoda, and many more. YOU WILL LOVE IT!

You'll pick it up again and again

Published by Thriftbooks.com User , 22 years ago
My son the nine-year-old spendthrift actually saved up for this book, and I must say it's worth every penny. It's filled with beat-up, blaster-lased equipment, cool musical instruments, weird details you've wondered about but thought you were too old to ask. When my son first got it, we fought over it! It's also worth the money because it quickly becomes clear to the careful observer that much of the gear herein is reconditioned everyday stuff from the banal 20th Century. A musical instrument in the Cantina band, for instance, contains brass garden sprinkler nozzles! Spotting these details is what makes this book fun for us adults as well as the second generation of Jedi masters. Unreservedly recommended!

Published by Thriftbooks.com User , 23 years ago
This book was so amazing! It had everything u didnt know about starwars, things from cut scenes, backgrounds of many insignificant characters, such as chewey's age and family members. If you've always wondered how in the hell a lightsaber could work then now u can find out.... or how a droid like R2-D2 could fit all those gizmo's inside of him, that's in there too. David West Reynold's put so much thought into writing this book. It's amazing how there could be so much information about the insides of something that doesn't even exist, it was just completely thought up by a bunch of people...a definate must buy for any starwars fans... i also recommend buying INCREDIBLE CROSS-SECTIONS, which was a very similar, terrific info filled book...to the fullest!

A visual dictionary with engaging layout and information

Published by Thriftbooks.com User , 24 years ago
Star Wars the Visual Dictionary is actually more than just a dictionary. It has excellent photos from the Lucasfilm Archives including a few from scenes that were cut. In a way, this book is similar to From Star Wars to Indiana Jones: the Best of the Lucasfilm Archives, but instead of being production notes, it treats the technical objects as if they were real. Arrows point to various parts of things like Boba Fett's armour. I wonder if some of the props were enhanced for this book because there are photos of the inside mechanics of a lightsaber and a stormtrooper helmet, which wouldn't have been neccessary for the movies. The layout of the book is much like the Eyewitness series with very clear individual photos of objects instead of just a rectangular, stale layout. A lot of information is packed into theh 64 pages and as far as I can tell, nothing was left uncovered. I've got to hand it to the research team who worked on this book. I deffinitely recommend it for kids or adults.
Trustpilot
Copyright © 2022 Thriftbooks.com Terms of Use | Privacy Policy | Do Not Sell or Share My Personal Information | Accessibility Statement
ThriftBooks® and the ThriftBooks® logo are registered trademarks of Thrift Books Global, LLC