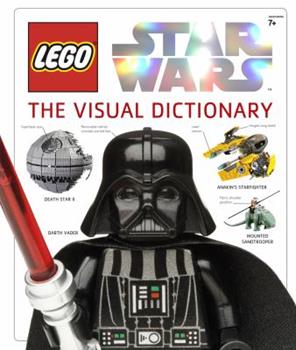 (Part of the Star Wars: The Visual Dictionary Series)

Darth Vader, Boba Fett, Yoda, Luke Skywalker, and more are brought to life with dozens of little-known facts and hundreds of photos, as are accessories, vehicles, weapons, and even the Death Star. Learn about the history, manufacture, and construction of the minifigures of the "Star Wars" galaxy, and come away a LEGO Jedi Master.

Published by tonya fedders , 1 year ago
My son ordered this book with the impression the mini figure in the photo, that normally comes with the book, would be included. I did not see in the listing that the mini figure was not included.

Disappointed by the shape it was in

Published by Rae , 1 year ago
I ordered the 'very good' condition and the front cover is ripped and has gum on it. There are weird oil stains on some of the pages. It was also missing the mini figure, im not too upset about that as its not a new book. But this seems to be an 'acceptable' condition version. This is the 1st time ive had a book come in bad shape

Published by Elliott , 2 years ago
I ordered the "very good condition". I got it as a gift for my uncle, but it is sadly missing the exclusive mini figure. Other than that everything seems to be in order.

Published by Cathy Clay , 3 years ago
Was disappointed when I received it because it shows mini figure in book. When I received it it was not in book. No where in the discription of the book does it say it is not in it.

Published by Thriftbooks.com User , 13 years ago
My english is not good, but i try it. My son, 5 years old, he's a big fan of Lego Star Wars, I had bought the book for me, but I can now forget, he wants me to return the book no longer. the pictures and the layout are especially. I can only recommend the book. it's a great book at a great price.

What a great book

Published by Thriftbooks.com User , 13 years ago
For my two boys aged 7 and 9 these are prized possesions! There are great detailed photos and descriptions on all star wars lego sets. For kids that are right into star wars lego this is a must.

Published by Thriftbooks.com User , 13 years ago
I have a six year old who LOVES this book. I realize many collectors are not terribly impressed with this book, but it's geared at a younger audience - thus the "visual" dictionary. It has awesome pictures of all the star wars legos made up to this point in time. There are descriptions of the characters and buildings/ships, along with the year they were released. Admittedly, there is not a ton of descriptive information, but it's more than enough for a young star wars lego fan! Especially when less font leaves room for bigger images!

Published by Thriftbooks.com User , 13 years ago
This is a beautiful book! Title: The Visual Dictionary....of all the Lego Star Wars items out on the market! This book is organized very well. The book has 4 chapters: 1.Movie Saga, 2. The Clone Wars, 3. Specialists Sets, 4.Beyond the Brick (96 pgs total) It has pictures of all of the Star Wars Legos that have come out so far. There is a time-line that tells when each of the items came out, year by year and also episode by episode The pictures and descriptions are clear and colorful. Each of the Lego sets has a picture, the Lego #, number of pieces and the film episode. What more can you ask for? The book is hardbound and the cover has about an inch thick insert where the mini-figure is stored. This makes the book appear thicker than it actually is. I wasn't expecting that but the book is still nice and thick and full of great information for any Star Wars lover. A Great buy for under 15 bucks! This is a keeper for sure for my 7 yr old son who will be thrilled on his Birthday!

Published by Thriftbooks.com User , 13 years ago
Very nice hardback book with lots of stunning pictures of what else? Star Wars Legos! We are big fans of Legos in general and this book did not disappoint. It came with a bonus Luke Skywalker mini-figure. As with all DK books, you get great pictures, thorough descriptions, and just a generally enjoyable book to collect or read. I bought 2 copies of this book, one to read, and one to collect. The only thing that bothered me a (very tiny) little bit was how the Luke Skywalker mini-fig was packaged. At first glance it looks like a much thicker book, but about half of the thickness is a spacer placed inside the book to make room for the mini-fig, so it lays flush with the front cover. I posted some pictures on the main item page if you want to see what I mean. Nothing that I would knock a star off for though. Overall, we are VERY happy with this book. Great price for a quality book that will not disappoint young and old!
Trustpilot
Copyright © 2022 Thriftbooks.com Terms of Use | Privacy Policy | Do Not Sell My Personal Information | Cookie Preferences | Accessibility Statement
ThriftBooks® and the ThriftBooks® logo are registered trademarks of Thrift Books Global, LLC