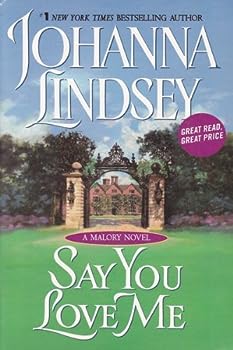 Say You Love Me

(Book #5 in the Malory-Anderson Families Series)

Published by Thriftbooks.com User , 17 years ago
I have to disagree with the low rating given to this story by other readers, because Ms Lindsey ensures that the hero Dereck is quite unique - he resembles his dad Jason, but he is not like his uncles James and Tony and his cousins-in law Nicholas Eden and Warren Anderson!!! Readers must use logic, after all, Ms Lindsey is quite correct/original because she she does not typecast her Malory men!!! why do other readers expect the same old personality-type like Nicholas, Tony and that exception and BEST Malory male: James? Heroes in the same series MUST BE UNIQUE TO ENSURE VARIETY!!! Dereck is absolutely perfect in his own way!And the beautiful Kelsey is my favourite herione after Georgina...My only disappointement is the fact that a little too much information on the previous couples in the Malory series. Dereck and Kelsey did not receive the type of attention readers should have expected!!!I adore the other couples whose previous respective relationships were magical! BUT THIS IS NOT THEIR STORY!!! Other than that, the novel was perfect...

Love is a perilous and rewarding gamble . . .

Published by Thriftbooks.com User , 17 years ago
_Say You Love Me_, the fifth book in the beloved Malory series, is the story of Derek Malory and Kelsey Langton. Though Derek has been a minor character in the background of the series, he definitely shines in this unique Regency romance. Derek Malory, heir to the Marquis of Haverston, is following fast in the footsteps of his two rakehell uncles. Though more gentle and kindhearted in his love affairs, he is definitely a man interested in pleasure for pleasure's sake. Unlike other reviewers, I found it exhilarating to have a hero who wasn't an alpha male. Beyond popular belief, not all women are attracted to overbearing brutes and that's usually the type of hero you find in this genre. Derek Malory is a cut above the rest. Kelsey Langton, though gently bred, must sell herself in a house of pleasure to save her family. Ignorant in the art of love, Kelsey is forced to act as mistress to the man who buys her. I was extremely impressed with Kelsey's character. She's strong, brave and self-sacrificing. In a genre full of selfish, conceited heroines Kelsey shines. I've read numerous Regency-era romances, but _Say You Love Me_ is far from being a cardboard copy of the rest. The premise is interesting, the mystery intriguing and the love between Derek and Kelsey is sweet without being sugary. In fact, I found the entire book uniquely pleasurable -- I could scarcely make myself put it down. _Say You Love Me_ would be an amazing story on its own, but it's even better as an addition to the Malory family saga. All of the previous characters are involved in the plot and help move the story along. As usual, their wit and charm make for an outstanding adventure. Over the last 10 years I've come to expect great things from Ms. Lindsey and once again she's proven why that is. She creates memorable characters, puts them in fascinating situations and ties it all together with excitement, passion, romance and humor. I highly recommend this book to all fans of the Malory family.

#5 of the Mallory Series

Published by Thriftbooks.com User , 21 years ago
Orphaned, Kelsey Langston and her young sister go to live with their aunt and uncle. One night, Kelsey finds her drunken uncle contemplating suicide. He his lost all of the family's money. He convinces Kelsey to sacrifice herself by becoming a rich man's mistress. For the love of her aunt and sister, Kelsey does. Derek Mallory notices an auction going on in one of the gentlemen's clubs he is visiting. A pretty, blushing girl is being auctioned off and the high bidder is Ashton, a known sadist. Unable to let the girl go to such a violent man, he bids on her and wins a mistress. But there is something about this young woman. Her speech and mannerisms are too fine. Surely she isn't a Lady. Derek soon realizes that he enjoys his mistress' company, but trouble is afoot. Ashton doesn't like losing to Derek. He intends to have Kelsey for himself. And he intends on punishing her for not belonging to him.Kelsey is gentle, kind-hearted, resourceful, and charming. She is a very likable character and easily falls in love with Derek. Derek is protective, sexy, and caring. An absolute fantasy man. He and Kelsey sizzle together! A perhaps improbable story, but that is what it is. A tale of passion and love coming through. A wonderful addition to the Mallory books.

The Malory's are the best!

Published by Thriftbooks.com User , 21 years ago
I received all the Malory novels for Christmas, just as SAY YOU LOVE ME was released in hardcover. I read them all, and went out and bought this book, as I could not wait until she published it in paperback. I am a huge fan of family series, and this one is fabulous. I love all the male characters, and their feminine counterparts are extremely exciting as well. I especially love how Reggie's two uncles continually berate Nicholas, years after they were married. I wanted to add, for the reader in Rochester, NY, who submitted her review on Feb 12, that the order for the Mallory novels is as follows: LOVE ONLY ONCE, TENDER REBEL, GENTLE ROGUE, THE MAGIC OF YOU, SAY YOU LOVE ME, and THE PRESENT. Hope you all enjoy them as much as I have!

Say you love me

Published by Thriftbooks.com User , 21 years ago
At first I had bought the audio tape and love it and then I bought the book because the book has more detail. After buying the book I realized that I had read another Malory book (Gentle Rough) and now I have bought the whole set and very soon I will read all of them, even the new book Present.
Copyright © 2020 Thriftbooks.com Terms of Use | Privacy Policy | Do Not Sell My Personal Information | Accessibility Statement
ThriftBooks® and the ThriftBooks® logo are registered trademarks of Thrift Books Global, LLC