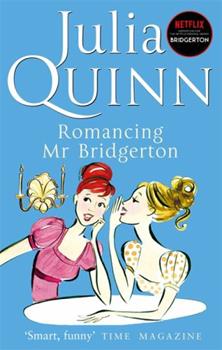 (Book #4 in the Bridgertons Series)

A New York Times BestsellerFrom #1 New York Times bestselling author Julia Quinn comes the story of Colin Bridgerton and Penelope Featherington, in the fourth of her beloved Regency-set novels... This description may be from another edition of this product.

Published by Crystal , 2 months ago
This book was a fun, quick read. Colin and Penelope's story is rooted in deep friendship and regard for one another. Watching Colin allow himself to see Penelope as someone other than his sisters friend was successfully written. It is one of my favorites of the series as both characters evolve into such strong versions of themselves.

I couldn't wait for Penelope's story!

Published by Librarypatronus , 1 year ago
I couldn't wait for Penelope to get her happily-ever-after, she's a perfect cinnamon roll and I love her cameos in the previous books, even as they made my heart break for her a little. I love a friends to lovers vibe, a shared history, and this one was so good. I think Colin's change of feelings was a little abrupt, and I didn't like how the plot of hunting for Lady Whistledown played out

Published by Thriftbooks.com User , 19 years ago
Penelope Featherington has loved Colin Bridgerton (3rd of the Bridgerton clan) since she was 16. He never paid much attention to her and she knew that she could never have a man like him. She wasnt beautiful by society's standards and she was just a tad chubby when she was introduced to society in order to gain a husband. Unfurtunately, no one looked her way and Colin only danced with her in those balls out of pitty, and because his mother order him to (and you dont mess with Lady Bridgerton). 10 years later Penelope is 28 and used to the idea that she's a spinster and she will remain so. Colin has barely seen her in those 10 years since he spends too much time traveling, but when he returns he sees a different Penelope, because she is slowly starting to speak her mind instead of being so quiet as she used to. There's much more to the story. The plot is so entertaining I skipped a study session for a final so i could keep reading the book. I simply loved everything, the characters are well written, the plot is great, the dialogue is fantastic as well as funny and tender. In short this is my favorite JQ book! Highly recomend it! Plus there's a very interesting surprise as well! and Lady Whistledown is more superb than usual!

At Last!! Colin and Penelope's story!!!

Published by Thriftbooks.com User , 20 years ago
Romancing Mister Bridgerton is probably the most highly anticipated book in the Bridgerton series. Like everyone else, I have been antsy waiting for Colin and Penelope's story.I am happy to report that it was well worth the wait!! Julia Quinn weaves a very mature and romantic story of the handsome, witty third Bridgerton brother and the wallflower who has adored him all her life.As you read this tale, you will quickly see that there is a lot more to Colin and Penelope than anyone ever thought or suspected. Both of them possess secrets that will surprise and shock the other, as well as bond them in a way that is beyond either of their dreams. To top that off, Lady Whistledown is at it again. But has her day of reckoning come? And, will we finally get to unmask the ton's worst nemesis?I feel this book is for all the "unattractive" girls who got looked over because no one could see beneath the surface. And, it makes one believe that unrequited love can be fulfilled. This is the best in the Bridgerton series so far. With 3 more unmarried Bridgertons and 1 widowed, I am sure Ms. Quinn will allow us to visit this prolific, warm, and loving family once again. I can't wait to find out where Eloise runs off to.

the best in the series so far, I thought

Published by Thriftbooks.com User , 20 years ago
Sometimes, when an authour gets tied to a series, the later books become formulaic and a little boring. Fortunately, this was not the case with Julia Quinn's latest romance novel, "Romancing Mr. Bridgerton." This latest installment about the Bridgerton siblings was well worth the wait (I think that it took slightly more than a year for this novel to be published), and is, I think, the best book in the series so far. This novel is a wonderful mixture of romance, poignancy and whimsy. I fairly devoured the book, and was quite saddened to have finished it so quickly. I was also left with the fervent wish that there were more novels like this one out there for me to read.Miss Penelope Featherington has been in love with her best friend's elder brother, Colin Bridgerton, ever since she was sixteen. Unfortunately, Penelope is not a raving beauty, or a gregarious, charming wit. Somewhat quiet and shy (and a little plump), Penelope is the sort of young lady that fades into the woodwork, and not at all the type to cause Colin's senses to swim. The years pass (about 12 to be exact) and Penelope has resigned herself to both remaining a spinster and having her love remain unrequited, when Colin Bridgerton, who has taken to traveling extensively in order to escape his managing mother's attempts to marry him off, returns from Cyprus. Now, Penelope sees Colin almost everyday, and at every social do. She discovers that she is as deeply in love with him now as she was all those years ago, and wishes fervently that she was the kind of woman who could ensnare his affections. However the Colin who came back is also slightly different -- restless, bored and a little discontented with the manner in which his life in unfolding. And while Penelope enjoys the time that they spend together, she cannot help but wonder how long she will be able to continue hiding her love for him? After having spent so many years abroad, Colin Bridgerton returns to England, hoping to find something that will chase this ennui away. Who would have believed that his thoughts would be full of shy, quiet Penelope Featherington? And that he would enjoy her intelligence and dry wit to such an extent? Somehow, Penelope touches him in a manner that no other woman has before. And he finds himself wanting to protect her from the cruel and careless ways of the ton. His deep affection for Penelope, however soon begins to disturb him. Could he be falling in love with his sister's best friend? And does he even want to be in love?Reading "Romancing Mr. Bridgerton" made me understand why so many other readers rave about Julia Quinn's talents. This was an entirely delightful and appealing read. I loved the manner in the authour made this novel to unfold. Julia Quinn took great pains to first allow for Penelope's and Colin's friendship to be reestablished by allowing them to have some really meaningful conversations, where they actually discuss things (like his boredom and her unhappiness over always being o

My Favorite Since Viscount

Published by Thriftbooks.com User , 20 years ago
Probably a great many people will disagree with me when I say that prior to this book my favorite in the Bridgerton series was Viscount Who Loved Me. I don't think a great many will disagree with me when I say that Romancing Mr. Bridgerton has replaced Viscount as my favorite Julia Quinn novel and therfore my favorite romance novel, period. The dialouge between Penelope and Colin was even more snicker inducing than Viscount and this book had the added advantage of a slight mystery (Lady Whistledown's identity) to keep the reader entralled. Colin, always my favorite Bridgerton brother, is finally characterized as something other than the easy going, charming third brother that he is pictured as in the other books and Penelope grows from a tongue-tied wallflower to a woman with enough spine to suit anyone. The characters in this book are believable, likable and at times downright laughable. As for the identity of Lady W, never fear. All is revealed, but to mention her name in this review would deprive readers of the pleasure of finding out for themselves. A note to those who haven't read any of the other Bridgerton novels I would suggest you do so prior to reading this one. Not because it is vital to understand the story but because it will help you to understand the dynamic of the Bridgerton family and bsides, each of them is an excellent book well worth reading.

The unveiling of Mrs. Whistledown

Published by Thriftbooks.com User , 20 years ago
What a fantastic story. I will admit that I stayed up past midnight, as I could not put the book down once I started it. JQ does Penelope (and Colin) proud. From being an over ripe citrus fruit to an amazing young woman JQ shows how this has unfolded. While in some ways this book is more for Penelope than Colin I think it is a great. The story unfolds as Colin has come home after being in Cyprus... Penelope is now a confirmed "on the shelf spinster" but still a wonderful friend. And of course there is Lady Danbury as outspoken as usual. This time she even sets forth a challenge that has the entire Ton talking.I will warn you this book will finally reveal the true identity of Lady Whistledown which will make for some surprising twists and turns. But, overall watching Colin realize what a wonderful woman the "wallflower" Penelope has become is some of the best reading I have had the pleasure of in recent months. I can hardly wait for Eloise's book!
Trustpilot
Copyright © 2022 Thriftbooks.com Terms of Use | Privacy Policy | Do Not Sell or Share My Personal Information | Accessibility Statement
ThriftBooks® and the ThriftBooks® logo are registered trademarks of Thrift Books Global, LLC