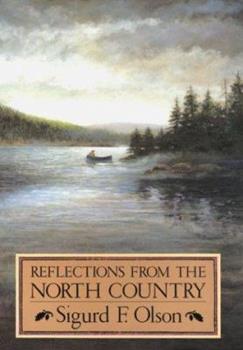 Reflections from the North Country

Written in the last years of his life, Reflections from the North Country is often considered Sigurd Olson's most intellectually significant work. In an account alive with anecdote and insight, Olson outlines the wilderness philosophy he developed while working as an outspoken advocate for the conservation of America's natural heritage.

Published by Thriftbooks.com User , 15 years ago
This book consists of 28 essays, each a few pages long. The essays discuss general themes related to the outdoors, with reference to the North Country from Minnesota to Alaska. Olson is a marvelous writer, and the essays are captivating. The book is divided into three parts: "Primal Heritage," "Search for Meaning," and "The Imponderables." The first group of essays ruminate on themes such as nomads, hunter-gatherers, silence in the woods, and the implications of these themes for modern life. The second group on meaning concerns one-word themes such as harmony, aliveness, beauty, and simplicity. These essays would provide an excellent basis for discussion in a book group or a classroom setting. The third group is the least successful, and moves to a poorly-developed religious climax. In earlier essays in the book, Olson revealed himself as a Christian who sees the beauty of God's creation in the great outdoors. In the third part he moves toward a more synthetic position, finding common ground among many religions. That's fine, but it leads him to two essays on an "emergent God," which don't really work. He is a nature writer, not a theologian, and it shows. Though many of his themes are timeless, such as the need for people to discover their true nature away from their urban lives, Olson discusses many anachronistic practices. When he would arrive in camp, his chores might include cutting pine boughs for a mattress, chopping down a tree for firewood and tent poles, and other destructive practices. Those are no longer possible. Olson also reveals himself as a man living in a patriarchal time. He would disappear into the woods for weeks or months at a time, leaving his family behind. In this book, he mentions his son Sig several times but never mentions his wife, who presumably raised Sig and managed other household chores. Olson also sings the praises of his canoe-makers, and the joys of simple food in the backcountry such as rice, beans, and meats, but he does not raise any of that food himself. This reveals him as being connected to a wider economy and to people such as farmers who cannot disappear into the woods as he can. Would Olson have been able to live his life in the woods without his wife, farmers, canoe-makers, and others living their lives in a house? The thought never crosses his mind, but we should ponder it.

Published by Thriftbooks.com User , 18 years ago
This book compiles some of Olson's best writings. In it, his last book, Olson further explores the concept of self-reflection and self-discovery through wilderness solace. His writing will be of interest to anyone who enjoys the outdoors (especially canoeing), but also readers who enjoy general contemporary philosophy.

Published by Thriftbooks.com User , 19 years ago
although the theme here is obvious. the thing i liked best about this book was how it brought attention to the many overlooked things in life. a must read for outdoor enthusiasts

Published by Thriftbooks.com User , 23 years ago
I first learned about Olson from a canoe instructer. On overnight camping trips he would often read a passage from Sigurd Olson to get us to reflect on the beauty of nature around us. Olson's work has a charisma that can not be found by any other writer. Reflections of The North Country was the first of Olson's books that I have had the privledge to read. I read the hardcover version, and found it to be food for the soal. In the hectic modern world that we live in today it is wonderful to learn from the wisdom of the ages, and get back to nature. Reflections is a compilation of beautifully writtin essays written by the late Sigurd Olson as he neared the end of his life. He looks back on the bygone era, and lure of the old French Canadian Voyageur, and describes many of his own voyages by canoe. I would recommend this book and others by Olson to anyone who loves the outdoors.

Published by Thriftbooks.com User , 24 years ago
Here in the late twentieth century as the pace of life seems to quicken daily, Sigurd Olson's "Reflections from the North Country" offers a calm refuge and thoughtful perspective with which to deal with our hectic world. Olson was an outdoorsman and sage, and has provided in this book a series of essays drawn from his lifelong love affair with the great out of doors. The truly refreshing aspect of the book is its ability to drop a mantle of calm around the reader. In simple, evocative language supported by obvious deep thought Olson helps one reflect on the pace and values we keep today. Essay titles such as Timelessness, Great Silences, Search for Meaning, Harmony, Beauty, Freedom, Contemplation hint at the breadth of this book. If interested in retreating from and reflecting on our world today, this is an excellent companion with which to do so. Though written more than twenty years ago, it is timeless in its ability to reach deep into our souls.
Trustpilot
Copyright © 2022 Thriftbooks.com Terms of Use | Privacy Policy | Do Not Sell My Personal Information | Cookie Preferences | Accessibility Statement
ThriftBooks® and the ThriftBooks® logo are registered trademarks of Thrift Books Global, LLC