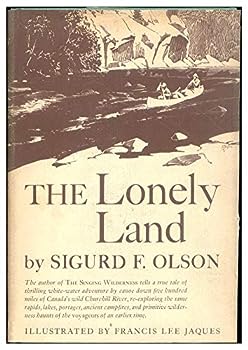 This description may be from another edition of this product. "There are few places left on the North American continent where men can still see the country as it was before Europeans came and know some of the challenges and freedoms of those who saw it first,...

Who knew a canoe trip could be so interesting?

Published by Thriftbooks.com User , 12 years ago
This book is an account of Olson's canoe journey down long stretches of the Churchill and Sturgeon Weir rivers in Saskatchewan. Olson was a leading popularizer of the notion of wilderness, associated with the North Country of Minnesota and Canada. The story of someone else's canoe journey risks being mind-numbingly boring: "we paddled, portaged falls, and then paddled some more." Olson's story isn't any different than that basic narrative, but he manages to make the journey more lyrical. Observations about the empty land they traverse, the comraderie of the company of six, reminiscences of the voyageurs of old, and occasional encounters with other people leaven the basic narrative. It's a great read, and I literally didn't put it down (I was stuck on a transatlantic flight, but even so). Heartily recommended.

Published by Thriftbooks.com User , 14 years ago
I first obtained this book in my youth through the old Outdoor Life Book Club (which also introduced me to other classics such as John J. Rowlands' Cache Lake Country). I'm not sure I read The Lonely Land all the way through at that first encounter, but I recently rediscovered it when cleaning out a family home. I picked it up out of nostalgia, but I soon found that I couldn't put it down. Apart from the inherent interest of its subject matter -- the majestic wilderness of central Canada's Churchill River drainage -- I was quickly taken by the immediacy of Olson's account. The wind, the waves, the thunder of approaching rapids all spill off the page in vivid detail, as do the detailed descriptions of each night's camp and its routines. As compelling is the exuberance of Olson and his five companions as they explore pristine lakes, shoot the Churchill's wild water, and find refuge time and again on the solid, reassuring outcrops of the Canadian Shield. Finally, at each stage of the journey, Olson quotes from the journals of those who came before him, the "bourgeois" who led the brigades of voyageurs into the heart of the Lonely Land in search of furs. Men like Alexander MacKenzie, George Simpson, and David Thompson, who worked for the Hudson's bay Company or its competitors: the record of their observations informs Olson's account with vivid descriptions of the land as well as a sense both of how much and how little had changed over the one hundred and fifty years since they had last paddled, poled, and lined their way up the same great river system. I know that Olson has many well-regarded books to his credit, but a new reader could do worse than enter this world of woods and water by way of The Lonely Land.

One of the best books I have ever read

Published by Thriftbooks.com User , 21 years ago
I was looking on information on old canoe routes of the voyageurs and I came upon this book. It tells the experiences of Olson, a famous naturalist of the 50's and 60's, and 5 of his friends, as they paddle three wood and canvas canoes down 500 miles of the Churchhill River in Saskatchewan in 1960. Olson describes the setting and experience so completely, including diary entries of famous fur trappers who traveled the same route, that I have thought of nothing else but going to see the country he describes, the Canadian Shield of Northern Saskatchewan. It is a different place now than it was 40 years ago, less lonely I imagine, but still something I must do. I would recommend this book to anyone who longs to experience this land, North America, before it became overpopulated.

I wish I was there!

Published by Thriftbooks.com User , 21 years ago
After I read this book I had a burning desire to visit the Canadian Shield and paddle a wood and canvas canoe on the Churchill River. I only wish I could have done it in 1960, when this book was written. It is a much different place today. This is an excellent book about a canoe trip of 500 miles by six friends. I only hope I will be as lucky to do such a trip someday.

The best of Sigurd Olson & the Northwoods

Published by Thriftbooks.com User , 22 years ago
This is a book I can pick up and read anytime I need to feel the fresh clean air of the Canadian Northwoods. Olson & 5 other experienced and accomplished comrades follow the route of the early Voyageurs down 500 miles of the wild Churchill river. A bonding of men, rich in history, enough adventure to stir the imagination of any outdoorsman or armchair adventurer. I have read this book many times, it has become a comfortable old friend.
Copyright © 2020 Thriftbooks.com Terms of Use | Privacy Policy | Do Not Sell My Personal Information | Accessibility Statement
ThriftBooks® and the ThriftBooks® logo are registered trademarks of Thrift Books Global, LLC