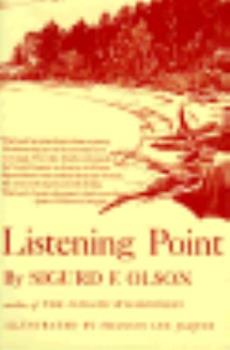 Listening Point is about the spiritual human connection to the environment. "Each time I have gone there I have found something new which has opened up great realms of thought and interest", Sigurd F. Olson writes. "For me it has been a point of discovery and, like all such places of departure, has assumed meaning far beyond the ordinary". Considered by some to contain Olson's most vivid and moving passages, Listening Point is the nature lover's companion...

Published by Thriftbooks.com User , 12 years ago
Thank you for the great service. Prompt shipping; product exactly as described. Thank you!

Not Just a Biology Teacher from Minnesota

Published by Thriftbooks.com User , 20 years ago
Sigurd Olson wrote better than most people about the great northwoods covering the area of Canada and the North U.S. between Minnesota, Wisconsin, and the U.P. His focus was the Lake Superior/Quetico country, and he carefully catalogues everything from the geological substrate, to the soil, to the plants and trees, the animals, the waters, and the canoes he paddles over them. Open this book and he's the Swedish guy pulling his canoe up on a favorite ledge of rock, taking a carefully measured sip of some brandy, and cooking a few fish to have with some coffee, all the while describing the sky, the traces of various minerals on the rocks, and then turning in for the night.There are many such gentlemen of the North, but it seems like they are hard to get to know. Olson (typically pictured on his books in a clean crew-cut and pressed Khaki or woolen shirt) does us the courtesy of introducing himself with his measured observations of the country he explored for so many years between time spent teaching biolgy at a community college in Ely, Minnesota.Listening Point was his place to return to from his various travels, and from his usual home in Ely. He describes both the physical dimensions and actions needed to build it (how big a cabin, which direction to face and why, how the bulldozer made teh road, how certain boulders and trees were moved or destroyed), always with references to the wider dimensions of the North, and the great Cambrian shelf all along the North of Lake Superior. His style is partly in the mode of the serial "digressions" which fit around a theme, seen in many classical writers (pre-medieval, Roman & Greek). Paired with the physical descriptions are the theoretical meditations on which modern appliances to have, and which to exclude, for the spiritual benefit of he and his wife (telephone, no; phonograph, yes).The natural impression from all of this is to want to find your own Listening Point somewhere, or at least to get up to this area to see the things he writes about. The broader message here is that you don't have to own the places you explore, and the places you adopt as your own, to appreciate the tremendous beauty and stunning scale of our great northwoods. This is something easy to take for granted for those who live in this part of the U.S. Actually, there is nothing else in the entire world like our Great Lakes, and the only forest area on the globe comparable to the U.S./Canada Northwoods is an area of Siberia. That's it. And this man is an excellent guide to it. Although limited in his writing to a kind of transcendentalist Thoreau-style of abstruse maybe-theism, Olson's writing nevertheless addresses the spirit with great force. He achieves a connection with the old Indian belief systems, and reaches congruence with an explicit Christian worldview at least insofar as he expresses great reverence for a creation which dwarfes the hubris of mere man.Interestingly, this book, as well as his others, I fin

Every chapter took me back there!

Published by Thriftbooks.com User , 21 years ago
I had the opportunity to spend a week in Canada, north of the Quetico area and every chapter in "Listing Point" took me back there.Each chapter is about sights, sounds, and memories tied in with his Listening Point, the rocky point on the northern Minnesota lake on which Olson built his cabin. I enjoyed this book very much. The book is a mixture of northwoods history, philosophy, and nature writing. His descriptions of nature around him are done in such a way that you get a real feeling for the grand scale of the northwoods, and how time, in nature, means something different than it does to most of us most of the time. Be aware, it is not some action packed adventure. Rather it is a quiet, calm book which causes you to sit back and reflect, even if you are not an outdoorsman.As each chapter stands on its own, it makes great reading at lunch or before bed. The chapter called Canada Jack is a favorite and Far Horizons, the last chapter, is an artistic statement of the whole theme of the book.
Copyright © 2020 Thriftbooks.com Terms of Use | Privacy Policy | Do Not Sell My Personal Information | Accessibility Statement
ThriftBooks® and the ThriftBooks® logo are registered trademarks of Thrift Books Global, LLC