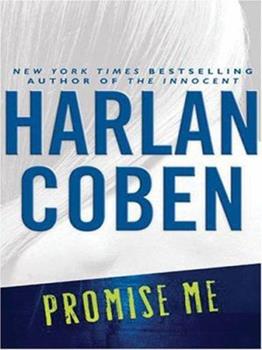 (Book #8 in the Myron Bolitar Series)

A New York Times Bestselling AuthorBecause of a promise, Myron Bolitar is in a lot of trouble. Determined to help keep his friends' children safe, he promises neighborhood girls that if they ever get into a bind and don't dare to call their parents, they can call him, anytime. When the call finally comes at 2:00 a.m. several nights later, Myron picks up one of the girls and drives her to a quiet cul-de-sac in New Jersey where she says a friend lives...

Published by Rebecca , 10 months ago
I've read many of Harlan Coven's books, but I was sorry I bought this one! Read about 50 pages and gave up.🙁

Published by Thriftbooks.com User , 15 years ago
This is the second book that I've read by Coben and I was immediately engaged by the people and the story line. He manages to weave an intricate plot without dropping characters along the way, overly complicating matters, confusing the reader and developing shallow protagonists. I loved Myron and will look forward to reading about his previous adventures. The basic premise of this one is that one night, without thinking about the consequences, 42-year-old Myron Bolitar, an ex-athlete turned entertainment lawyer, overhears a conversation between two teenage girls, one of whom he knows quite well. They're talking about drinking. It's senior year in Bergen County, New Jersey (where I grew up, BTW!) And the number one priority for affluent parents and their children is getting those teens into a decent university. Myron remembers that a classmate in his high school never made it because she was killed by a drunk driver. He makes the girls promise him that if they're ever in trouble in the middle of the night, they can call him at any time -- no questions asked. Little does he anticipate where that promise will lead him and us, the readers. Much like his other book, whose name I have forgotten, this was a page turner. I will put Coben at the top of my list and go back to read his other books. Very well done and highly recommended, although it stretched the imagination a bit at times. Sigridmac author of D'Amour Road

Published by Thriftbooks.com User , 16 years ago
I first became acquainted with Harlan Coben's writing in an encounter with one of his gripping stand-alone novels. The couple of novels I had read were excellent. This is my first encounter with Myron Bolitar. It will not be the last. This is a well-constructed novel with amazing plot twists and turns. It is virtually impossible to guess the "villain" so cleverly written is the novel. You almost feel that the final twist is simply not believable but on reflection you can see that the seeds are there but there lots of red herrings along the way. I'll be picking up the earlier Myron novels as soon as I can get my hands on them.

Welcome Back Myron and Gang

Published by Thriftbooks.com User , 16 years ago
Several years ago I emailed Harlan Coben and told him Myron Bolitar should have been the blueprint God used to create all men. I still feel the same way. I have missed Myron and Win and all the zany characters that make up Myron's world. Once again Coben has written a story with twists and turns that kept me guessing and surprised at the ending. I read the book in two days because I could not put it down and thought about it when I was away from the house. I just hope we see a lot more of these characters.

Bolitar is back in Coben's brilliant new thriller!

Published by Thriftbooks.com User , 16 years ago
I was very excited to learn that Mr. Coben was bringing back the character of Myron Bolitar after a long absence, that I order my copy months ago and was very happy to see it arrive a day before the publication date! After two nights of page turning thrills I am happy to say that it was worth the wait! Coben's characters and dialog are as sharp as ever. Myron is trying to be a good guy and has for the last 6 years. But when he over hears the teenage daughter of the woman he is dating talking to her friend about being driven home from parties by drunk and stoned friends, Myron makes her and her friend an offer. He tells the girls he will offer them a no questions asked taxi service to and from parties. The problems start for Myron when he drops off one of the girls at New Jersey cul-de-sac wear she claims her friend lives. The next day the parents of the girls report the girl as missing, and guess what?-Myron was the last person to see her alive! Poor old Myron is back in trouble again. The book takes off from here with Coben's trade mark style (and I do mean style) with plenty of twists, turns and suspense. Its an over used cliche, but this is a truly a page turner!
Trustpilot
Copyright © 2022 Thriftbooks.com Terms of Use | Privacy Policy | Do Not Sell or Share My Personal Information | Accessibility Statement
ThriftBooks® and the ThriftBooks® logo are registered trademarks of Thrift Books Global, LLC