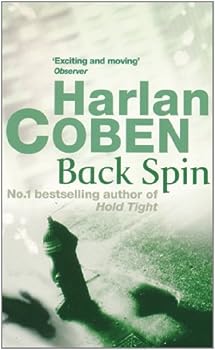 (Book #4 in the Myron Bolitar Series)

Kidnappers have snatched the teenage son of super-star golfer Linda Coldren and her husband, Jack, an aging pro, at the height of the U.S. Open. To help get the boy back, sports agent Myron Bolitar... This description may be from another edition of this product.

Published by Thriftbooks.com User , 15 years ago
Harlan Coben spins a dramatic series with Myron Bolitar that out does Evanovich's Plum. It's intelligent and yet funny, funny. I intend to read the entire awesome Bolitar series.

Plot Spins and Spins Taking You on the Ultimate Adventure

Published by Thriftbooks.com User , 18 years ago
Myron Bolitar, MB Sports Rep returns for another fast paced can't put down adventure with so many twists in the ending you feel like you're in a backspin. This time round Myron's at the US Open golf tournament. Not a huge fan of golf he doesn't really want to be there but Win tells him it is an excellent opportunity for clients. Turns out Win's right, but for personal reasons Win doesn't want Myron to accept this case. Myron can't say no though, so he's on the case of kidnapped spoilt rich kid Chad Coldren, who is the son of the top female Golf player Linda Coldren and her husband tournament choker Jack Coldren who is leading the US Open for the first time in 30 years. Of course not everyone likes Myron poking his nose where it does not belong and to Myron's disappointment Win is at the top of that list. Win of course would never harm Myron but others don't share that point of view. You don't have to be a fan of golf to enjoy this in fact if you don't like Golf Myron's comments along the way are so much funnier. This is one of the best Myron stories, you can read it as a stand alone novel but you'll get a lot more out of this book if you read the prior novels first. Also check out Coben's independent Masterpieces such as Tell No One as well as the rest of Myron's adventures including the next in the series One False Move.

Published by Thriftbooks.com User , 23 years ago
Please order all of Harlan Coben's Myron Bolitar novels at once. Not only will you read about the world's most honorable sports agent Myron Bolitar but you get a murder mystery to follow as well as some memorable characters to cheer for. The mysteries are excellently written, hilarious and fast-paced. Once I started reading the book, it is hard to put it down, so I didn't, I finished it the day I received, as I did with the previous Bolitar novels. What draws me to this series is Myron's interactions with the people closest to him - his girlfriend, his parents, his assistant/partner(?) Esparanza and last but not least Win Lockwood - psycho-yuppie. I can only read books in the mystery genre and this is one of the best series ever. To all you potential Cobenatics - order all Bolitar novels at once! Please note that you can reserve the new novel - The Final Detail before its release in June. Hurry - catch up with Myron, Win (my favorite) and crew before the June deadline.

Coben Does it Again!

Published by Thriftbooks.com User , 24 years ago
This book is a thriller that you can't put down. I've been reading mysteries for many years, and have long since stopped staying awake until I finshed one. This was an exception. I didn't even regret losing a few hours sleep! It is best to read this series from the beginning so you will appreciate the development of the friendship between the two main characters. In Backspin, Coben not only gives the reader a fine plot, but delves into the psyche of Win and the acceptance of Myron. Even though I don't particulrarly like golf, I appreciated Coben's insight into the personality of a champion. This was not only a good book, I learned something. A must read for anyone who likes mysteries with depth and has a sense of humor.

Back Spin scores a hole in one.

Published by Thriftbooks.com User , 25 years ago
In Back Spin, Harlan Coben not only manages to provide a glimpse into the psyche of a champion (whatever their field of expertise), but weaves together a chilling tale of kidnapping, family secrets, and the beauty and eccentricity which is golf. While Myron Bolitar, sports rep and rival of Henny Youngman for king of the one-liners, attempts to enter the world of professional golfing at the US Open, he is more than a little side-tracked by frantically working to find the missing son of the leader of that prestigious event. This is a story of violence, in the graphic, physical sense and also in terms of betrayal; particularly the pain that family members can inflict upon one another. Back Spin also moves us along in our understanding of Myron, Esperanza and especially the charming, but lethal Win. For those already acquainted with those characters (in every sense of the word!), Back Spin is a "must read." For those not yet acquainted with this trio, or the author, you can look forward to a great story, with more twists and turns than the golf hole of your worst nightmares, and more empathy and eloquence than all the jokes and snappy come-backs might lead you to expect. Whatever the author's golf handicap may be, with this latest addition to the Myron Bolitar series, Harlan Coben shows he definitely qualifies as a Master of his craft
Trustpilot
Copyright © 2022 Thriftbooks.com Terms of Use | Privacy Policy | Do Not Sell or Share My Personal Information | Accessibility Statement
ThriftBooks® and the ThriftBooks® logo are registered trademarks of Thrift Books Global, LLC