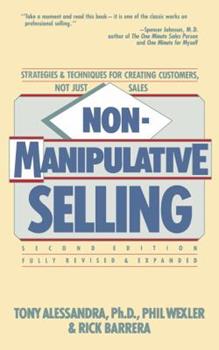 This description may be from another edition of this product. WHEN YOU HEAR the word salesperson, what adjectives come to mind? Typical responses to that question are “aggressive,” “overbearing,” “pushy.” Their common denominator is always negativity, even from...

Published by Thriftbooks.com User , 12 years ago
Arrived on time and in the condition advertised. Would buy from this source again. Thank you.

Published by Thriftbooks.com User , 16 years ago
Non-Manipulative Selling is a great overall book that includes some theory and a lot of tactical selling advice. It offers an overall emphasis on understanding behavioral styles. The goal of the book is to help the reader learn to sell with flexibility by adjusting to each prospect's style. The six-step selling process described by the authors is particularly useful. With its details on behavior styles, Non-Manipulative Selling will be beneficial for those involved in complex and transactional sales. This book is very congruent with TrustBuild Program philosophy and principles. Non-Manipulative Selling is a practical book, oriented toward the process of selling. The authors offer instruction on practice with every idea they present. The emphasis on practicality is not surprising when you consider that the book originated in 1975 as a seminar workbook. The authors note in the Preface that since the original publication, many others have written, spoken, and taught about non-manipulative selling. They feel, however, that most of those are trotting out a non-manipulative philosophy as a surface over the traditional sales hard sell approach. The book begins with five chapters that explore the skills a salesperson brings to his or her craft. With chapter titles like "Relationship Strategies" and "The Power of Listening, Observing, and Feedback," these chapters address the techniques required for non-manipulative selling. The authors then present six chapters on the sales process itself. These chapters cover subjects ranging from meeting the prospect to assuring customer satisfaction. The book concludes with four chapters on general sales skills, including chapters on "Selling by Style" and "Developing Self-Management Skills." It is one thing to assert that we are committed to ethical, trustworthy, and non-manipulative selling. It is another to actually put the principles and techniques to work in the field. The risks seem obvious: What if this doesn't work? Don't I have to press for the sale? After all, I need it. The strength of this book is that it gives both the background needed to understand non-manipulative selling and the practical advice needed to put it into practice. While this information will not eliminate all the stresses involved in moving to non-manipulative selling, it will remove a lot of the uncertainty about what is going on. I highly recommend Non-Manipulative Selling to all those who work in complex and transactional sales and who wish to improve their practical abilities to sell effectively and ethically. Robert Reed President TrustBuild
Copyright © 2020 Thriftbooks.com Terms of Use | Privacy Policy | Do Not Sell My Personal Information | Accessibility Statement
ThriftBooks® and the ThriftBooks® logo are registered trademarks of Thrift Books Global, LLC