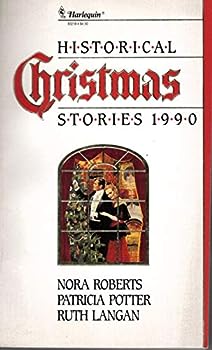 Historical Christmas Stories, 1990: In From the Cold/ Miracle of the Heart/ Christmas at Bitter Creek

(Part of the O'Neills & Hamptons Series)

Three great Christmas stories: In From the Cold by Nora Roberts, Miracle of the Heart by Patricia Potter, and Christmas at Bitter Creek by Ruth Langan. This description may be from another edition of this product.

Published by Thriftbooks.com User , 18 years ago
This CHristmas anthology includes one of the MacGregor series chapters- this one is about Minuteman Ian MacGregor. A must have for fans of this Scottish series by Nora Roberts!

Published by Thriftbooks.com User , 20 years ago
One of the short stories -- and #4 in a series -- I think of the Hampton brothers.MIRACLE OF THE HEART is the story of Rafe Hampton and Blythe Somers.Blythe has taken some ten orphans in the Shenandoah Valley, 1864 and is trying to give the children a pleasant Christmas.Seth Hampton, a doctor for the southern troops, the Mosby raiders, has dropped into Blythe's farm with a wounded General Massey. She knows that the Union soldiers will be looking for these two. But Seth has been supplying Blythe with what little food he could spare to help her support the little ones.Benji, at five is the youngest one, he came with his sister, Margaret who is eight. Then came Jaime, an embittered twelve year old asking for work in exchange for food and he ended up staying. Traumatized nine year old Suzie came, then Abraham and Micah, nine and eight year old brothers who had set out to find their father and found Blythe instead. Then cama Sarah, a house slave who had gotten lost and Katy and July, two like Sarah who had been sold.Danger came in the form of Major Rafe Hampton, whom Blythe had not heard from in two years. Eighteen months ago Rafe had been informed by a malevalant neighbor that Blythe was marrying his brother, Seth. He has become hard and bitter thinking that he has lost Blythe.Oh, what a story - really great, especially the way it was resolved --- look for Seth's story in HH Untamed: Maverick Hearts 1993. ---- series starts with Swampfire - Samara and Silver Link - All Harlequin Historicals.HIGHLY RECOMMENDED
Trustpilot
Copyright © 2022 Thriftbooks.com Terms of Use | Privacy Policy | Do Not Sell My Personal Information | Cookie Preferences | Accessibility Statement
ThriftBooks® and the ThriftBooks® logo are registered trademarks of Thrift Books Global, LLC