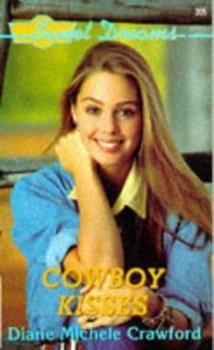 While spending the summer working at the Lucky R Ranch, Kenzie Sullivan falls for a handsome cowboy who bets her that she will not last one week at the ranch. This description may be from another edition of this product.

Published by Thriftbooks.com User , 19 years ago
Kenzie Sullivan never dreamed she'd be spending the summer of the Lucky R Ranch instead of hanging out with her friends at the country club pool. But in order to keep her beloved horse, Kenzie must work at the ranch to pay for his board.When fellow ranch hand Steve Calvert bets Kenzie that she won't last more than a week, she doesn't hesitate to take the bet. Though Steve's attitude drives her crazy, Kenzie is determined to show him that she's a capable cowgirl. But soon she finds herself falling in love with her rival. Can a country club girl ever win a stubborn cowboy's heart.***Excerpt***There was something very appealing about Steve Calvert, Kenzie thought as he draped an arm around her shoulders and led her into the barn. Once inside, Steve stood still. There was something in the way he looked at Kenzie that made her catch her breath. And then he kissed her.That unexpected kiss sent sweet chills through her. She responded instantly, thrilled by the touch of his soft lips on hers. The next thing she knew, Steve was pulling away as though she'd bitten him. "Sorry," he muttered. "That won't happen again." Abruptly he started walking down the aisle between the stalls, pointing out the horses that needed to be saddled. Kenzie stared after him. Why was he acting like they'd done something wrong? She wasn't at all sorry they'd kissed. But what if Steve hadn't liked kissing her?
Copyright © 2022 Thriftbooks.com Terms of Use | Privacy Policy | Do Not Sell My Personal Information | Accessibility Statement
ThriftBooks® and the ThriftBooks® logo are registered trademarks of Thrift Books Global, LLC